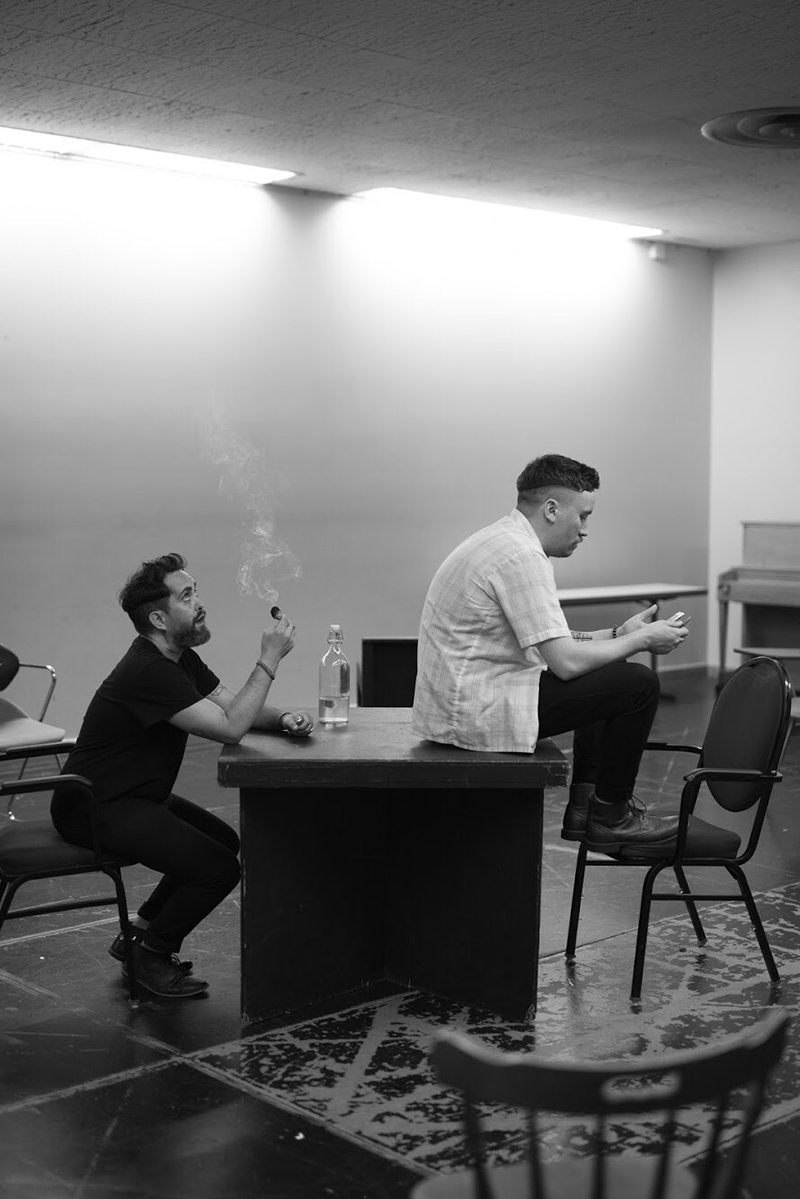 I still remember a piece of advice a mentor gave me about acting for the theatre versus television: In theatre you’ve got to exaggerate. Amplify your movements to help your work play across the entire crowd. In TV, the camera can close in. You can afford the subtlety. For a live crowd, you have to be not only large but constantly in connection with the audience.

The Aliens is a performance that’d be subtle enough for TV but is still connective enough for theatre. “Half of this play … is silence,” writes playwright Annie Baker, and it’s true. It works in this production because the audience is so close. I sat in a single circle around a wooden picnic table and garbage can that comprised the stage. This was somewhere in Vermont, and two men, Jasper (Austin Archer) and KJ (Whit Hertford), sit together and stew in silence for a while before saying anything. KJ plays with a lighter while Jasper pores over his phone. Baker’s writing supports this sort of silent, antisocial dynamic—after spending several minutes in silence, I felt Jasper’s nervous energy and KJ’s neuroticism. Eventually, KJ asks Jasper if he “wants to talk about it.” He says no, but it’s too obvious he does. “I think she’s actually crazy, you know?” He’s happy about the breakup, actually. Of course he’s happy about it. Gives him more time to work on his novel, more inspiration, more material. She called him a genius once, Jasper says. KJ agrees, supportive, though not entirely understanding.

It’s a friendship that feels funny at first and then quickly depressing. It’s not a particularly healthy relationship. Jasper and KJ feel estranged from each other, always referencing past connections and memories. It’s not until Evan (Aidan Croft) enters the picture that the two feel like real friends. Evan’s a 17-year-old working at the coffee shop where Jasper and KJ are bumming around, and he acts like a little cop. “You guys can’t be back here,” he says quietly. “This is kind of, uh, just, you know, for staff only.” The two stare back at him blankly, silently saying, “So?” They quickly conscript him into hanging out with them, two 30-somethings, the next night, Fourth of July. KJ and Jasper do actually vibe more authentically against Evan’s mere presence, but the three constantly dip and rise, never truly meshing well together. Evan’s naïveté puts a lens on the two—Jasper’s reverence for Bukowski feels like something he should have outgrown, and KJ only seems more carefree compared to Evan. But while the three quickly become friends, it’s not because they listen to each other or have much in common. The aliens are not people who share consistent intimacy—they are people who feel a familiar isolation in each other’s presence.

The title comes from the Bukowski poem, and so appropriately, The Aliens feels like a constant series of missed connections, three ships inexplicably passing each other in the night. But if there’s a thesis here, it’s that even a broken clock strikes twice a day: The frictionless moments feel extra cathartic precisely because almost every interaction feels like people existing and speaking at one another instead of with each other. The title The Aliens doesn’t even feel on the nose because the alienation is so ingrained. A defining part of alienation is the moments where you see the potential for real connection exist only to peter out or implode completely. To feel alienated isn’t to be alone; alienation is to feel separated, cut apart. As the three friends end their Fourth of July, Jasper and Evan stand and watch as KJ lights a sparkler, and we watch the slow, alluring burn, die out as fireworks thunder in the background.

The stage framing is part of what ultimately makes the three-character relationship so engaging. Where you choose to sit determines the way the scene is framed, whether you see characters’ front or back, a classic shot-reverse-shot, a completely obscured moment or a whole interaction a foot in front of you. It’s a live dynamism you can only get in theatre, and it occurred to me, at one point, that other people in my audience were seeing every scene play out from a different angle—and that fact in itself felt somewhat alienating. I knew that the people across from me could and were seeing me, but I had only the fleeting sense of being seen.

The Aliens is like a series of intersecting sine waves, flickers in a sea of debris.