An Enemy of the People / Andy Rindlisbach as Thomas Stockman. Photo: Haley Hoover

Riot Act Takes On An Enemy of the People

On the heels of their an interactive LGBTQ+ retelling of Romeo and Juliet, HØÜSES, Riot Act Theatre returns to The Wherehaüs (formerly CUAC) to present An Enemy of the People, another present-day adaptation by Artistic Director Whit Hertford. This time, Hertford tackles Henrik Ibsen’s 1882 play of the same name, an ever-relevant drama that offers an at times scathing commentary and critique on the individual versus the collective, action versus inaction, whistleblowers and accomplices.

Hertford’s contemporary adaptation places An Enemy of the People in a city that could very well be Salt Lake—with all its rampant air pollution—at the home of Thomas (Andy Rindlisbach) and Katherine Stockmann (Allie Russell). They’re meeting with their friends, Hovstad (Aaron Kramer) and Billing (Jerry Costner), who work together on a local independent newspaper and share in Thomas’ idealistic and subversive views. While Katherine, Hovstad and Billing discuss the recent construction of a zero-emission refinery, Thomas finds out that the plastic in the refinery contains phthalates: toxic chemicals that cause alarming health problems, such as infertility in men. It’s a difficult situation for Thomas, whose brother, Peter (Roger Dunbar), the mayor of the city, is spearheading the town’s support for the refinery; and whose father-in-law, Morten Kiil (Stephen Williams), manufactures the phthalate-contaminated plastic. 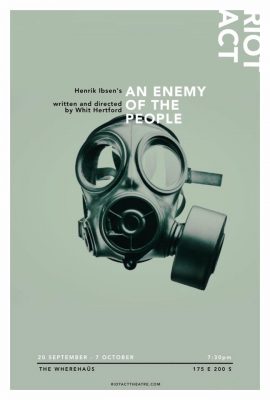 Embroiled in his unyielding conviction that the public has a right to the truth, however, Thomas details a report for Hovstad’s newspaper to expose the refinery. Hovstad and Billing lend Thomas their full support, lauding him as the genius renegade necessary to incite long-overdue change. (Even the paper’s new employee, the wishy-washy and people-pleasing Aslaksen, played by Hertford, lends his support, however cautious and lukewarm.) But when Peter pays a visit, he reveals the truth’s enormous consequences: thousands of jobs lost, additional millions of dollars culled from the public, a massive scandal that would doom the future of the city.

Peter’s reveal is enough to change everyone’s minds but Thomas’, who becomes all the more relentless and unswayable in his utter surety, coming off as contemptuous and arrogant in his self-righteousness. Things come to a head when the characters call for a town hall meeting.

Hertford does well here with the tightly directed and adapted An Enemy of the People and its clever contemporary details (replacing Ibsen’s dinner party is Whitford’s PBR, La Croix and a Del Taco Fiesta Pack; and to signify each new act, a soundtrack that includes Danny Brown, Kendrick Lamar and more). As always, Hertford does well to rely on his small cast, who offer fiery, impassioned performances: the concerned but loyal Katherine; the stumbling, then solemn Morten; Billing’s quips of comic relief; Hovstad’s big ideas. Dunbar excellently plays with poise the seemingly unflappable and politic Peter. Hertford’s slimy, skittish Aslaksen hits home, making me grimace multiple times with his all-too-real caricature of those who are far less concerned with change than they are with maintaining safe opinions, keeping up appearances and appeasing all sides. Rindlisbach’s explosive Thomas lends complexity and multitudes to an imperfect protagonist who, in other hands, might very well have easily collapsed into heavy-handed trope.

It’s easy to parse out the contemporary relevance of An Enemy of the People, extending far beyond the singular theme of the environment: the fraught, ongoing debates and criticisms regarding the “appropriate” way to enact progress; the public’s seeming silence and compliance in the face of systemic and institutionalized injustice; the perception toward radical activists and whistleblowers (like Harvard University’s recently rescinded fellowship to Chelsea Manning).

Beyond taking on the necessary role of boundary-pushers within Utah’s theater landscape, Riot Act demands that the audience consider their own roles as individuals, as part of a community, even as part of a democracy. Hertford takes that confrontation an impressive step further in An Enemy of the People’s town hall scene: With house lights on, the characters directly address the audience as town hall attendees, pointing mics our way and asking for our opinions. It’s an innovative, literal complement to the literature, putting the spotlight on the audience. As Thomas seethes, asking for our opinions, decrying the majority’s willful ignorance as accomplices to injustice, we’re simultaneously put in a (perhaps uncomfortable) position of having to decide whether or not to participate, vocally, in the play, or to remain silent—proving Thomas right.

An Enemy of the People is on a short, 11-show run, so purchase tickets as soon as you can for this electrifying, contemporary take on Henrik Ibsen. For more information, visit riotacttheatre.com.