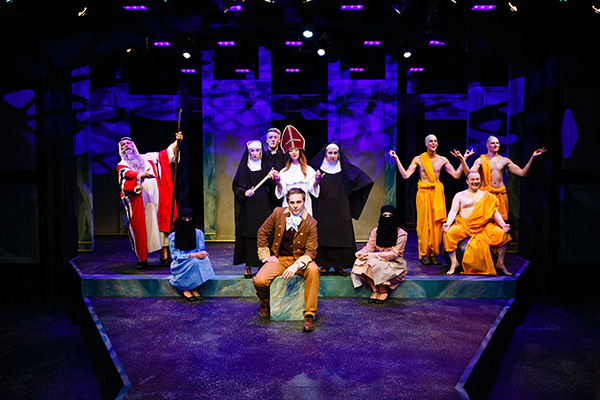 Saturday's Voyeur is a musical opportunity to make fun of Utah's religious legacy.

In the small neighborhood just west of the State Capitol building, a steady stream of patrons walked into the Salt Lake Acting Company‘s building. Women in their mid 50s sat outside and smoked Virginia Slims, while the friendly staff handed out jello shots and tried vehemently to persuade people to become yearly ticket holders. The small auditorium filled up and the four piece band played their rendition of “Tequila” by The Champs while the enthusiastic crowd drank their home-brought wine and sung along with the song by yelling “Tequila!” when necessary.

The first portion of the Saturday’s Voyeur was set in the Visitors Center of Temple Square—opening with the elderly Eula, who had died and was patiently awaiting her husband to call her to join him on his planet in the celestial world. While she waited, she prayed next to the statue of Joseph Smith, which eventually came to life and attempted to woo her. While he did this, the lights dimmed and his “Zombie Brides” took the stage. Reborn due to the Internet and symbolizing the secrets that the Mormon church has painstakingly tried to hide, the Zombie Brides had been given life again. However, Joseph Smith was not too deterred by this, since his church had, “the best PR department in the world.” Eula protested against Smith’s advances and pointed out the contradiction between feeling valued and being a man’s 40-something bride. She called on the Angel Moroni to help set Smith straight, but they changed the rules and downplayed her pleas and concerns.

A short intermission began, and a woman in a ballet skirt, pink wings and slippers (which were fashioned to look like dog’s feet) took the stage. She sang and tried to convince the now slightly-socially-lubricated crowd to become season members. Her number ended and the curtains were drawn back over the entrance door.

The second act focused more on the idea of male priesthood holders and how they make their rules. Moroni entered with a soul patch, which Eula pointed out to be a complete transgression of priesthood rules. Trying to gain ground in the argument, she called out for Brigham Young to set the matter straight—Young decided that beards and penises are the only way one can be a priest. She was then kicked off the stage, for a “Males-only” priesthood meeting was about to begin. Moroni then unfurled a calendar, which featured images of scantily clad women holding guns. They gawked over the images until two missionary ghosts and one 12-year-old porn-addicted Boy Scout came onstage. They began to lecture the prophets and angel about the dangers of porn and the need of certain sacraments. Moroni and Smith protested that they were not looking at the poster for the women but for the guns—and especially since 10 percent of the profits went to the troops. The second act ends with Eula learning the news about the facial hair. “A faith falls apart if the rules which it is founded upon are not upheld,” she says, grabbing and pulling off Moroni’s soul patch, as she runs off the stage.

The second intermission began with two staff members yelling “jello shots” as they walked into the auditorium. People, once about to leave for the intermission, stayed planted in their seats—eagerly awaiting the wiggling alcoholic shots. A young, dark-haired woman stood onstage and spoke closely into the microphone about all the benefits being a member of the theatre has to offer. After all the little paper condiment cups were empty and the speech concluded, the lights dim and the third act begins.

The third act focused on the recent excommunication of Kate Kelly—praying constantly to “Heavenly Mother”—who almost stole the show with her Rebel Wilson–esque style of comedy and acting. Kate Kelly was forced to face a tribunal of men who condemn her as well as a few women who are at her trial. Many times she tried to point out the contradictions of the priesthood and ask the questions pertaining to the necessity of the garments and why men are so afraid of women’s armpits. Meanwhile, Smith was trying to woo a 14-year-old girl by telling her that the lord had given him a sign. He was berated by the Buddha and Moses for his shaky faith and is erratic ego. Eventually, the statue of Jesus located in the visitors center—or, as Mike Brown calls him, “Space Jesus”— broke a deal with Smith, since he wanted to move out of his dad’s house and live on the world. He asked Smith to get his PR people on the job and offered him a deal on the best play ever written, called “The Book of Mormon.” At the end, the church was left in shambles and Kate Kelly finds new strength from “Heavenly Mother” to carry on and keep working for women’s equality.

The play ended just under two hours. The acting from veterans Alexis Baigue and Jenessa Bowen to first-time performers Camille Evans, Anna Harris, Hayden Warzek and Erica Ranee Smith was completely immaculate. Their range of singing as well as onstage chemistry allowed for the story to flow seamlessly. They also created such an aura of enjoyment that it was almost impossible for the crowd not to get emotionally attached to each character—regardless of role or time onstage. The story, however, began to drag on near the end and, since the “Book of Mormon” was interwoven so much near the end, it made it seem like the writers struggled with material—however, the humorous idea of how Mormons would react to such a raunchy portrayal was interesting, but due to the somewhat blasé approach it didn’t fully hit the mark. The overall ideal of battling the priesthood, shedding light on the contradictions when only a small group of people are in power and Kate Kelly’s protest in the church combined well making this year’s Saturday’s Voyeur a worthwhile and very pleasurable story.