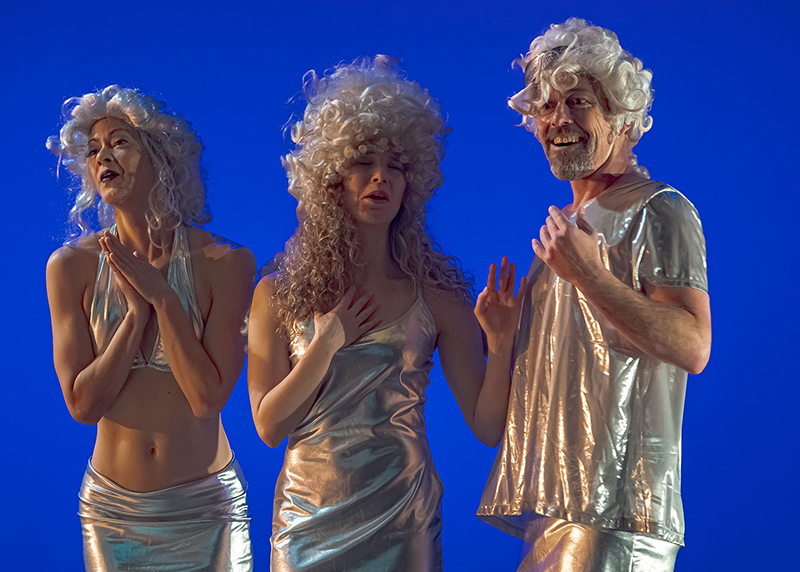 In SB Dance’s production of Sleeping Beauty, the classic happily-ever-after fairytale is updated for the #MeToo era. In the limited, two-show run that took place on June 14 and 15, the audience first sees Aurora (Annie Kent) on a date with a male Maleficent (Nathan Shaw). The date manifests itself in a sexy, winding dance involving two large knives. At the end of the dance, Aurora is pricked by one of the knives and we watch Maleficent snicker and load her withered body into a cardboard box. Some audience members laughed at this choreography, but its resemblance to an act of date rape was disturbing.

Conceived and created by Stephen Brown, Artistic and Executive Director of SB Dance, this performance is witty and fast-paced. “Politics, like art, is about the human condition, so they are always intertwined,” Brown says. “In the Sleeping Beauty, the female protagonist is a sounding board for the male characters, so some folks consider it one of the most misogynistic fairy tales. SB Dance’s princess goes through some of that, but, by curtain, she kicks some ass. No shrinking violet, our Aurora!”

The show is narrated enthusiastically by local singer/actor Ischa Bea, who voices most of the dialogue. She is joined by guitarist Raffi Shahanian, who serves as the minstrel. Together, they make up the electro-pop duo MiNX and have worked with Brown on several other shows. Bea and Shahanian provide steady and consistent beats to the production, moments of comedic relief and—of course—moments of pure talent and charisma.

“Within the hour-long show, the audience sees several iterations of Sleeping Beauty rewritten when the narrator or any of the characters is unhappy with their own (mis)fortune.”

Our narrator introduces us to Prince Phillip (Juan Carlos Claudio), who is a total creep. The prince dashes through the audience handing out flowers and nonconsensual kisses, supposedly putting on the charm. He wears tight metallic pants. He is the epitome of cheeseball in a way that makes absolute sense for this production.

In the following scene, we meet up with Maleficent again, wheeling the box full of Aurora on a dolly and placing it in the assailant’s space with three other boxes, indicative a repeat offense. The Beauties (Christine Hasegawa, John Allen, and Ari Hassett) fill several roles throughout the production, but here serve as assumed fellow victims of Maleficent’s assault as they emerge from their own boxes. Much later, there is another scene in which over 20 boxes are wheeled out on to the stage. It’s hard not to think that each of those boxes could be holding a victim of Maleficent’s abuse.

The Beauties act as our Greek Chorus: Maleficent’s henchmen, fairy godmothers (albeit briefly) and as individuals wanting to claim their own happy ending. Within the hour-long show, the audience sees several iterations of Sleeping Beauty rewritten when the narrator or any of the characters is unhappy with their own (mis)fortune. On one occasion, the Prince demands a rewrite from the narrator in which he lives happily ever after with Aurora. In another retelling, we see The Beauties demand their own set of happy endings where the Prince showers each with his affections. Toward the end of the show, we find Aurora, Prince Phillip and Maleficent in a love triangle when Phillip and Maleficent fall for one another.

“Throughout the production, the choreography is emotional and provocative.”

SB Dance is clearly unafraid of pushing buttons, and is sincere about constant reworking and adding to create what makes sense for their vision. “The story comes together only at the very end when all the elements—choreography, sets, costume, script, lighting, music, entire cast—are in place,” says Brown. “On our budget, that happens five days before we premiere. So I try a few different plots and the artists are incredibly flexible, patient and brave.”

Ultimately, the show ends when Aurora stops our narrator from claiming “The End” and finally has her moment of justice when she incites the murder of Maleficent, Prince Phillip and The Beauties. “Now,” she says, “it’s the end.”

Each scene, even inadvertently so, is focused on bringing the spotlight to awareness of abuse. The retelling of Aurora’s story from a perspective that strays beyond the traditional male-centric view is noteworthy in a cultural and political time in which women’s stories and experiences are being underwritten.

Throughout the production, the choreography is emotional and provocative. At times it’s fun and silly, and at others very serious or somber. This delicate balance is critical to the show’s success, because, for much of this reworking and revision of a classic tale, there must be something contemporary and fresh for the audience to latch on to. We know how this story is supposed to happen, so the company’s job is to subvert the audience’s expectations—which they do exquisitely.