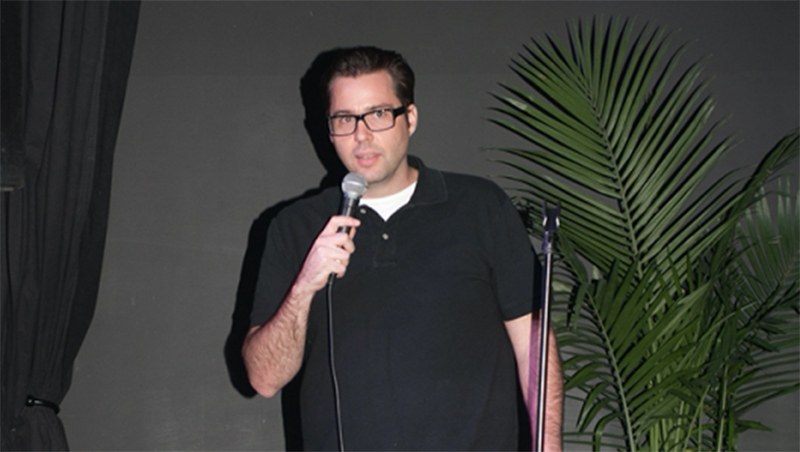 Somebody Else’s Baby: Understanding the Mechanics of Andy Farnsworth

“It’s a thing you develop as a kid for whatever reason, and people compliment you throughout your whole life, but when people start asking you to be funny on demand, it goes away. It just disappears. You get self-conscious about it and don’t understand why,” Andy Farnsworth muses, eating grocery store sushi on a full-moon night. He signals to the window with his chopsticks. “I think the moon affects my ability to make words.” This might be true, considering we had spent a good part of a confusing hour talking about baby overlords.

Andy has been doing stand-up comedy since 2004. He began in Chicago, where he’d commute two and a half hours from Milwaukee to perform at open mics, but stopped abruptly. He says, “I wasn’t prepared for the footlights on the stage. I didn’t realize that would kick in my flight response. I had nothing but premises. It was a mess.” After moving to Salt Lake in 2009 to go to grad school, he picked it back up by performing at the now-relocated Mo’s Bar & Grill on Sunday nights. “I miss that place, man. I hated it at first, but now I’m really nostalgic for it,” Andy says pensively. “If you were at Mo’s, you were probably there to get better.”
Since his move to SLC, Andy has cemented himself as a glory boy on the comedy scene, earning respect and admiration from local veterans, and white-knuckled, voodoo-doll-kit-buying resentment from comics who just aren’t that good. His jokes are painfully autobiographical, always posing a direct challenge to what topics human beings consider normal to mention in public. Few subjects are taboo for Andy, and his brutal honesty about himself, coupled with his undisputable intelligence, results in a feeling that is close to enlightenment. You want to hear more. You don’t want him to leave the stage. You want the awkwardness of watching someone divulge their deepest secrets to NEVER GO AWAY.
In addition to being a stand-up comic, Andy is a writer and he teaches writing up at the U of U—composition/rhetoric and creative writing (a term he hates). When asked how teaching in front of students is different than performing in front of an audience, he sighs and says, “It’s not even remotely the same. It’s so weird! I’m figuring this out because I know they’re not the same, but when there’s silence [in the classroom] for a long period of time, I start throwing myself under the bus and say things the students shouldn’t really know about. … My job as a stand-up is to be as honest as I can, but I don’t necessarily feel that same freedom up there in front of students.”
Andy spent the summer of 2012 in L.A., performing at local clubs and contemplating what just about every comic wonders about in the middle of the night: DO I MOVE OUT HERE OR NOT?! He decided to head back to Salt Lake to finish school, but didn’t leave empty-handed. “One of the things I got to do in L.A. was go to this place called Rafa’s Lounge Art Gallery and do stand-up for what was called a ‘set list’ show. There were five or six comics there, and you went up, and you had these premises onstage. You were supposed to get up there and think in front of people, and that was really a spiritual experience for me. It just relieved the pressure for me … You’re going up with nothing. I found that very freeing.” Andy wanted to do a show here in SLC that granted comics the same opportunity. Since the idea is actually somebody else’s baby, he named the show just that: Somebody Else’s Baby—modeled after a setlist format tradition carried on by comics Troy Conrad and Paul Provenza.
“Each time, we feature a picture of a new baby on the screen. Sometimes I steal the pictures from the photography studio on South Temple, the giant babies with the hoods. I always like to picture this [show’s] future with a baby leader,” says Farnsworth. “So there’s kind of a magic to this show, like this baby is overseeing our show, I think. It’s just the beginning now, but I’d like to see it grow up and be somebody else’s teenager.”
The monthly show is wildly popular with the local comics. Andy thinks it’s probably because the improvisational spontaneity of the show not only allows stand-ups the freedom to go up onstage unarmed and challenge themselves, but also breaks up the mind-numbing monotony that open mic shows are notorious for. You can check out Somebody Else’s Baby at The Complex usually on Tuesdays every month. The next one is on Friday, Nov. 8 for $5 in advance and $8 at the door.  While you’re at it, be sure to check out his website (andyfarnsworth.net) and maybe check out his Twitter account (@andy_farnsworth) because that would be good. Also peep the Somebody Else’s Baby site (somebodyelsesbaby.com). Hell, check out Andy’s underwear drawer, filled with Baby Overlord by Hanes® in all colors! The idea here is to check this guy out because you’d be a goddamn lunatic not to.
Photos: