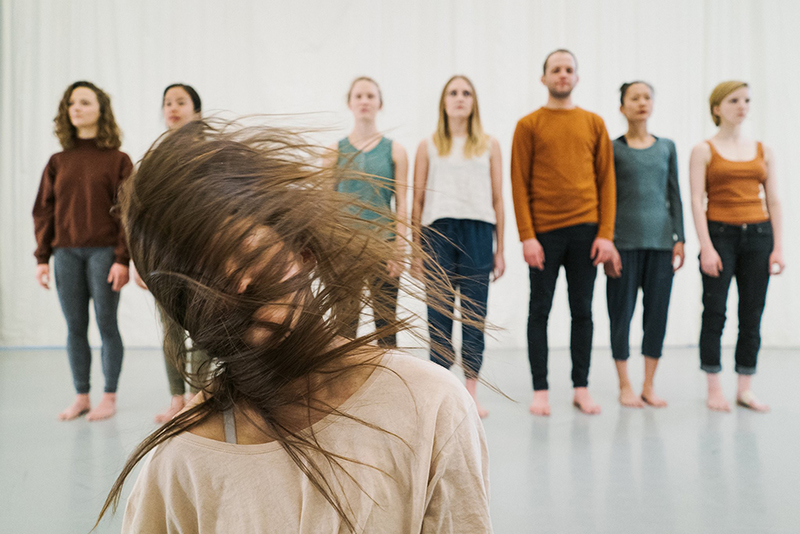 This Friday and Saturday, April 28 and 29, three emerging choreographers will premiere Suite Space at the Sugar Space Arts Warehouse. Made possible by the Sugar Space Foundation Artist in Residency Program, Suite Space is presented by Salt Lake City–based choreographers Brooklyn Draper, Samijo Kougioulis Meier and Nichele Van Portfleet. Draper’s The Great Pretenders incorporates both structure and improvisation to explore how we react when we know we are being watched; Kougioulis’ And They Didn’t Even Know intersperses a sense of transparency and autobiography into the choreography; and Van Portfleet’s piece considers the obstacles we encounter from both internal and external forces.

Suite Space premieres on Friday, April 28, at 7:30 p.m., followed by two performances on Saturday, April 29, at 2 p.m. and 7:30 p.m. Before the evening performances, local musician Casey Van Portfleet will play with live digital composition for the audience, starting at 7 p.m. For the matinee performance, the Salt Lake City–based Will Baxter Band will perform their signature mix of jazz, blues and soul, starting at 1:30 p.m. Tickets are $10 online or $12 at the door. For more information, visit thesugarspace.com.

SLUG: To start, could you please introduce yourself and who you are—both as a dancer and choreographer, and also as an artist-in-residence with the Sugar Space Foundation?

Brooklyn Draper: My name is Brooklyn Draper and I am originally from a small town, Burley, in Idaho. I began dancing at the age of three and haven’t taken time away from it since. My parents would drive and fly me to classes and intensives in order for me to get different perspectives and a broader training. It wasn’t until I was doing my BA that I started growing a passion towards modern dance. After completing my degree, I moved to London to further my education and earned a postgraduate degree from Trinity Laban Conservatoire of Music & Dance. It was in London where my interest towards choreography really began to blossom. After leaving London, I moved to Salt Lake City where I have danced with various companies, done project-based work, and continued to choreograph locally and in other states.  I have been lucky enough to perform in the U.K., China and in throughout the U.S. Last year, I received my Laban Movement Analysis Certification and began the MFA program at the University of Utah in the Fall.

Samijo Kougioulis Meier: Samijo Kougioulis is a native of Salt Lake City, Utah. She has trained, performed, choreographed and taught all over the valley. Samijo graduated Magna Cum Laude from Southern Utah University with her BS in Dance Performance (2013). During her undergrad, she was asked to be the first SUU student to participate in a study abroad in the Dance Academy at Fontys University for the Arts in Tilburg, Netherlands for six months (2011). There, she studied under many European professors and grew tremendously as a dancer and a creative. Upon arriving home, Samijo was offered an apprenticeship with Odyssey Dance Theatre for the 2011 season of Thriller. In her earlier years, Samijo received numerous scholarships for different dance styles (tap, jazz and hip-hop) at NUVO, Joe Tremaine, NYCDA and JUMP conventions. Samijo taught two years of Health and Dance at Hillcrest Junior High School in her hometown of Murray, Utah (2014–16). Currently, Samijo is a candidate for the MFA program at the University of Utah in Modern Dance (2016–19).

Nichele Van Portfleet: I grew up in Sonoma County in the SF Bay Area. I mostly did gymnastics and rhythmic gymnastics growing up until I decided to commit to dancing when I was 13. I was doing ballet then and didn’t know much about modern dance until I went to college. I started at UC Irvine studying ballet but was very excited by the modern classes that we were taking. I left Irvine due to injuries and a loss in direction, and luckily ended up finishing my degree at Sonoma State University, where I met Kristen Daley, Nancy Lyons and Christine Cali, all of whom had an important impact on my growth as a dancer and choreographer. I worked in San Francisco as a dance artist for a few years before deciding to head back to school. I missed the academics and having the artistic input that comes with a rigorous degree program. Before coming to Utah, though, I had found a drive to create and produce work that I had no intention of turning off. I approached my classmates to see if anyone would be interested in presenting work in the community, and that’s when Brooklyn was able to help us get connected with Sugar Space.

Draper: Nichele approached both Samijo and me to see if we would like to do a show together, and that is when I suggested Sugar Space. I have worked with Brittany Reese, Founder and Director of Sugar Space Arts Warehouse, on projects in the past, and have really loved working with her and the space. She does a lot of great work for the community and she has been really easy and fun to work with. If anyone is looking for a space to show work, I highly recommend checking out Sugar Space.

Kougioulis: Our residency took the form of a kind of hybrid residency/co-production. Although our rehearsals were held off-site (for our own convenience!), we are grateful to Sugar Space for offering the space to us for tech rehearsals and performances, as well as help with marketing and the box office. Most of my personal experience with the residency will be condensed into this coming week for the show.

Draper: The Will Baxter Band, a local Salt Lake City band that plays a mix of blues and soul, will be playing a set before the Saturday matinee show, starting at 1:30 p.m. They are a great band who is always supporting the local dance community and we are lucky to have them opening for our show. Samijo and I will also be collaborating with them on a rooftop concert this August that we are really looking forward to.

Kougioulis: Casey Van Portfleet will be playing Friday and Saturday evenings before the show. Although his training is in jazz percussion, these days he enjoys making electronic sounds and will be playing with live digital composition for the arriving audience. Casey created the sound score for my piece on the program as well. This is the fourth collaboration together.

SLUG: What piece you will be presenting? What was the inception for this concept and its themes?

Draper: I didn’t really have a concrete idea or plan going into the making of this piece. I knew I wanted to play around with some ideas of how we react when we know we are being watched. Do we shy away from it or does the ego start to inflate? The dancers and I played around with these ideas with some highly structured improvisational scores, and then the concept of the piece began to have more of a trajectory. There are moments of set material and also moments of improvisation throughout the piece, which give it an exciting thrill of chance for me. You never know what you will get as an audience member, and every time it is performed, it will be different.

Kougioulis: And They Didn’t Even Know explores the damage that can be caused to the mind and soul by the subjugation of one person by another, considering how our interactions during a crucial time period of growth have the power to steer us towards the acceptance (or destruction) of self. I am interested in incorporating my autobiography into my choreographic work as a means of transforming some slightly negative realities into an accepting and positive reality. I am interested in the healing aspect that art can have on our lives as creators and also for my dancers. They have been very open regarding their own lives throughout the process, which has added heightened significance to the content of my work.

Van Portfleet: I have been curious about obstacles lately, from those between communities to the way that we become our own personal obstacles. Although I had intended to create a piece for a larger ensemble about competition, getting in each other’s way, and the way that we isolate the “other,” when I ended up with a cast of just three women, I decided to let the original concept go and to start fresh with the dancers in the room, all of whom were new collaborators for me. I began to work from imagery that in my mind was far from the original impetus, but somehow the idea of personal obstacles and isolation wove its way back in. There isn’t a story or a narrative, but there are definitely images and ideas embedded within it that are driven by a subconscious engine.