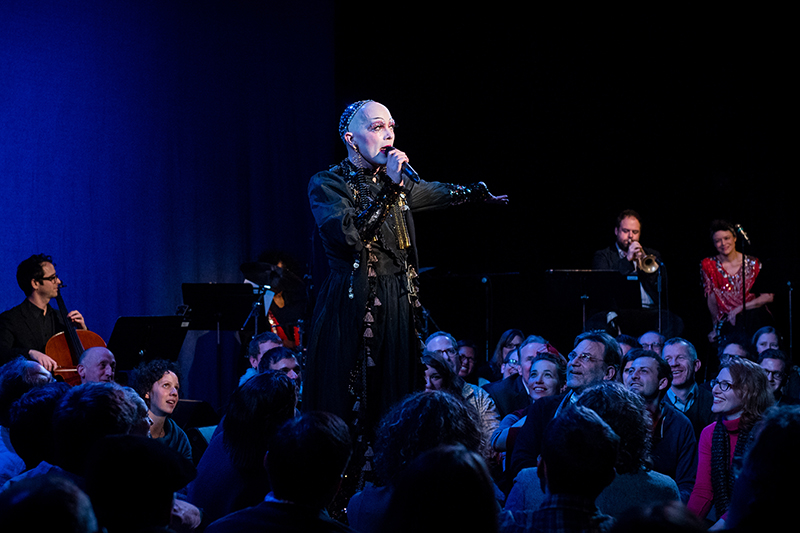 On Jan. 14, the exceptional talent of Taylor Mac makes its debut in Salt Lake City at Kingsbury Hall. One of the greatest theater artists of our time, Mac (who uses “judy” as a gender pronoun) is known for judy’s talented performance pieces and playwriting. Judy is the author of 17 full-length plays, including Hir—one of my favorite contemporary pieces to date. Most recently, Mac has been working on a five-year project: A 24-Decade History of Popular Music, and performed the full 24 hours in New York City. As Mac says of the 24-hour show, it “felt remarkable to work on something for five years, something that is not possible, obviously, but very ill-advised. And to pull it off and be a kind of shining light in an otherwise destructive kind of time, a fear-based time—and to create a piece of art that was so maximalist, so huge, so full of many things and yet so intimate and not about fear—it was healing in a lot of ways. It’s thrilling.”

For Mac, performing the 24-hour piece was revealing and surprising, allowing judy to discover unexpected limitations regarding judy’s performance art. “I knew going in that my mood and abilities would change and surprise me,” says Mac. “However, things that I thought I wouldn’t have energy for, I had energy for. Things I thought I’d do 100 percent or I’ve done many times without any kind of mistake or misstep, suddenly I had to focus and figure out what I was doing.” Mac’s 24-Decade performance spans over eight acts, and it is those acts that have been and continue to tour around the globe. For Salt Lake City, Mac will be performing a three-hour concert from the 24-Decade, covering music from 1946 to 1976 and focusing on the Civil Rights Movement and Stonewall. “I know that Salt Lake has a particular culture on the surface that’s different from my culture,” says Mac, “but when you dig in a little bit, my guess is that when people are excommunicated from their religion and their home for being queers, they find each other. So, as a result, Salt Lake has a rather large queer community.” Mac’s performances tend to be about community, deconstructing compartmentalization and queer life—something that Salt Lake often confronts but sometimes wants to forget. “We always present our community on the stage, but everyone’s invited,” says Mac. “We don’t exclude anybody, but we’re also not trying to come into a town and say we don’t exist or placate a certain community in order to get them to ‘like’ us.” Overall, however, Mac doesn’t see judy’s self as a teacher, but rather, a reminder to the audience of what they might have forgotten, dismissed, buried, or had other people bury for them. “And hopefully, people feel more connected by the end,” says Mac. “That’s always something that we’re trying to do, is bring people together in a way, give them a shared experience—which doesn’t have to be a homogenous one.”

Mac has always been famous for judy’s way of participating with the audience, and that has happened in each performance. What’s interesting about the 24-Decade project is that Mac and judy’s troupe used very little rehearsal time, tending to actually rehearse once there was an audience before them. “We’d get together with the band and spend about three hours for every three hours of music rehearsing,” says Mac. “Then we put it in front of people. The main rehearsal becomes the performance. I would work that way as a solo artist, but it was different to work that way as an ensemble. The great joy of that was that over five years, we were making it with an audience as opposed to feeling like we were hiding it and then presenting what we were making.” Daring to fail a little bit in order to succeed, Mac’s interesting approach to rehearsals has paid off in the long run, adding organic intimacy to each performance. The group also tends to use the audience a lot in their performances, and audience participation has been a longtime favorite of Mac’s shows. “I know people get freaked out by the phrase ‘audience participation,’” says Mac. “What I would say is it’s not the usual audience participation. We’re not trying to force fun on anyone. I’d never try to force anything on anybody. That’s the art that’s in the room—that someone might be too shy or too afraid in the moment—and I want that in the room. It’s the notion of expressing all of who we are, opposed to expressing one thing.” As far as the audience participation in Salt Lake City, Mac says, “You’ll see!”