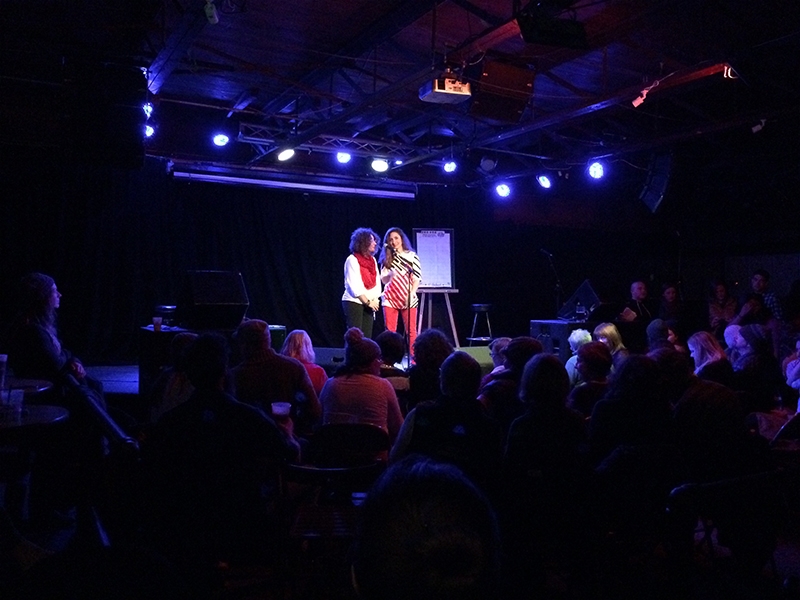 "Sternfeld and Serena took the stage and introduced themselves and The Bee. The theme of the night was tradition." Photo: Kathy Zhou

The good storyteller is a performer: She tells a tale of true, ordinary life as a work of theater, meant explicitly to be presented and felt live. She is a wordsmith: She improvises and embellishes, toying with words, lingering on details, affecting the listeners’ own empathies and experiences. She is a human being: She lives through something extraordinary—or extra ordinary—and yearns to share it. The good storyteller is, all at once, a raconteur, a luminary and a craftsman. Francesca Sternfeld first discovered the very human power of storytelling on the radio, through New York City’s The Moth. Sternfeld, who currently works as a social worker in New York, fell in love with The Moth’s particular format of storytelling. A theme is given and 10 storytellers are chosen randomly out of a hat. Each storyteller has five minutes to tell her story and is then judged based on select criteria by teams of judges. Sternfeld, along with her sister, Giuliana Serena, decided to bring The Moth’s illustrious iteration of performance storytelling to Utah.

On Dec. 18, The Bee debuted at Urban Lounge to an audience of over 200. The venue was pleasantly crowded and the audience was chatty and enthusiastic. A long line for beers formed as the lone bartender poured Blue Moons and Polygamy Porters, and those who were just arriving had to find spots to stand—the chairs and booths filled up as soon as doors opened. Volunteers handed out slips for audience members to anonymously fill out: What is something you’ve inherited, for better or for worse? What is a tradition you wish you could take part in? What is a tradition that you hate? Storytellers’ names were put into a hat. Far more names went in than the 10 that would be selected. Sternfeld and Serena took the stage and introduced themselves and The Bee. The theme of the night was tradition.

While it was clear that most of the storytellers were at the event to share something and not to win, the competition added a friendly oomph! to the storytelling. Three groups of three judges (The Betty Crockpots, The Black Fridays and Tradition…tradition!) were introduced. Judges included Greta DeJong, Editor and founder of Catalyst Magazine, Michael McLane of the Utah Humanities Book Festival, and Derek Clements, producer of The Porch. Storytellers were judged by four criteria: how well their story matched the theme, whether they were able to complete their stories within the time restraint (at five minutes, a timekeeper played a few recorder notes, and at six minutes, the timekeeper blew into a harmonica, signaling “Stop!”), whether their story had an arc (beginning, middle and end), and whether or not there was a sense of transformation to the story.

The storytellers were excellently diverse. Performers were young and old, and included a stand-up comedian, a writer/professional speaker, a professor, a Mormon, a rollerblader and a fortune-teller. There was a hodge-podge of topics—sex, death, family, magic, love and drugs. Each of the stories was nothing short of a delight, though. After all, there’s something remarkable about one person, onstage, sharing a true part of their lives and laughing, smirking or crying while doing it.

The first storyteller whose name was drawn from the hat was a stand-up comedian, and he talked about the tradition of disaffected privileged youth: going abroad and teaching English. His was a tale of going to Prague, getting high with his students (apparently, European teenagers absolutely worship American culture), and then getting a bloody nose to end all bloody noses. “Shame,” he concluded, well after the timekeeper blew “Stop!” on her harmonica. “Probably the greatest American tradition of all.”

After each story, the storyteller drew the next name out of the hat as judges deliberated on scores. During the brief breaks, Sternfeld and Serena would come onstage to emcee, reading from select slips of the prompts that audience members had answered earlier: something you’ve inherited, for better or for worse (“my dad’s deceased girlfriend’s ashes,” “neuroses,” “sisters, sisters, sisters”); a tradition you wish you could be a part of (“Christmas,” “Hanukkah,” “polygamy,” “drug dealing”), a tradition you hate (“the ploy of mistletoe,” “smiling at strangers,” “people who don’t know the difference between a ritual and a tradition. I hate them.”)

Stories abounded. An older gentleman spoke gently of his three birthdays: his real birthday, the day he received his new heart and the birthday he ascribed to his heart’s donor—the winter solstice, to signal new beginnings and longer days. One woman illustrated the nuttiness of having your sexual awakening at the age of 30. Another talked about taking Adderall with her then-husband before participating on The Newlywed Game. Her current boyfriend, a writer and wordsmith, happened to be the next storyteller. He spoke confidently and eloquently, but immediately choked up—he was literally at a loss for words—as he shared the moment he finally broke from tradition: seeing her, with sunlight falling from the window onto her face as she bit her lip and smiled to him.

Then there were the stories about family and loss. One storyteller grew up in a South African Muslim community and talked about the magic of jinn. His mother continually prayed to the jinn on each of her shoulders until she passed away, at peace, from cancer. Another storyteller, this time from Canada, didn’t realize until years later that her father managed to instill a rather serious phobia of squirrels within her. She’s convinced, though, that since his death, her father was reincarnated into a squirrel. At least now, though, whenever a squirrel launches an acorn at her, she can look at it and say, “Hey, what’s up, Dad?”

Funnily enough, the winner of the event was the final performer, who turned out to be Steve Sternfeld, linguistics professor at the University of Utah and father of Serena and Sternfeld. His was a tale of Passover Seder with Bernie, his impatient father who desperately wanted to eat, and Blanche, a controlling but well-intended mother.

The night ended the way it began: with cheers and with gratitude. Friends and family went to congratulate the storytellers and the cofounders. Audience members signed up eagerly to hear news and future events from The Bee.

“We’re thrilled with the event,” said Serena afterwards. “We had amazing storytellers who told beautiful stories from the heart. We’re impressed that people were willing to be brave and tell stories and create this community atmosphere.”

Sternfeld will return to New York soon, but Serena—a ceremonialist, a rites-of-passage facilitator and a menstrual cycle educator—will continue The Bee. “We do hope to make this a tradition in Salt Lake,” said Serena. “We know that people love stories. They love telling stories—they love listening to stories. After tonight, we know that Salt Lake is ready. We’re excited to see what becomes of The Bee.”

The night was enchanting and entertaining, but more than anything, it was affirming. The 10 storytellers took the audience into a part of their lives. We felt what they felt—joy, shame, love, skepticism, anticipation—and we followed them, from beginning to end, with stories told in an unswervingly open and vulnerable way, affirming each of our own many and varied experiences.

For more information and future events from The Bee, sign up for the email newsletter on The Bee’s website.