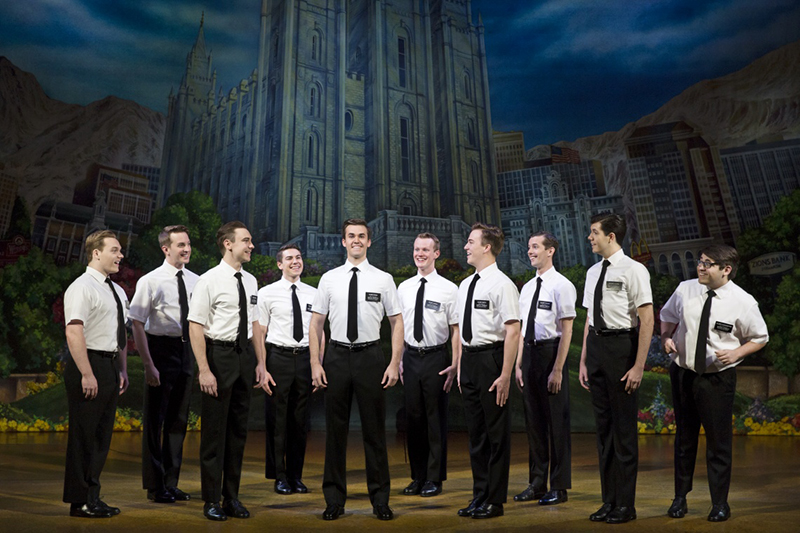 Photo courtesy of The Eccles Theater.

On the second to last day of its nearly two-week run in Utah, nine-time Tony award winner The Book Of Mormon graced the stage of the shimmering diamond of the downtown show circuit: The Eccles Theater. Now a nearly necessary experience for locals, the massively lauded Broadway production by the creators of South Park has come back home a few times since 2015. By now, Utah audiences are probably all too aware of the show’s abundant cultural references, both overt and subtle. This bold and downright weird story of two mismatched missionary companions thrown into an African village attacks every sociocultural angle in exactly the fashion Matt Stone and Trey Parker are known for.

Beneath a glittering electronic sky that sets the mood for the Eccles stage, an equally impressive glowing archway with the gilded, horn-tooting angel Moroni framing the show. Even the set dressings of the production are imbedded with clever and cutting gags; from the celestial scenery above Moroni to the dead animal carcasses in the village.The cast is a blend of white and black performers exercising their chops to address the explicit racial aspects of the story. The actors portraying the heinously milquetoast elder squad were charmingly naive and flamboyant. Protagonists Elder Price and Elder Cunnningham are absolute counterpoint delights as a delusional and heroic hot boy and his lurpy, vaguely inappropriate yet imaginative mission brother.

The Book of Mormon musical might just contain the most irrelevant lyrics ever to land on Broadway (an observation made entirely from semi-informed opinion rather than empiricism). Seemingly nothing is verboten in this show; from female genital mutilation to blind white privilege to every sexual innuendo imaginable. The show will assuredly make just about any viewer snort-laugh with its bold maneuvers, including a chorus line of spangled, closeted elders in full jazz hands and a Ugandan tribe interpreting the story of Joseph Smith with massive and erect sex accoutrements.

The music of The Book of Mormon has reached canonical status at this point, made evident by new Broadway classics “Turn it Off” and “I Am Africa,” two hilarious and hyperbolic sentiments on denial, repression and white colonization. The classic Broadway “boy meets girl” romantic duet about an impending baptism quickly becomes a thinly veiled metaphor for awkward virginal intercourse and its inevitable and sudden moisture issues. The way the musical handles racism, class, theism and sex is cutting and clever, challenging the audience to as many uncomfortable throes of laughter as is humanly feasible in a two-and-a-half-hour runtime.

Per the usual Stone & Parker brand, The Book of Mormon is crass, fearless, utterly lacking in political correctness and ultimately full of heart. The show ends with a courageous and insightful message about letting loose the rigid containers of orthodoxy and seeing the humanity and hopefulness that a creative and individual spiritual identity can provide. The moral of this mostly Mormon-mocking musical is one of acceptance and love, a message that is inclusive of imperfections and differences. As usual, Stone & Parker deliver that message beneath steaming piles of hilarity. The next time The Book Of Mormon comes through town, it will be a can’t-miss cultural touchstone for locals with a mind properly open and a heart a bit so as well.