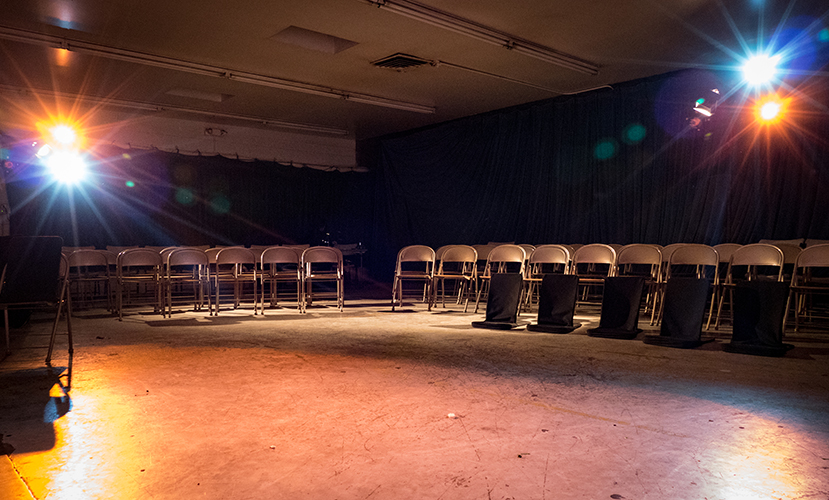 Salt Lake’s third annual Fringe Festival comprised eight days, more than 40 shows and 200 performances. The Fringe Festival is held in several states across the nation and internationally as well. It works as a platform for any performance artist to share work with no requirements and no censoring. I had the chance to see Rakan’s debut performance of Phantom Map, Katelyn Killian’s Great Salt Lake Moves and Dan Higgins’ “(_______)”.

Rakan, a group that had yet to perform, introduced themselves at the Fringe Festival with Phantom Map, a combination of original script and Butoh. Held in a dark room at The Fringe Factory, Rakan describes this performance as “a journey from dark to light told through theatre and the Japanese dance form Butoh.” Phantom Map clearly reveals itself as a tale of life and the in-betweens, using a Buddhist perspective for narrative structure infused with a Japanese dance form. They also included their own fictional scripting that allowed for literal interpretation. The script centers parts of the narrative on a riverboat in another time and place, in a home that is perhaps more contemporary, and in the fully abstract sections which took on Butoh to display The Bardos, the place after death and before life.

Black shields across each of the performer’s eyes; hooded, draping cloaks of bright red, and black gloves with finger extensions bring the audience to a mystical place. The costuming provides a few cues, distracting the eye from automatically identifying the performers as human. Their movement seems to be an eerie form of worshipping or greeting toward the still performer in white with a metallic mask. Slithering across a grid pattern, or map, a still dancer in white remains stable. Their presence within this stance gradually becomes distorted. Slight movements of the head accent the sinister facial expression of the mask. The dance revisits this place later with even more of a sense of a void and mystery in the air. I interpret this place as The Bardos.

Lights off mark the end of each scene and the beginning of another. The second scene incorporates text and attaches a literal meaning to work out the puzzle of what happened before. Breaking the fourth wall, the performers take the audience onto a riverboat. A woman referred to as “master” raises her limbs as she speaks, as if to suggest that moving the body and speaking are symbiotic acts. A poet tells parts of his story to this “master,” which reveal that his character is potentially dangerous. Anxious, another begs her, falling to his knees for her to tell him what she knows about time. She speaks with a strong demeanor that refuses to break—which, in this case, would be to share all of the knowledge that she holds. Her character in this scene becomes particular and tenacious. Through the contrasting character’s development and her commitment to the role, she embodies the knowledge that she may know in Phantom Map’s world with the understanding that she can’t control it.

The piece switches between life as we know it and The Bardos. It carries details of each that support the narrative and promote comprehension of the entirety of the piece. The one in the mask remains a mystery, as well as an anchor across the travels of the piece. The piece ultimately presents moments in life and death and an experience in-between with movement that results from the dreamlike environment. The movement of the performance becomes a tool to investigate the concepts of the narrative. The tale proves to be successful in clarity—however, as

the characters succumbed to battle, loss and desire in Phantom Map, my emotions did not follow.

Killian, solo creator and performer of Great Salt Lake Moves, describes the work as a “movement piece that combines art and science to greater understand and explore the beauty and phenomenon associated with The Great Salt Lake and the salt it produces.” Recorded sounds of rain used in the work suggest that it is an attempt to replicate one of the environments in Utah. After introducing herself as the performer with a simple but impenetrable stance as the lights come up, she begins an interesting process that soon becomes tedious. There are a few bottles of salt lined up across the wide dimensions of the Dumke black box, and the floor is dusty. With no detectable intention, Killian turns over the first bottle and allows the salt to pour onto the ground. Each bottle is the same size with the exact same kind of opening, so the visual suggests how the salt lands can quickly become palpable for the audience. As she continues to apply more salt to the ground, the larger pattern she is creating across the floor also becomes predictable, yet we watch. This process of Killian’s remains somewhat ritualistic and bound.

As the piece progresses, it becomes clear that the application of salt is complete, and Killian begins to explore the texture of the boxes and lines of salt with her heels and her toes. I begin to see that each box she “drew” onto the marley represents a different movement by which she explores salt and dance. She starts with sliding her feet into the lines, blurring them a bit and moves through the pelvis and torso, limbs and then her whole body replicating the images of the lines in the boxes.

The climax of the piece doesn’t include any hint of play with losses of grip, nor tactile experimentation with the salt consciously poured across the floor. The choreography suddenly jolts forward through the blurred lines of salt with jumps, turns and leaps. This arbitrary technical dance movement reduces the amount of play, which turns the salt into more of a set rather than a medium used in the movement exploration. The salt becomes an experience that is already discovered rather than an active process of discovering. This is clear—however, it is an unfit and drastic change. Once the piece is complete, Killian invites the audience to take a chance to play in the salt themselves. The performance is a casual venture into movement with an earthy medium.

Higgins’ new work is a development of fictional, eerily abstracted storytelling crafted alongside rigorous attention to the cadence of movement and silence. As a nonlinear narrative following dark forces, this piece contains omniscient suspense generated by beaming, drone-like noise that continuously fuels drifting bodies through the space. While Higgins is somewhat frozen in his mysterious character at a table, the dancers soon become defined as extensions of the focus on the table. The group seems to be walking, running and getting from point to point with no external mention or acknowledgment of each other. Gradually, a chase filled with quick advances toward one another and a motif, a performer’s crippled hand raising toward the sky, arrives between movers. There is also no acknowledgment from any of the performers of the audience, which definitely guides the work into a more separate place filled with wonder.

A tense environment arises the second the audience walks in and sees Higgins at a table. I naturally reacted to it by trying to assemble the rest of the picture in my head. Higgins, the storyteller, consistently leaves us with clues, hints and ambiguous evidence of a painful event of some kind in the center of it all. Higgins loudly and clearly says the mysterious lines about wolves and being eaten, but any exact decipherability becomes impossible. Pieces of information that could be held onto to fully assimilate a fixed narrative consistently slip away. The images of the drifting and chasing bodies in the space leave for the next moment, providing more questions.

The table that resides in the center of the black box has a scarf on it resembling a tablecloth. It’s whipped, held, thrown and placed on bodies and on the ground at various moments, highlighted during duets. I am left questioning the motive of those that take the scarf or what the scarf might symbolize. It flows to and away from the table and throughout contrasting partnerships. Two men arrive into the space together, and a chase with specific points of pause transforms into touches and subsequent collapses. The scarf is thrown into the middle of it all, ending up laid out on the ground. Another duet occurs, and the scarf covers the face of a dancing body, gets thrown out of the space and retrieved. What does it represent and why does it cover and dance side by side but also gets thrown out? While the choreography comes and goes beyond the setting of the table, Higgins rattles it and pushes the suspense. He alters the volume of the story, and his strange body language heightens the feeling that something is going to happen and that it is dark, absurd and unthinkable. The piece works successfully with physical force and uncertainty, which is definitely understandable and engaging. However, I never quite caught onto understanding the interest in the scarf or its intention.

Each year, the number of artists in Salt Lake’s Fringe Festival increases. Growing since 2015, the two weeks in Sugar House were filled to the brim with performances from local dancers, actors, poets and more. I saw ventures into unknowns, play and obscurity.