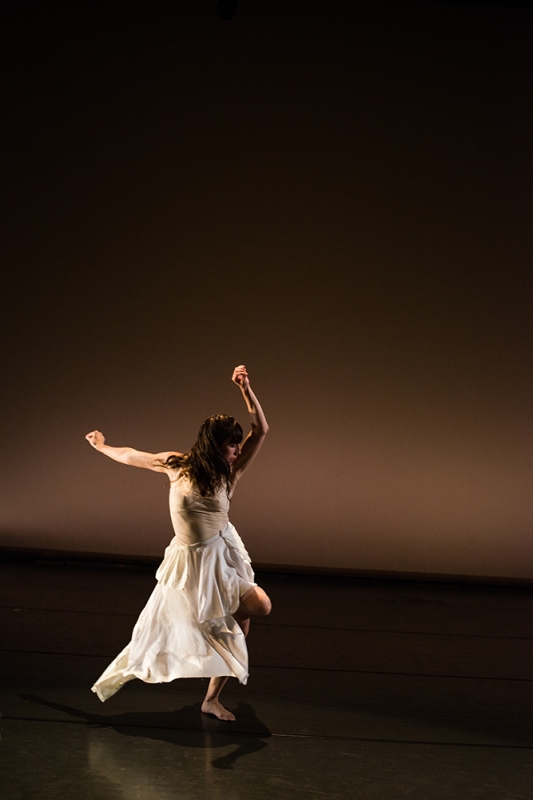 The premiere of Natosha Washington’s new dance collective begins with a plea from the self-styled Penguin Lady herself. In the dark, a pre-recorded address to the audience opens the evening. Washington asks us to invest in what we are about to see on a personal level, beyond the formal elements of choreography in which people are often interchangeable parts.

Washington’s voice continues as the curtains open. There she is, standing still, facing away from us. The text becomes more personal. We learn that she was born in Georgia, and renamed Natosha by her father, after the high-heeled Soviet spy from Rocky and Bullwinkle. She elaborates on being a “black woman with a Russian name in Utah”—detailing a surreal trip to the DMV where she was asked to choose from a list of racial self-identifications that included “Negro” while being served by a woman who thought her name must be “Latosha” or “Lanosha.” She also speaks of professional “disappointments,” stemming from the further Othering that comes from not fitting the balletic body shape still normative even in Modern Dance in Utah. With a dry sense of humor, the text ends on a self-affirming note. Whatever happens, “I am black and I am beautiful.” (This statement segues into the rest of the score, a sound-poem crafted by Tracie Morris for the 2002 Whitney Biennial.)
In movement that echos the wit, rhythm and word play in her and Morris’ texts, Washington’s selfhood is expressed through gesture. At times, her gestures are oblique, even absurd, a personal language that draws one in. (I’m reminded of the fake foreign tongues uttered in an earlier Washington work, Babble.) In other moments, such as when she briefly cups the heft of her own breast, the meaning is less ambiguous—she’s reclaiming herself. It’s a great pleasure as someone who has followed her work for years to see the steps coming from their ultimate source—she is one of those choreographers who dances her own work in a way no one else quite manages. I sincerely hope we will see more of the Penguin Lady dancing herself.
What follows is a mixed bag of short pieces. Some, like the opener, are statements about identity. A smattering of such include a love duet between Tyler Kunz and Nathan Shaw and a neurotic solo by Corrine Penka. Both are promising studies, which perhaps we’ll see fleshed out in future evenings. Two more solos feature women standing still, facing us in a spotlight as their disembodied voices speak about pregnancy (Rosy Goodman) and aging (Jennifer Beaumont). In particular, Beaumont’s is surprisingly affecting, in spite of its simplicity. Then there’s the inclusion of the group’s Kickstarter video, and another static solo performed by a wooden penguin statue painted to look like the group’s logo. These are unfortunate choices that cause the evening to lag and feel a bit like someone else’s family reunion.
Unrelated to the theme, but worthwhile in their own right, is a new sextet piece performed to the recorded sound of heartbeats and two reconstructions. The older work was made before Washington’s first professional venture, RawMoves. These works flaunt casts who visibly relish the chance to move together. What’s also clear in a work like Exit from Eden is how they draw strength from a diversity of backgrounds and approaches to movement practice.
Washington has revisited House of Timothy several times locally and nationally since it was made in 2004. Here it is performed by Monica Campbell for the first time, and by Nathan Shaw, who has played the male role every time I’ve seen the work. I have always found this duet, which portrays a violent, futile heterosexual relationship, to be a chilling yet necessary antidote to (Post)modern Dance’s preponderance of this issue, which largely includes yet fails to explore the meaning and context of violent physical struggles between men and women. The dancers excel as usual— creating a portrait of abuse in which both parties seem dimly aware, but unable to escape their situation. Shocking this Thursday however, was the reaction of the audience to this iteration. They seem to think that the work is a gag. Although there is certainly a sense of mutual complicity in the situation, there’s nothing playful or fair about the fight— and there’s certainly nothing funny about seeing Shaw drop Campbell over and over again.
Photos: