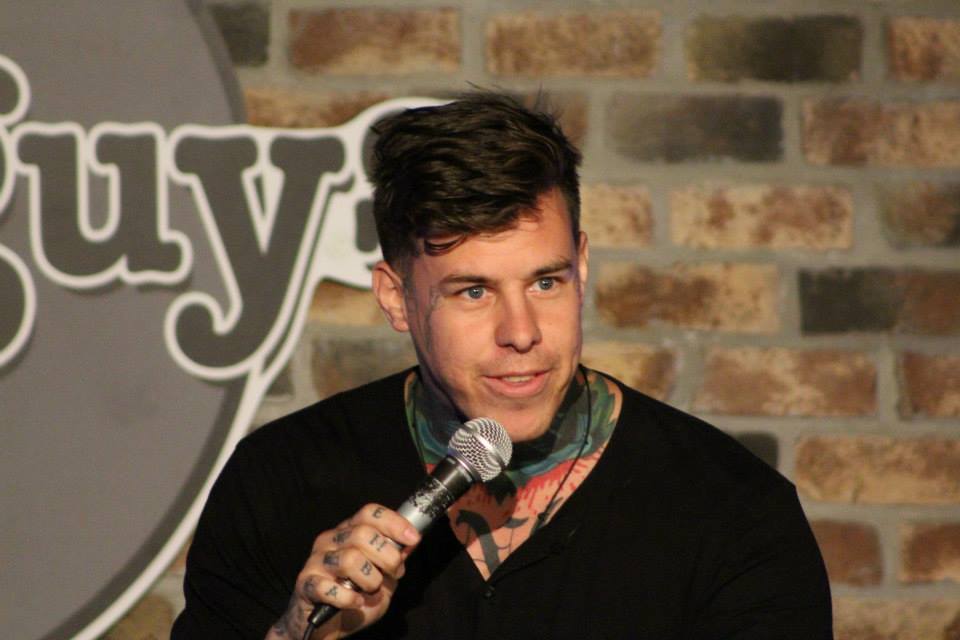 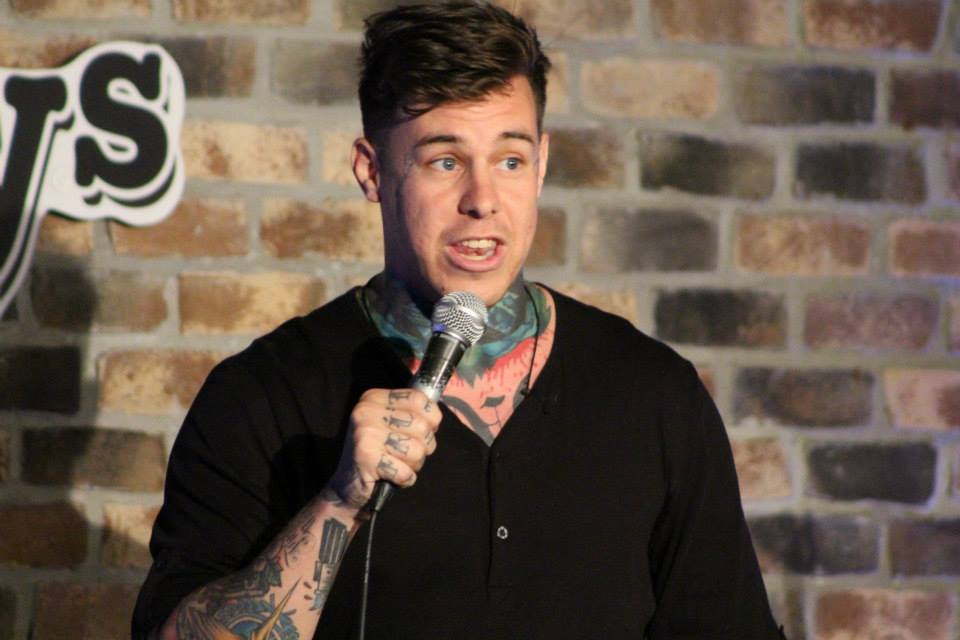 I have to start out by saying I hate Shayne Smith, because he is funnier than I am. Smith is by far the nicest, most tattooed guy you’ll ever meet, and he’ll leave you debilitated with laughter after every conversation you have with him. Actually, you can’t hate him, he’s just too nice of a guy—and one hell of a stand-up comedian. A newcomer to the Utah comedy scene, Smith has burst out as the comic to keep an eye on in under a year. Already making a name for himself in Utah, this guy is going places, and we’ve got him first. SLUG got a lucky chance to meet up with Smith at a diner in Salt Lake, and we discussed comedy, life-lessons and the Muppets.

Smith graduated quickly from the open-mic scene to getting his first show last December. Since then, he’s hit the stage with local comedy staples Comedy and Other Opinions and Wiseguys Sunday Night Special, he opened for Tony Hinchcliffe, and he’s made it to the final round of both the Wiseguys and Club 50 West comedy competitions. “I’m still surprised people think I’m so funny. I’m waiting for it to be like one big joke,” Smith says, “and then they stop booking me and tell me to go kill myself.”

The fast rise to recognition had a few bumps in the road. He essentially gained stage time so quickly, that he was still working out his rookie period in the beginning, figuring out the little tricks of the trade as he was going. He made it look so easy, but was it? He laughs, “I’ve had some terrible shows!” He did a “clean” show, but didn’t realize until he got there and had absolutely no squeaky clean material, so he just riffed on stage for the audience. “I’ve offended people,” he says. “I’ve had people confront me about some of the offensive things I’ve said.” You learn as you go, sometimes a joke may seem insensitive, and you’re not sure the audience will take it well. The offensive joke in question is out of his set now. “I mean as far as rookie stuff goes, I’ve had hecklers heckle me and then I’ve tried to make comebacks and been defeated by the heckler,” he says. “That’s never good. Being defeated by a heckler is the worst possible thing that can happen onstage, in my opinion.” He’s taken moments like those and built off of them to become a crowd favorite and tell accessible, mostly light-hearted stories in his act.

Smith’s style onstage is what gets him the audience’s attention. He’s always positive, not cynical with a little dash of physical comedy. He takes inspiration from all styles of comedy, and he draws from everything he encounters. “I don’t care about really being original or about being new, I just care about being authentically me and funny,” he says. Part of his unique style is breaking away from stereotypes and what could have easily become his image. “I’m pretty unapologetic about how goofy I am,” he says. “I think that my appearance doesn’t match my personality. I appear as someone who would maybe be mean or closed off, serious all the time, but in reality all I want to do is play Warhammer 40,000 video games and watch Adventure Time and be as goofy as possible.” 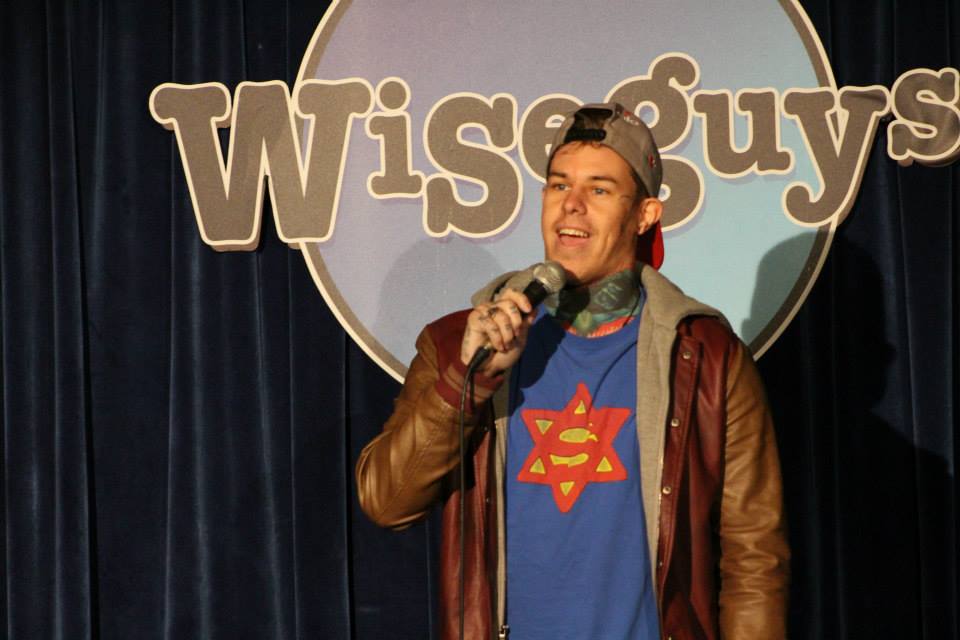 For Shayne Smith, getting in with the comedy community was “super intimidating,” he says. “There are these huge vibrant people both physically and metaphorically that are just coming at you. It’s kinda like when you want to be a comedian you are just kind of the loud guy that’s at the dinner table making everyone laugh. And then you become a comedian and you’re at the dinner table with nine other loud guys making everyone laugh.” The intimidation wore off quickly and he embraced the scene. “Meeting other comedians has been my favorite part of comedy so far.”

Smith grew up in small town Fillmore, Utah, wrestled in school, and played sports. “I grew up with three brothers with a mostly single mom throughout the years. Lots of hilarity ensues when you’re left to your own devices as a kid. You have to fend for yourself in a lot of weird situations.” Despite looking rough around the edges, Smith lives a straight-edge lifestyle, which doesn’t actually bother him doing comedy at bars and clubs. “I practice my sobriety responsibly,” says Smith. “So as long as people practice their un-sobriety responsibly, I’m down with everyone’s personal decisions to do what they want to do.” So how did a guy like him decide to get involved in comedy? “Genuinely the number one reason is that I have no formal education, I’m covered in tattoos, and I’m kind of a fuck up and I can’t sing or dance. So here I am,” he says, laughing.

His self-reflexive humor doesn’t come across as down on himself—rather, he can just see how funny it may be from an outside perspective. Despite the jabs, he still thinks positively of himself—he just loves the awkward situations. “I just really like making people happy.” He adds that he really has no problem being seen as cheesy or lame. “Making people laugh and watching someone have a genuinely good time and laugh from the belly is awesome,” he says. “I just want to put as much positivity out into the world as possible. I feel like my skill set is such that comedy is the absolute best way for me to do that.” Most comedians will begin to name off the legends as their influences, but not Smith. “My main comedic influence has probably been the Muppets.” At this point, he keeps talking about how fun and smart the Muppets are and he’s completely beaming, but then he stops. “I started thinking about Muppets and I lost track of where I was.”

It’s probably not a surprise for anyone who has seen him recently, but Smith is pretty comfortable onstage. “I wasn’t always comfortable, it took a lot of work and strategy to get over how nervous I get,” he says. “Because I used to get so nervous I would shake and feel terrified.” Stage-fright is a normal part of all comedians’ journeys, but his was really bad at first. “I would combat that through self visualization. I would visualize the best possible scenario and the worst possible scenario.” He had an interesting strategy that he based off of The Book of Five Rings about the Samurai code. “They wake up every day thinking they are already dead, then in everything they do they are unafraid.” He translated this to the stage. “I would imagine I had already bombed. I’d basically fake confidence. I started finding other open mics and I’d go to them without material and go up purposefully bombing over and over again. I’d just put myself in these horrible situations.”

Shayne Smith’s strategy evolved when he still didn’t get the results he was after. “At one point I got so mad at myself for being nervous that I started doing weird things to make myself embarrassed, like just laying down at Starbucks on the floor, or I would just scream in public places. I started doing goofy things, I purposefully started trying to embarrass myself. I started sabotaging myself in public. Eventually I started getting over being embarrassed, and then being on stage was like ‘whatever’. What’s more embarrassing than laying down in the middle of a busy Starbucks? People were like, ‘who’s this asshole with all the tattoos taking a nap in the middle of Starbucks?’ Eventually being onstage was kind of like ‘What’s the worst that could happen? I’m embarrassed?’ I started to realize that I couldn’t be embarrassed anymore onstage, and once the crowd has no power over how you feel unless they making you feel good, that’s when I really started to progress as a comedian.”

Now he loves being onstage, and it’s all he wants to do. “It’s everything,” he says. “It’s the best feeling ever.” He’s got sage advice for anyone who has ever wanted to be an entertainer. “Don’t be afraid, but it’s also O.K. to be afraid.” He wants to see stereotypes broken down, and women to be unafraid to join in the conversation. “Comedy is for everyone, get out there and be”. What’s the worst that could happen?” He is passionate, and driven, and wants this to ultimately become his career. He says it’s all about “Funny over everything.” “It doesn’t matter if it’s offensive, or if someone may think you’re a hack, or you’re unoriginal or you’re being dorky, goofy, or you’re not clever enough, or too clever. None of that matters.”

Right now, he’s finishing up the 50 West Salt City Comedy Competition, but he’s taking a short break from the stage. He’s about to get married to the love of his life, Erica, so at the moment he’s concentrating on that. Instead of wanting to get people out to see him specifically, he’s passionate for people in the city to just get involved in local comedy. “Support comedy! If you want to do comedy, do comedy because it’s great. If you want to watch comedy go watch. Go anywhere there are funny people and have fun. Come out to Sandy Station, to Wiseguys, to 50 West, to Mo’s. Go out to where there is comedy and have a great time.” He ends on a happy note, with his personal message to the world- “Everyone, keep it positive.” You can follow Shayne Smith on Twitter @Shaydozer and check him out onstage all over the valley.