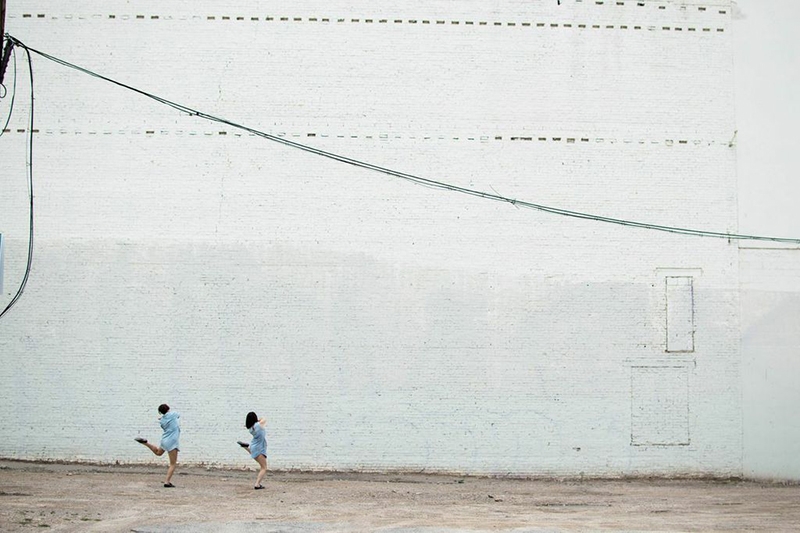 This past weekend, Two Boots, comprising two young choreographers, Katherine Adler and Samantha Matsukawa, presented an evening of dance outside, in the middle of Edison St. between 200 S. and 300 S. When I attended on Friday night during the middle of Gallery Stroll, Salt Lake City felt about as alive as I can ever remember it being. The strung-up lights that criss-crossed the little alley within an alley (between the Broadway theatre’s parking structure and the building to the north) made me feel like I was walking into a party. “In a few months,” I thought, “I’ll probably remember this as one of the last moments of this summer.” And there was free beer.

Adler and Matsukawa’s collaboration this past weekend wasn’t full of surprise, and I mean that in a good way. It reminded me of an experience all too lacking in dance which is often the province of literature. Dylan Dances, which actually felt like one big rambling dance, reminded me of the experience of diving in to the third or fourth novel by an author you really love. The themes and maybe even the plot lines are much the same, but it’s no less worth hearing again in a slightly different way.
I’ve been watching Adler’s (and to a lesser extent, Matsukawa’s) dances for quite a while now. Visually and in casting, much of of what we see in Dylan Dances appears to come from Adler’s earlier work. Throughout the evening, everyone is wearing denim, and, at the risk of restating the obvious, dancing to Bob Dylan songs. It’s superficially reminiscent of the original version of Adler’s work year before last at Daughters of Mudson. However, there’s something in these dances that departs from the ’80s Gap-ad slickness of those Dylan etudes. As much as it is Adler’s dream we are seeing here, I think we are seeing Matsukawa in the execution of dance phrase-craft. That’s where the real joy of these dances lies, in grooves and fissures where sentence-long narrative, word play and kinesthetic puns pop in and out of existence as the tight layers of steps, nostalgia, and sung words tear at each other like sand paper. It’s Adler’s fantasy; Matsukawa is the ghost writer, her unique way of cutting up rond de jambes slipping even into the way Adler moves.
The strongest moments in this evening are the most abstract, reminiscent of the some of the American visual art of Dylan’s heyday, playing with formalism and pop. I remember vivid solos by Matsukawa and Molly Heller, in which the dictionaries of modern dance and ballet seemed to have been upended into Dylan’s particular thesaurus. In one passage, performers took turns dancing in front of a floor made of paper as it was being constructed, panels of butcher paper rolling out just like Marley floors are laid out in a traditional theatre. This was a moment of genius—John Jasperse on a budget. Another unintentional, but equally brilliant moment was when Dylan briefly gave way to Kelis’ “Bossy,” which was playing at one of the nearby bars. The dance soldiered on, ignoring the context shift.
The night also featured some more overtly interactive moments. At the ending of one section, the cast handed out PBR to the audience, everyone dressed and undressed for no reason, and finally, the three would-be Bob Dylans—looking like blithe college boys in varying states of beardedness—played “Wagon Wheel” (which I didn’t know had been sketched originally by Dylan) while the women performed a pseudo-pagan circle around the men. While these moments to me highlighted what was arguably homogenous and predictable about the evening, they certainly added to the party vibe that made the event what it was.
Photos: