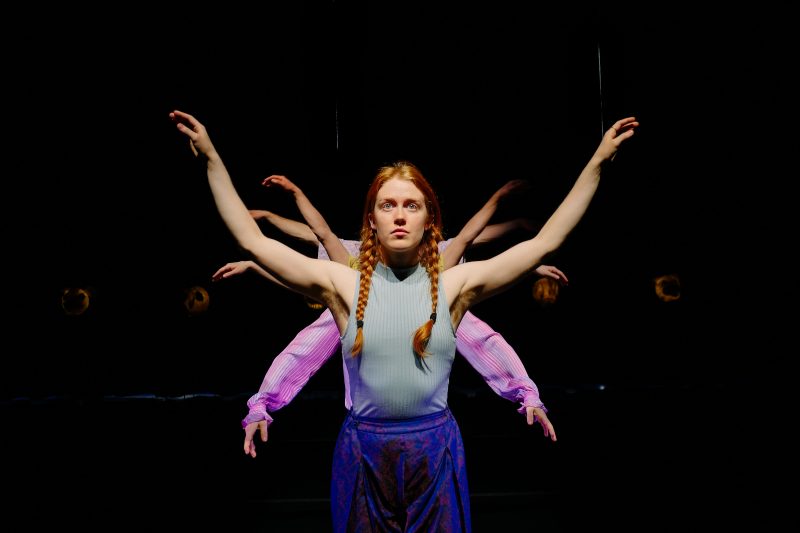 Molly Heller is a visiting assistant professor in the University of Utah’s School of Dance, an adjunct faculty member in Westminster College’s dance department, co-owner of the Tea Grotto and the director of very vary. Presented at the new Eccles Regent Theater May 11-13, Heller’s new work is a captivating display of her research that views performance as a healing practice. Her approach to the craft focuses on relationships between emotionality and physicality, which consistently results in theatricality. very vary is reminiscent of qualities that have come out of Heller’s past processes here in Salt Lake City, but while it’s an evening-length performance, it successfully transcends any unresolved itches. Watching this work felt like there were no reservations and no omitted moments, but also no unnecessary ones. In its fullness I sat consumed, which is typical while watching Heller’s creations, but this one owns a special charge.

very vary is a book with 14 chapters brought to life by performers Marissa Mooney as the doe, Nicholas Blaylock as the monkey, Melissa Younker as the honeybee, Florian Alberge as the fox, Mary Lyn Graves as the lion and Yebel Gallegos as the seahorse. The architecture of the theater exposes the city, and as the sky begins to discolor for the night, papier mâché animal heads built by Gretchen Reynolds that are rested upon tripods and begin to glow. All six of the characters arrive and suddenly introduce themselves quite firmly, as if they were to be the loudest aspects of themselves in that moment and expand the capacity of the room. Each character maintains their own flair in their hands, in the way they walk and how they interact with each other. They are each distinct in their roles from start to finish, as declared animals and by the nature of Heller’s design—but the narrative is not linear. There are chapters of audible text from the performers, which relay casual stories that evolve into descriptions of fears, bouts of yelling at the audience and bold announcements—and the narrative remains abstracted. The experiences and characteristics of the performers cue the audience into a story without revealing any exactness about it. There are hints, however, and together with live sound by local musician Michael Wall, very vary becomes about the parts of a book that aren’t read, but felt.

Throughout the tangled layers of the dance, the audience begins to discover more realities about each performer. Alberge, the fox, yells blips about yelling, and elaborate expressions run their course through each muscle. Younker, the honeybee, inhabits the space with articulate grasps of her fingertips and intense focus. Graves, the lion, carries out quick-footed movement with attack and a serene presence. Gallegos, the seahorse, leaves a trail of vibrancy. Mooney, the doe, bursts the previous structure with flickers of tension, shifting the whole body. In contrast, Blaylock, the monkey, is on the floor moving minimally within some other physical force that causes struggle. Meanwhile, the rest join in on a playful march up the stairs in the audience, even singing a melody made by various marching-band noises, leaving behind Blaylock. He appears childlike, mistaken or discouraged as the others parade themselves while he remains standing, watching. The constant flow of images in Heller’s work are strikingly clear but possess an openness about them that allows the audience to witness what they have felt heretofore.

The experiences of the performers throughout the piece quickly dissolve just in time for the arrival of new ones, instances fade and nothing that could ever be expected becomes what’s next. The performers’ animalistic sensibilities enliven in each chapter, unveiling a world of attempts, cautiousness and interruptions within each character. After following the tide of emotionality that takes over the characters, it curls back, sending them in a line fully confronting the audience. Cluttered phrases directed at the viewers beginning with “We are” come to an abrupt stop by precise statements from each one, beginning with “I am.” All powerful moments lead right to the next.   One by one, they each get drawn toward the glowing heads. The animals’ next task is to tie those glowing heads onto their own heads, and they do so by each other’s guidance. The heads cast a dim light on the surrounding faces. All the lights fade to black except the glowing heads, and they begin to appear like lanterns floating away. The magic vanishes slowly and whichever pieces the audience members cherish drift toward them to keep.

In Heller’s work, the presence of each performer in dynamic circumstances sweeps up viewers and sets them down with tears and grins. It perpetually unravels new aspects of the characters and their relationships, never allowing a single bare expression, a neutral body or any certain visual to linger.   The work is meant to be seen, as it is full of indescribable in-betweens, returns, releases, pleasures and defeat; recognizably felt parts of life and everything redolent of poetry. Donate and stay tuned to the future of very vary at fundly.com/m2/very-vary-a-new-dance-work-by-molly-heller.