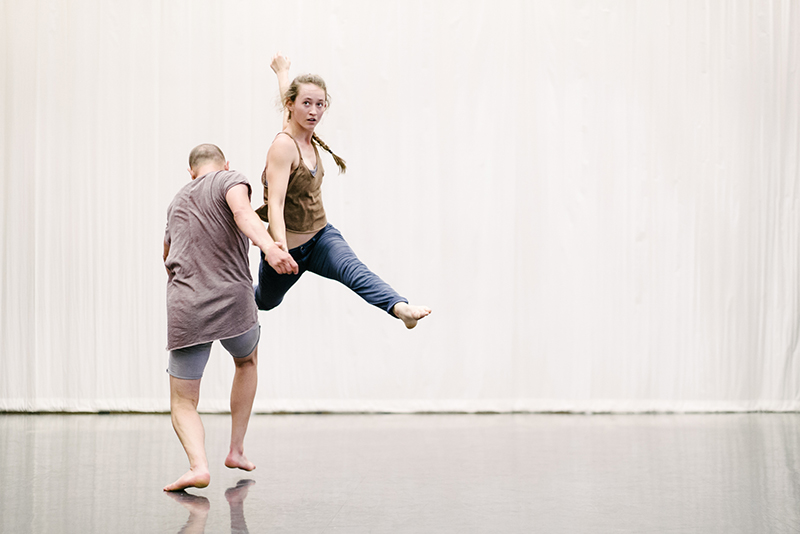 VAULT!, described as “an intimate studio showcase of contemporary dance,” premiered in the afternoon of Aug. 5th. Hosted by Nichele Van Portfleet and sponsored by loveDANCEmore, the show also supported work by several other local artists, including Justin Bass, Michael Crotty, Dan Higgins, Daniel Mont-Eton and Breanne Saxton with Eliza Tappan. Set in the round inside one of the studios of The Marriott Center for Dance, the showing was more relaxed and unconventional. After live pre-show music from Casey Van Portfleet, an afternoon of raw and unfinished clips and excerpts of full evening length pieces began.

Saxton enters the performance space with a mic and introduces herself as well as a child. Within a casual interaction considering the space set for performance, Saxton and the child bring a lighthearted conversation to a close, beginning the movement of the opening work of VAULT! . As the child is then given the mic to read a book by Dr. Seuss, Saxton enters the open space with the mic stand. This first section created by Saxton and Tappan begins introducing the audience to the roughness and split seams of Instantaneous.

While the story is being read, the audience views Saxton tumbling around and navigating movement with the mic stand. The object remains still enough for her to grasp onto it and to avoid the structure of it with struggle as she slithers through it. It travels with her, too, as she investigates climbing and stepping through movement with this separate object. The piece soon cuts into this experience of exploring the structure of the tripod shaped mic stand, with a monologue of grief, making amends, dreams and goals. It’s a sharp transition, however, the conversation at the beginning of the piece gave it a foundation. A song from Saxton at the Piano in the corner of the studio cuts into the talk, ultimately arriving that the work never intended to be solid. The framework and performance of Instantaneous is intertwined, as it is non-performative and personal. Which proves to be successful to me. 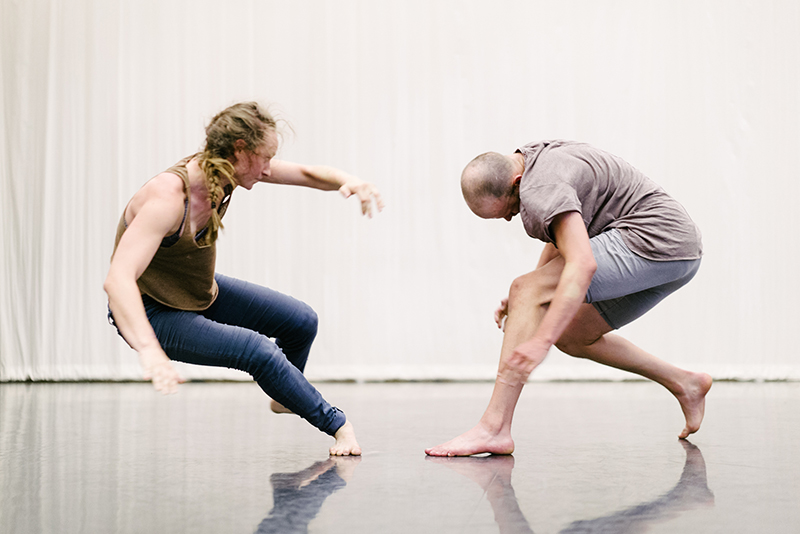 Crotty’s work shown in VAULT! features a duet that is described as a “first glimpse into his developing work, Pohly and Jones”. This new work to be developed by Crotty, recent MFA graduate from The University of Utah is to explore “how varied points of view can co-exist without either being compromised”. In this glimpse, two women frolic into the space. Choreographically in unison for most of the piece, the two are confined to this binary in movement of standing strait up on two feet or rolling on the ground. The movement of flicking up bent legs with subtle shifting of the chins along with smirks and smiles carries the two through what appears as a motif in the work. In this work in progress, I was not able to successfully recognize the two different viewpoints exploration stated in the press release, however I did see an underlying narrative in this duet that is specific to a what is typically feminine in performance as a movement quality.

Mont-Etan adapted a solo from his recent show Homeward to the round setting in the studio. The title of this excerpt, Home as Body, presents conceptual thoughts about the relationship between home and body. Mont-Etan surfs the roundness of the performance space in this solo. No movement is particularly stark, however, where he goes in the space is. It becomes distinct when he is traveling versus arriving. Drifting with circular movements, occasionally spoking limbs out from his center, he lands in spaces in close proximity to audience members. In these places he gets pulled back into a search of some kind. I interpreted Home as Body as an ever shifting, openly lived experience that was to be defined by the viewers.

Bass brought to VAULT! a solo entitled, Four or more, performed by Luciana Johnson. The designated performance area was set with a rug, a coffee table and a glass vase. Johnson very lightly moved through being stuck in crooked positions of her spine to Kiss Me by Sixpence None The Richer. Around the little living room style set, Johnson flickered in energy a bit within her serene movement experience. On one leg almost flying backward she caught her balance, returning to captivating the audience with a contrasting force from her eyes. This new solo has a literal “evening” vibe, and Bass is planning to develop it into a full evening length work.

Van Portfleet developed Stranger Kin, a duet between Saxton and Brian Gerke, alongside the mentorship of Doug Varone. Varone, a prevalent New York based artist held a one of a kind workshop for choreographers entitled DEVICES. Stranger Kin, the culmination of this mentorship and workshop, is described as “ a physical meditation on the variety of infinite ties we experience through our various, most intimate relationships”. The work unquestionably explores exactly that.

The piece begins and continues to alternate through solo moments between Saxton and Gerke. Solo moments, or moments of separation between the performers of Stranger Kin signify a volatile moment in their partnership is to follow. Both bodies are pushed to limits when it comes to length in movement, as limbs extend and spiral into the ground with great strength and effortful poise. After bouts of interlaced limbs and forceful presses and pushes between the two, moments of being unraveled particularly stand out as forceful as well, although physically milder. The relationship becomes so clearly defined as it’s own being that solo moments change the environment. The experience of Saxton and Gerke, moments of aloneness, ass slapping, impossible reaching and interdependence between each other is highly physical and transcendent of anything mundane. The work profoundly dives into all of the possibilities of what makes up intimacy.