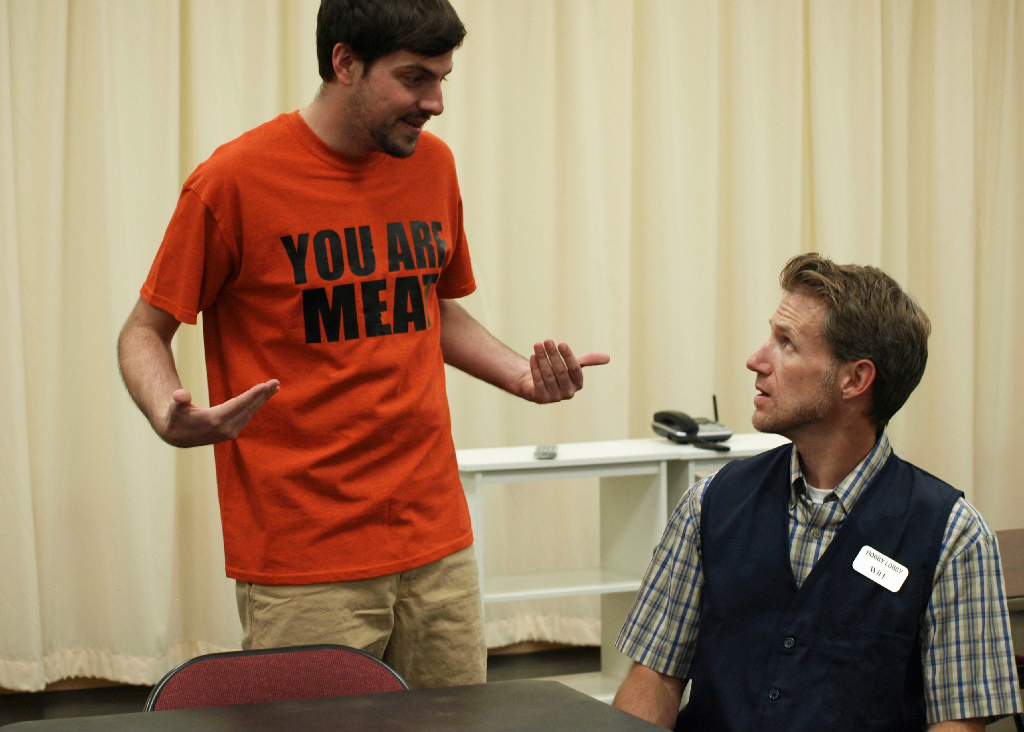 Of all the uncomfortable plays I’ve seen in my life, A Brand New Boise, written by Samuel D. Hunter, has made it near the top of my list. That said, Wasatch Theatre Company continually kills it in the acting department, bringing professional and dimensional actors to the stage. Marketed as a “dark comedy,” A Brand New Boise is about a man named Will, played by Brian C. Pilling, who fled his fundamentalist church after a major scandal ensued and heads to Boise to meet his estranged son, Alex, played by CJ Strong. Will hopes to connect with his son before the Rapture, which he is convinced is just around the corner. Pulling a completely creepy dad move, Will applies to Alex’s workplace: a Hobby Lobby—but he doesn’t reveal his identity to Alex or the rest of the crew right away. This team of Hobby Lobby employees might just be the most awkward group of humans alive: they’re clumsy, pause for far too long between sentences, and have weird quirks that add to the awkwardness. Halfway through the play, I realized that the “comedy” was long gone—and there was little to begin with. The characters either lose grip on reality completely or lose it on each other. By the end of the show, the audience (including myself) sat in silence. I still can’t figure out if the play was trying to convince me to join a cult or renounce religion altogether. Add a cliché ending to the mix, and you have the premise of the play.

Despite the limited amount of comedy, the sad cliché and the confusing God message, Wasatch Theater Company did a fantastic job for what they had to work with. Director Jim Martin chose a quite believable cast. If uncomfortable is what the play is going for, these guys nailed it. Pilling definitely had me believing that he belonged to a fundamentalist cult—his stiff demeanor, unblinking stare and hesitant voice created an atmosphere in the break room of the Hobby Lobby that made everyone else fall silent many times. Continually, Will talked about “finding meaning in the meaninglessness,” and his negative attitude about life and toward people was more than leaning toward insanity. A few times, his body language was so intense that I thought his character was going to hurt someone or himself. Strong also perfectly played the moody teenager. Costume designer Linda Eyring dressed him as what I like to call the “emo hipster,” in all black with a slouch beanie, long hair in front of his face and headphones to tune people out. He frequently threatened his father with “I’m going to kill myself”—so much so that it became a running joke throughout the play. Alex is also a “composer” who creates music that’s a mixture of techno music and terrible slam poetry. The tension between father and son was intense, and even led to Alex having a panic attack—which Strong made believable.

Where there was comedy, it was mostly brought on by the Hobby Lobby crew. Leroy, played by Gordon Dunn, is Alex’s brother. Leroy’s introduction to the audience was the lights flashing on, and the first thing I see is a kid sitting in a chair wearing a T-shirt that says, “FUCK.” We soon learn that Leroy is an “artist” who creates these shirts in order to “deliberately make people uncomfortable,” making me wonder even more if this was the playwright’s intention when writing this play. Leroy was the comic relief from his depressed brother and creepy Will. Anna, played by Haley McCormick, was also pretty funny and was the first character to feel sympathy and affection for Will. McCormick added a more hopeful outlook to the rather dark play, even though her character was obsessed with stories that ended in death. When Will is secretive about his fundamentalist church, Anna invites him to go to her church, but also says he needs to be selective about which church you go to: “It’s like choosing a car!” My favorite character, however, was the Hobby Lobby store’s manager, Pauline, played by Sallie Cooper. Pauline is the type of boss no one wants to have, but everyone wants to meet. She fronts the Christian-run store—but is far from being a Christian. Frequently, Pauline and Leroy scream, “Fuck you,” at one another, and when she’s not yelling at Leroy, Pauline is running around looking for an offstage employee named “Mandy.” Cooper fed the audience dry humor and strong language, but she also always brought peace to the stage when she walked on. She’s the most realistic of the bunch, saying, “What people believe doesn’t fucking matter. What matters are real things,”—and then proceeds to hysterically praise consumerism.

The religious—or debatably religious—characters in the play are obsessed with death. The play is more of a religious tragedy with a sprinkle of dark humor, but I wouldn’t quite categorize it as a dark comedy. Although the play asks if life has meaning without God, these characters demonstrate the mental trauma and hardships that can come with believing that life is meaningless without a god to look up to. Wasatch Theatre Company always has a way of taking whatever falls into their hands and working hard to create a unique and entertaining production—no matter how uncomfortable the content may be. I applaud them for adding dimension and a unique flavor to every script they perform.