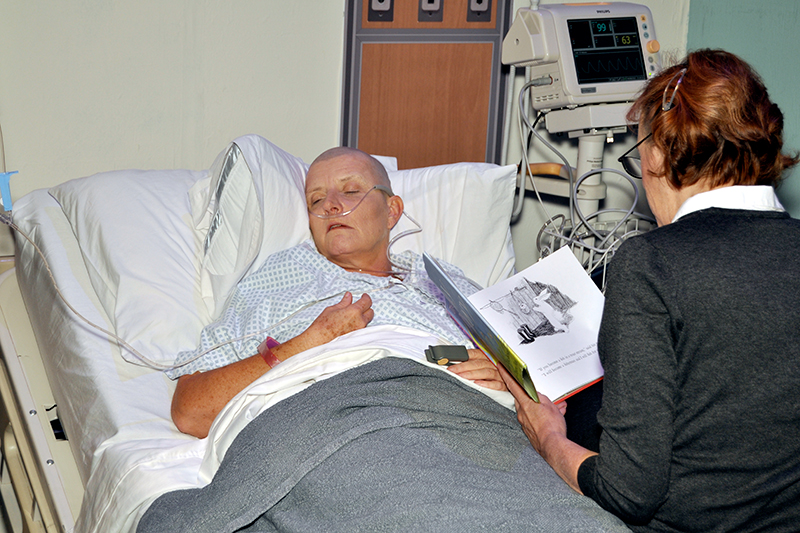 An Evening with Cancer: Reviewing “Wit” by Wasatch Theatre Wit follows the memories and cancer stages of Vivian Bearing, an older yet full-of-life English professor obsessed with metaphysical poetry and John Donne. She is tough, scholarly and (shall I say it?) extremely witty. Sanderson miraculously pulled off the difficult feat of memorizing nearly 100 minutes’ worth of dialogue. The actress never missed a beat, never broke character, and was never unbelievable. Though the set stayed the same, the setting quite often shifted depending on Vivian’s memories. At one point, Bearing’s memory took place in her five-year-old self’s memory, and Sanderson immediately jumped to the ground, picked up a children’s book and struggled to read words out loud to her father. At another point, Sanderson transformed from a dying cancer patient, able to stand only by the support of her IV pole, to a young, scholarly professor (who, I honestly thought, was going to call on an audience member, expecting them to understand metaphysics of Renaissance poetry). Each moment in the theatre felt real, thanks to this outstanding actress. The set, designed and well executed by Kit Anderton, not only appeared exactly like a hospital room; it smelled like one too. I’m not sure how they managed to pull off making a theatre smell both like cleaning supplies and decay, but it instantly reminded me of a hospice. As I walked into the studio room, I was asked to use hand sanitizer “before entering the hospital.” This small but lovely gesture greatly added to the sensory effect of the theatre. The sound of a heart monitor and office telephones filled moments when Sanderson sat and stared at the audience and asked us to experience just a moment of Bearing’s boring, lonely hours in the hospital.

By the end of Wit, I was in tears. Susie Monahan (played by Haley McCormick) had been Vivian’s nurse in the play, and they had discussed the option of DNR (meaning, do not resuscitate) should Vivian’s heart stop during the cancer treatments. A major plot point is that Vivian’s cancer treatment is experimental; in other words, many of the doctors treated this patient as less than human. At one point, Sanderson’s line was, “I have become the specimen jar.” The most brutal moment was when her heart did stop—the actors rushed onstage as doctors, brutally grabbing her body at all angles while Dr. Jason Posner (played by Nicholas Dunn) cruelly stood by while Susie screamed, “DNR! She signed the paperwork! False code!” It was heartbreaking, terrifying and very eye-opening as to how some patients are treated in hospital care.

Wit was one of the most exceptional, beautiful productions I’ve seen in a long time. I don’t remember the last time I cried so much and laughed so hard in the same hour and a half. This show challenged me intellectually, asking me to think existentially about the meaning of life and also brought up many questions about our medical care centers. Are we treating our elders poorly in hospitals? How far should we go into patient experimentation, even if the results could save lives? And what is most important in life: living with ourselves and the careers that we’ve built, or living with our friends and family who will not soon forget us? Well done, Wasatch. Thank you for an incredible evening of theatre.