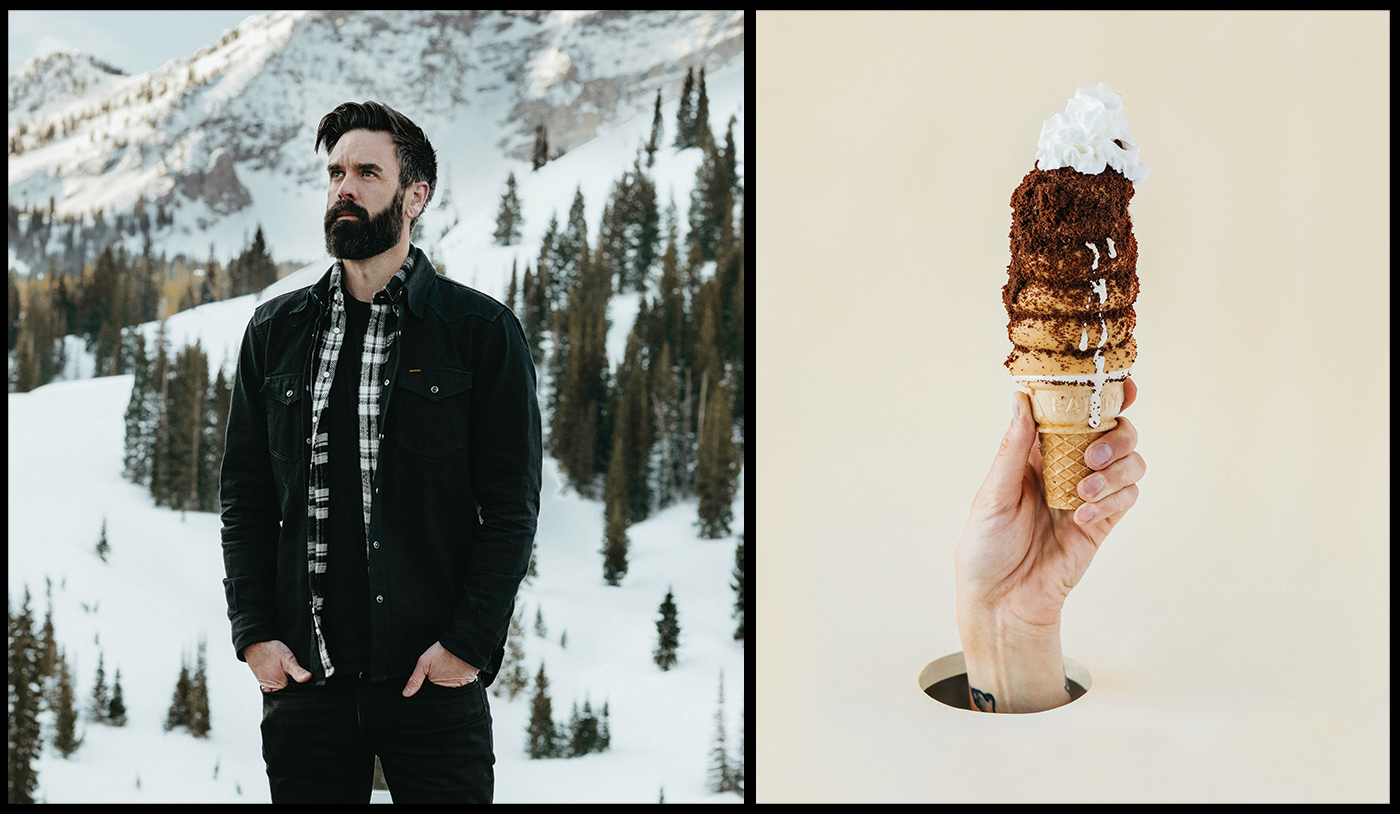 It was SLUG’s first Local Design issue in 2017, and we were on a tight deadline for the issue’s cover. A friend of SLUG had pointed us to a photographer/designer she highly recommended, Brent Courtney. Right off the bat, we had a good feeling about him upon meeting him. He worked quickly, and what resulted was an outstanding cover: a composite image he took and edited that comprises a building in the Avenues and a red, vintage sign from the Siesta Motel on State Street. He updated it flawlessly to read “SLUG” against a clear-blue sky. Upon first seeing his composition and how he refined it, I was simply blown away by Courtney’s artistry.

After a long day of finalizing that issue, I happened to run into him and his partner at Copper Common, and he was as cooly affable as his cover was cooly alluring. Moreover, as SLUG’s Editor, I received compliments on the cover once it had published—a copy editor even reported that her mother had framed and hung it. Although it was for our Local Design issue, Courtney’s penchant for photography was clear.

We invited him to make another cover for us for our 2019 Local Photography issue, for which he placed an image of a photo enlarger into another image of a phone booth on the side of a road. The execution is equally flawless—you wouldn’t know the amount of time and craft that went into it because of how unassuming it is as a photograph.

“I don’t want the viewer to know what I shot in-camera and what I’ve added.” 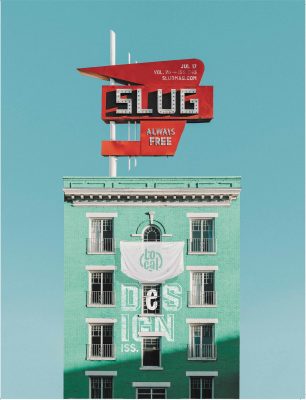 Courtney takes pride in this skill that he’s spent years honing. “One of my main goals in Photoshopping is to create a seamless image,” he says. “I don’t want the viewer to know what I shot in-camera and what I’ve added.” Just as understated as his Photoshopping are Courtney’s gradual beginnings as an artist. Courtney is originally from Canberra, Australia. “I’ve been a graphic designer for over 15 years, doing my initial study at the Canberra Institute of Technology,” he says. “From a very young age, I was interested in art and illustration. Like the well-trodden path of the artist, I searched out a career that would pay the bills.”

Courtney began his design career creating employment ads for the Australian government—“it’s as exciting as it sounds,” he says of the occupation that, later, took him to an advertising agency where he did similar work. A big client of this agency was a women's clothing brand whose image editing was outsourced, since his employer “didn’t have the internal resources,” Courtney says. “I saw this as an opportunity to get out of newspaper advertising. I researched editing short-courses and approached my boss with the idea. This led me down a career path working for three clothing brands and me taking a similar approach in progressing my skill set throughout my career.”

Courtney cites taking up photography in 2012 as a hobby, then professionally in 2014 upon his move to Salt Lake City from Sydney. In his previous graphic design jobs, he had coordinated photoshoots and the post-production of images, “but was never the person behind the camera,” he says. “I was given the opportunity to do some small shoots for a company I was working for in Salt Lake about five years ago. The opportunities grew from there, and that led to freelance shoots, which over time put me in a position to work full-time as a freelancer.”

"I take pride in being a one-stop design shop for my clients.”

Soon after moving to SLC, “I started working for a healthcare company that helped people remove the friction from managing their chronic diseases,” Courtney says. “This took me down a career path of user-experience design, which has greatly changed the way I think about the way design can be used to solve problems in all aspects of my design skills.” 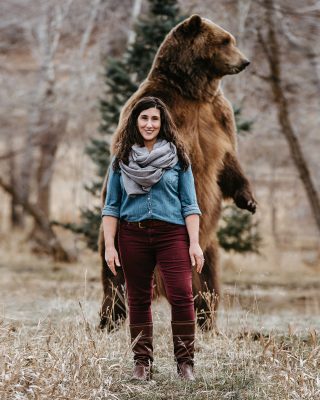 If you take a look at his website, UI/UX design of his clients is just as stunning as his photographic, illustrative, branding and other work. Hence, it’s a bit of understatement that he was “taken down this path”—Courtney has cultivated a veritable ecosystem of well-rounded visual art talent. Yet, he remains humble. “I wish I could say all my skills have come from landing dream jobs, or that someone saw my talents and offered me a job, but many of my career pivots have come from trying to fill a skill gap in companies I’ve worked for,” he says.

And by and large, Courtney is self-taught. For instance, after fudging a résumé regarding his InDesign knowledge, “I picked up InDesign quickly enough that people didn’t notice,” he says. “Short-courses like Skillshare have been instrumental in helping me pivot or add that additional skill that has helped me move to the next stage in my career. I’ve watched hundreds of hours of YouTube videos about Lightroom, learning every tool’s function, and creating a style of my own.” Courtney also clarifies, of course, that he doesn’t advocate lying on a résumé—“but definitely all for faking it until you make it.”

When it comes to his freelance commercial photography, Courtney has taken root in working with local businesses. He feels that he gets the opportunity to share his skills and also learn from local clients. Having felt daunted when he immigrated to the U.S., he is grateful that our community was welcoming to him. Additionally, “Because I am a permanent resident, and not a citizen, I can’t vote in elections here,” Courtney says. “However, I am civically engaged, and I use my photography and design skills to contribute to political campaigns I care about, like those of Shireen Ghorbani, Derek Kitchen and Erin Mendenhall. I’m proud to be a small part of electing smart and progressive people to office.”

"Once he began to take his photography skills to the next level, he delved into hours of tutorials." 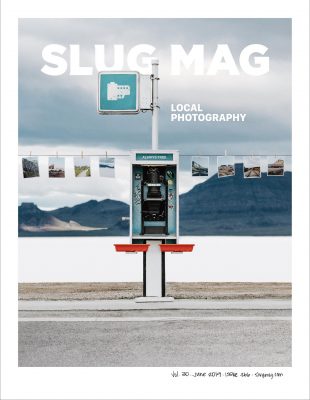 Not only will Courtney snap the photos for a client, but he’s also there for the next steps of their marketing and branding. “Being versatile has definitely helped me in my career,” Courtney says. “Being able to offer a client [a multifaceted] expertise has won me jobs I may not have gotten. I take pride in being a one-stop design shop for my clients.”

Like his work in design, Courtney vies for his photos to be “clean, balanced and minimal,” as he puts it. This is evident in the commercial photography seen here. Additionally, if you take a peek at the photos section of his site, the street photography follows this same attention to craft—in this instance, I’m thinking of the photos of the basketball players and of the horse.

This sense of style also results from Courtney’s dogged commitment to teaching himself. Once he began to take his photography skills to the next level, he delved into hours of tutorials. “A tip I heard early on from one of these tutorials was to limit your lens use and use a wide-angle prime lens exclusively,” he says. “The idea was that the more limitations you had, the more you had to work and learn to get the shot. I started using a 35mm prime, a classic street-photography lens.” Putting this instruction into practice, Courtney would rise early and walk the streets to take photos.

“I would have to use my body as the zoom, getting closer to the action, learning how to be patient and getting to know light,” he says. “When I went up into the mountains, the wider-angle lens made me think about composition a lot more, and made me learn how to achieve balance, minimalism and symmetry. This definitely made me a better photographer.”

Courtney certainly is a Swiss Army Knife when it comes to the visual mediums he works in. Before I knew any of this background, his synthesis of photography and design was my first impression. And though his online portfolio and the brunt of the images featured here are more commercially oriented, the kind of magic he wields with photos like “Mocha Composed Cone” and his SLUG covers led me to inquire how he achieves a product that, in my eyes, borders on contemporary conceptual art with a vocabulary all his own.

“The short answer is: a lot of planning,” Courtney says. Once we gave him some conceptual direction for the 2017 Local Design issue, Courtney had an inkling that he wanted to use Avenues architecture and “a vintage sign from somewhere in the city,” he says. “I spent a lot of time driving and walking around the Avenues looking for the perfect building.” He returned to each spot in the morning and afternoon to gauge the best lighting for each object he was to shoot.

“The moral of the story is that sometimes you have to sleep in a sketchy motel in Wendover to get the shot.”

“I shot the building one day, and then went and shot the sign the next day at similar times to make sure the shadows and lighting were the same,” Courtney says. “The preparation on the front end always makes for better results. A lot of time was spent manipulating the Siesta sign to say SLUG and adjusting the hues of the building to complement other colors in the design.” If that’s not planning, I don’t know what is. 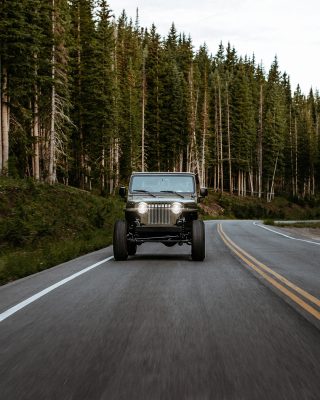 With the 2019 Local Photography issue, on the other hand, Courtney reveals that the image may appear to be more digitally composed than it actually ended up. For this shot, he had borrowed a photo enlarger from SLUG. The rest of was a product of his vision:

“I actually set everything up on location,” Courtney says. “I saw an image online of the phone booth at the Bonneville Salt Flats. I used Google Street View and virtually drove down the I-80 checking every rest stop. The concept was integrating the enlarger into a fixed part of an environment, but the enlarger was too big to fit in the phone booth, so I built a box to surround the enlarger with LED lights to simulate the phone booth lighting. I placed it next to the phonebooth to make sure the shadows and lighting were the same.

“I strung rope up from either side, attached the end to a ladder, and pegged photographic paper to it. The developing tray was gaffer taped to the bottom of the booth (and in post duplicated to add the second tray). I did this all twice because it rained in the afternoon of the first try. I spent the night in Wendover, and the weather cleared in the morning. There was a lot of work done in post, but a lot of the heavy lifting was done in the shoot.”

At the end of the day, Brent Courtney seems to be bent on continually creating new challenges for himself and rising to meet them to grow. The means by which he’s arrived here are just as compelling as the final product he creates.

Courtney says, “The moral of the story is that sometimes you have to sleep in a sketchy motel in Wendover to get the shot.”