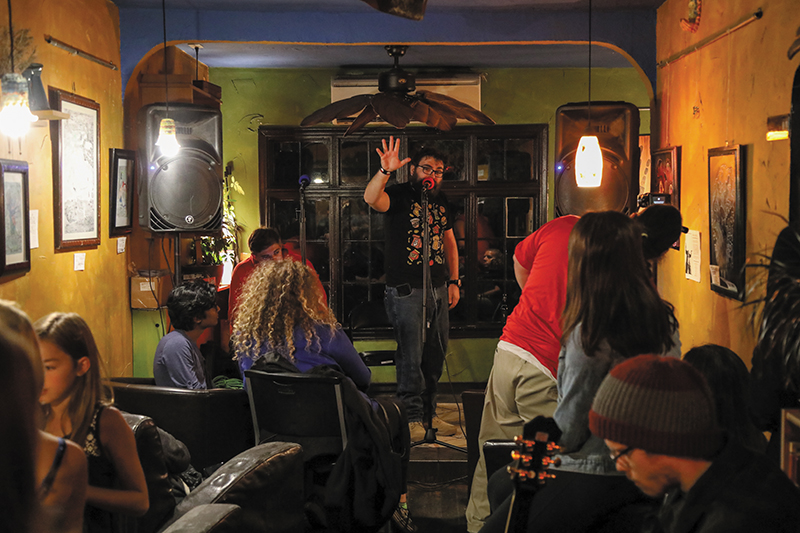 Life’s trials and tribulations can be daunting. They can be even tougher for those who are unsure how to express themselves verbally or for those who are apprehensive to do so. There aren’t many avenues available to teach people how to do it, either. That is where local nonprofit and spoken-word poetry organization Wasatch Wordsmiths come into play. The group, which stages open mic poetry slams throughout Salt Lake, has officially been around since 2013.

“Our goal is to give people a voice and to spread the spoken-word arts throughout the Wasatch Front,” says spoken-word artist and Wasatch Wordsmiths affiliate RJ Walker.

Walker got his start in slam poetry at the open mic sessions at SLC’s Greenhouse Effect (3231 S. 900 E.), which takes place every Sunday at 7:30 p.m. He began years ago by telling jokes but wasn’t feeling the comedy scene in the valley back then. The accepting nature and close-knit vibe at Greenhouse Effect’s open mic inspired him to try something new—allowing him to get some things off of his chest. Now, as a recent finalist in the Individual World Poetry Slam and a familiar face around Wasatch Wordsmiths events, Walker has taken that inspiration to new levels—and is even spreading it to others.

Wasatch Wordsmiths has been working with youth since its inception. It began as a grassroots, organic meeting of the minds in a scene in need of a stage that attracted others. A few who worked as teachers during the day reached out to Walker and friends from Wasatch Wordsmiths, hoping that the poets would come to schools to perform spoken-word poetry in front of their students and that a spark would follow.

“In my English class, we only learned about dead, white poets,” says Walker. “We never, ever, ever saw any living poets come in and read poetry, ever.”

Walker says that bringing slam poets to schools helps to actively engage kids’ interests—especially when introducing street-level poets, whom they can identify with. Walker also claims that teachers rave about the effects that the visits have on individual youth and their classrooms as a whole. Wasatch Wordsmiths conduct workshops for schools all over Salt Lake, recently even expanding into Ogden. Members of the group also facilitate sessions out of state when they travel on tour. The workshops can be ongoing, where teachers want the poets in their classrooms twice a week, while many visits are shorter-term or a one-time deal. According to Walker, teachers are ecstatic over the things they are seeing after listening to and learning about slam poetry.

“They’ve said that they have seen a huge writing improvement among their students, a huge attitude improvement among troubled students and far more student engagement in class by bringing in slam poets,” Walker says with regard to the impact the organization’s work with youth has had.

In fact, several of the up-and-coming poets creating buzz in the Salt Lake scene and beyond were once kids in the classrooms that Walker visited to present poetry and teach young people how to effectively use it as a device to promote personal growth. Walker notes Jose Soto, a young man who attended Copper Hills High School, and Dorothy McGinnis, a former student from Skyline High School: poets who had been impacted by the workshops and poems he had delivered. McGinnis is now the Vice President of Wasatch Wordsmiths and also recently competed in the Individual World Poetry Slam with Walker. Soto’s work has been shared by two of the largest distributors of slam poetry in America, Button Poetry and Right About Now.

Salt Lake’s youth poetry scene is growing due in large part to the fact that the adult scene is growing. That youth scene is growing in an extremely positive direction because of people like Walker and the teachers who bring him into their curriculum. They are providing youth with a platform to speak and the tools to do it in a way that spreads progress.

Walker one day hopes to have a youth scene as prolific as Denver’s, though he is quite aware that Salt Lake is different, with its own unique challenges and obstacles that make the poetry all the more brilliant and beautiful. Denver has large, organized youth poetry groups and the city has taken lyrics from the poems their youth have written and used them on the sides of busses. Walker knows that Salt Lake isn’t there yet but that the potential is.

“We have to dance around a lot of the topics kids want to talk about, but we are succeeding in every step we take anyway, in allowing these kids to express themselves safely,” Walker says. “That is why I think Salt Lake City is special. We aren’t Denver; we’re Salt Lake City. We have to be twice as loud here.”

Editor’s note: Since the publication of this article, Walker’s association with Wasatch Wordsmiths has changed. He is no longer a Slam Master nor a board member and is now focusing more on his volunteer work related to the youth poetry scene. Portions of the article have been altered to reflect these changes.