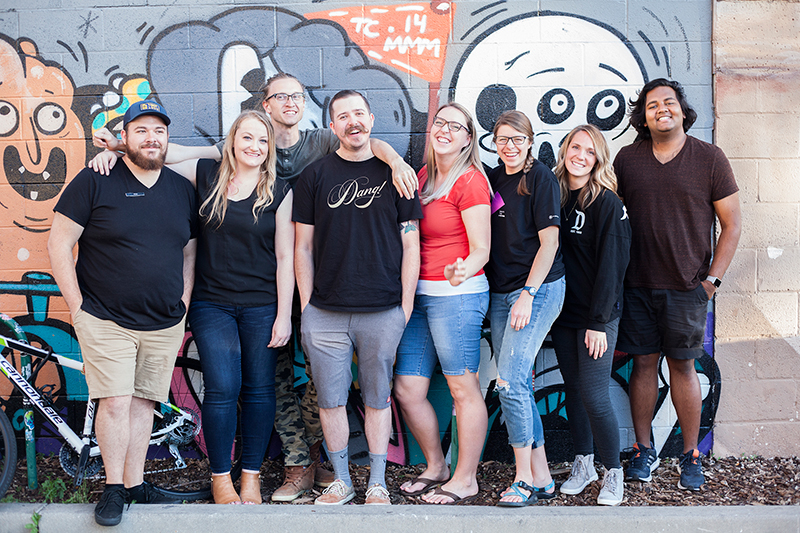 The Salt Lake City Lettering Club: A Community for Communication

Twelve people sit at the longest table in the Downtown Even Stevens Sandwiches, each one telling a story or making a joke with a pen in their hand. The paper that’s rolled across the table is stained with rings from drinks and sprinkled with crumbs from chips and sandwiches, but the colorful variety of words pop from underneath. They share pens, laughs, thoughts and ideas. As my eyes wander across the table, I notice that those attending all have a project. Whether it’s getting the perfect font or writing an entry in a journal, the elaborately illustrated words jump off the paper in hues of reds, blues and yellows. The Salt Lake City Lettering Club is a resource for lettering artists and newcomers alike to enhance their craft and create a community of like-minded people within the art scene. Since the crisp, calligraphy-inspired art of hand lettering gained a lot of popularity from Instagram and Pinterest, Becca Clason and Danelle Cheney have been working since 2014 to create and maintain this encouraging workspace to expose more people to the art of beautiful penmanship.

It all started when Clason caught wind of a lettering club that started up in Vancouver in 2014. “Riley Cran brought a lettering club to his city, where they would meet at bars and sketch and create art together,” Clason says. “I wanted this to exist in Salt Lake City. So, I formed my own version of it.” It was apparent to Clason that the lettering scene in Salt Lake was spread out and anonymous when it didn’t have to be that way. By creating a club with biweekly meetups and by curating interesting workshops, Clason brought together a whole new community of artists who could grow and improve their craft with each other. “I started by emailing a small group of people in the Salt Lake area who I knew did lettering professionally or as a hobby, and I explained what I was going to be starting and when the first event would take place,” she says. “I did some research to figure out a location where we could hold the events and reserved a room in the Salt Lake Public Library in downtown SLC, which is where I held most of the events that first year. I did all of this on my own for about a year before I turned everything over to Danelle.” Since Clason was having a baby and moving away from Salt Lake to live in a cabin up at Bear Lake, she knew that she would have to rely on someone else to keep the lettering club alive in the city.

“I didn’t realize this until a couple years ago, but I noticed that when I was in school, I was taking really fancy notes,” Cheney says. “I didn’t realize that people could make a career out of this, and it took me a long time to understand that.” When Cheney found out that there was a lettering club going on in Salt Lake City upon her return from living out of state a year in 2015, she knew that she had to go. “I was always so fascinated by typography because it’s the visual form of how we communicate,” Cheney says. “You can write the letter A in so many different ways and still recognize it as a letter A, and that’s so fascinating to me.” It was obvious to Clason that Cheney was a great contender for keeping up the lettering club while she was away.

The club offers two different settings that are open to the public: casual meet-ups and structured workshops. “The casual meetups are usually at Even Stevens Downtown, and it’s a place where you can hang out, work on a project or doodle, have some dinner and just enjoy yourself,” says Cheney. “The workshops happen every other month, and those are more focused around teaching a skill. Lessons can range anywhere from chalk lettering to book binding. Though there’s a core group of regulars that attend everything, the lettering club is open for everyone who is interested.” Any skill level is welcome. Even if someone isn’t a lettering artist, they can come hang out and draw on the table. “We encourage anyone to get involved and ask questions. Share a pen. Share techniques,” says Cheney. Every event, casual meet-up and structured workshop alike, is geared at a beginner level. Anyone can jump in at anytime without having to worry about not having the skill set to work alongside everyone else. “We have people come in and work on their iPads and computers as well as with pen and paper or watercolors,” says Cheney. “It’s very open and accommodating for everyone.”

Ever since 2014, Clason and Cheney have been working diligently to bring the creative lettering minds of Salt Lake a space where anyone is welcome. By creating an environment to socialize, draw and create, they’ve opened the doors for growing artists and those who simply want to learn a new skill. Every other Thursday, they’ll meet up at Even Stevens Sandwiches Downtown, and their door is always open for the curious.

To get involved, visit Salt Lake Lettering Club’s Instagram: @saltlakeletteringclub. Any workshop events can be found by following the link to their Eventbrite page in the description.