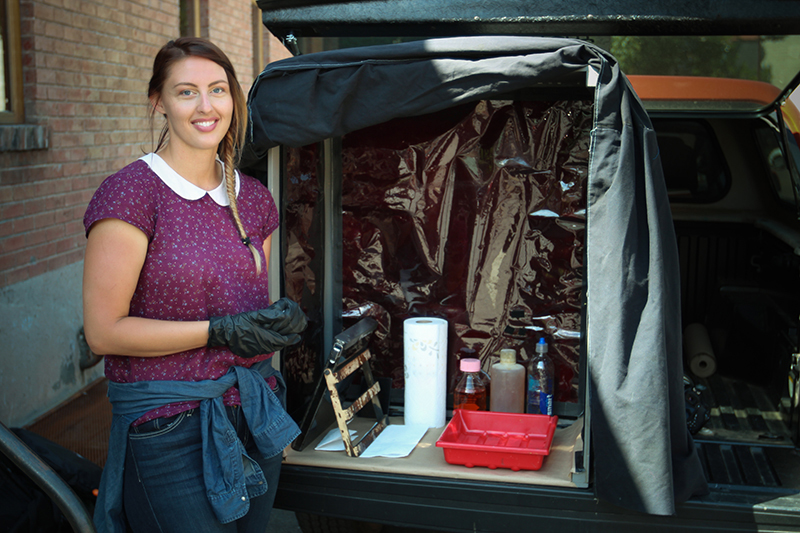 The 19th century tintype photograph has evolved into a modern art form, one that ceaselessly captivates Silver Still Image’s Sylvia Weston. After studying at Utah State University, Weston moved to New York City and worked as a photographer’s assistant and at the Penumbra Foundation. When she took a tintype workshop from photographer Joni Sternbach in 2012, she was hooked, and since last August, she’s dedicated herself to her craft. “It’s rewarding to know that you can make a photo from scratch with time, practice and an understanding of the camera and chemistry,” says Weston, “to slow down and make something with your hands.”

Weston moved back to Utah to cut costs and be close to home—she grew up on a Laketown cattle ranch—and to continue documenting her family’s lifestyle, a theme that resonates throughout her work. This summer, Weston has focused most of her efforts on her traveling photo booth, which is based out of the back of her red-orange truck, and has taken her craft to Sasquatch! Music Festival and Levitation 2016. The latter was canceled due to inclement weather, but Weston was able to set up her booth at an Austin bar—her first customer was none other than Anton Newcombe of The Brian Jonestown Massacre.

Through her photo booth, Weston’s subjects encounter a completely new experience in having their portrait taken. “It’s an important exchange because it’s a slower process, and it’s a unique experience in that I don’t know how the end photograph will look,” says Weston, who takes time to explain the procedure to her subjects. With tintypes, the photographer is producing a handmade piece of film, part of a labor-intensive, one-shot wet plate collodion photographic process. “When we see the image,” says Weston, “we’re both seeing it for the first time.”

Weston’s tintypes are at once transfixing, intimate and evocative. This year will be Weston’s first at the Craft Lake City DIY Fest—she’s looking forward to bringing her craft throughout Utah and putting down more roots here. Watch for her prints or have your own tintype portrait experience at the festival through her traveling photo booth.