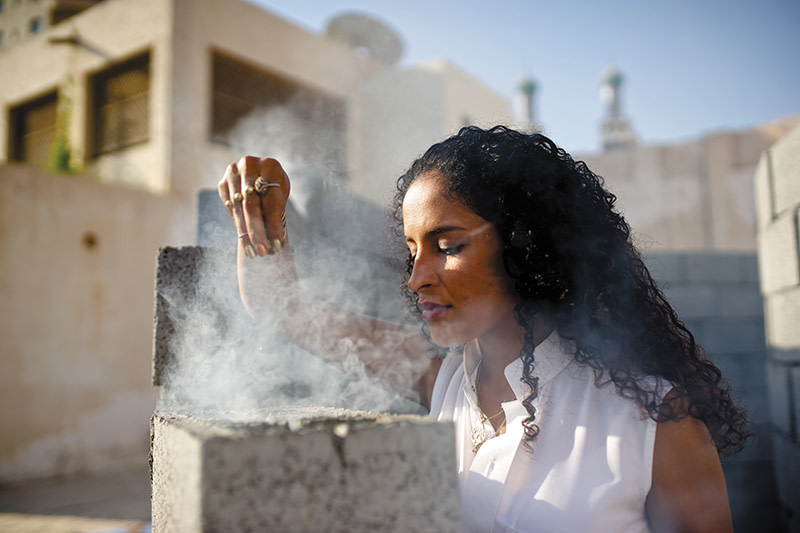 In a State of Play: Balqis Al Rashed

Through Jan. 6, the Utah Museum of Contemporary Art (UMOCA) is temporary home to the largest U.S. collection of Saudi Arabian contemporary art to date. In partnership with the King Abdulaziz Center for World Culture and CULTURUNNERS, UMOCA’s Cities of Conviction brings together over 15 artists whose works delve into human, cultural and sociopolitical issues that resonate for both Utah and Saudi Arabia, from sacred sites to natural resources.

One of these artists is the multidisciplinary and conceptual Balqis Al Rashed, who lived in Salt Lake City for several weeks as UMOCA‘s first international artist-in-residence, creating a brand-new work for the Cities of Conviction exhibition. The completed piece, a laborious installation titled In Progress, is now on view in UMOCA‘s Main Gallery. The experiential work features a series of long, black cotton panels, hanging to create a passageway of sorts. On each panel are paintings made of salt-water and salt-crystal—the bottom of the panels dip into small vats of salt water, so that the panels will continue to grow and develop throughout the duration of the exhibition, taking on lives of their own. The ground beneath the cloth panels is entirely covered with small salt crystals, lending to a rocky, physical experience for viewers, as they are invited to step into and walk throughout the installation—without shoes on. Al Rashed’s work developed from her examination into the geographical and sociocultural ties between Saudi Arabia and Salt Lake City. It also beautifully delves into the many meanings of salt: something we need to survive but that can kill us; something that is within our bodies and also in the world around us; to be worth one’s salt, or to take with a grain of salt; grit, sweat, tears.

While Al Rashed’s work can vary drastically in style and medium, much of her practice revolves around a sense of play, as well as an investigation into the multiple meanings that come with certain images and concepts. Al Rashed is also an impressive hoop artist, and her 2014 film, A State of Play, depicts the artist in a niqab, spinning and twirling. “When I first began hooping, I discovered something powerful in the circular and rhythmic motion,” says Al Rashed. “It reminds me of the twirling dervish dance, the rotation of the earth and the planets, the spiralling DNA structure and the tawaf in Mecca. … My choice to combine a plastic child’s toy, which represents innocence and play, with the niqab, [which] is regarded as the most defining visual representation of womanhood in Saudi Arabia and has always been in the center of global controversy, gave this static representation a new kind of movement.” Rather than challenging the garment itself, Al Rashed questions the niqab’s constructed, imposed and “hijacked” meanings: “How can a black piece of garment restrict and allow, empower and oppress, protect and expose, all at once?”

This type of curiosity and dialogue informs almost all of Al Rashed’s practice. “I work intuitively,” says Al Rashed. “I enjoy going into projects just like a child would play—with complete wonder and freedom.” She cites Once, we fell from the sky and landed in Babel, a large, site-specific monument from her 2015 residency at the Sharjah Art Foundation. The installation centers on a spiral wall of concrete blocks, surrounded by sprawling, kaleidoscopic tile. The labor-intensive work materializes a city and the dichotomies in its beliefs, practices and systems. Al Rashed transforms and blurs those divisions—“modernity and the past,” “material and immaterial” and the like—into a sensory experience. “There was something special about that artwork, since [only I was] able to fully grasp its power and meaning through its inception to experiencing it myself,” says Al Rashed—the work was “meant to be lived, felt, smelled, touched and seen.”

Born in Riyadh, Saudi Arabia, and raised in Beirut, Lebanon, for 16 years, Al Rashed translates her lived experience into works that examine personal and collective identity. The artist/designer moved to Beirut right after the Lebanese Civil War, when Lebanon “was suffering from 25 years of sectarian tension,” says Al Rashed. “Being raised in such a context was certainly eye-opening to concepts of belonging, identity and the differences we create to give meaning and significance to the collective group and the self.” Such contrast and contradiction of national and cultural identity left Al Rashed, as a Saudi woman raised in Lebanon, feeling out of place, stuck in between or on the sidelines of varying existences. She constantly found herself chameleonic, integrating, adapting, rejecting or touring through different perspectives. “As a third-culture kid, being schooled in a Catholic American system, existing in a religiously and politically diverse society, and originating from a conservative culture taught me that I could no longer really belong anywhere or to anything that doesn’t reflect my own individual experiences,” says Al Rashed. “Instead, I [opted] to integrate my own experiences, growth and knowledge … That shift in perception was a significant turning point for me as a person and as an artist.”

Engaging with Salt Lake City’s landscape and community as UMOCA’s first international artist-in-residence presented a new context within which Al Rashed could create, learn and expand. It’s been a place with which she could share, from creating a new work for UMOCA to attending a showing of the Book of Mormon at the Eccles Theater to wading through the Great Salt Lake. These interactions with the world inform Al Rashed’s continual self-discovery, and they also lend a sense of vulnerability to her art. “It’s freeing to be able to express myself in such an intimate way,” says Al Rashed. “What drew me most to [performance art] is how intimate it is as an expression, to be fully present in a reincarnated moment or an emotional state that is able to expand and transform our perception of reality.”

While sharing herself in her art and on social media (@balqis_alrashed) does sometimes make Al Rashed feel exposed, it’s also lent her some immense exposure. Al Rashed recently became a Nike global ambassador, twirling and hypnotizing with a chrome-colored hula hoop. “It’s an honor to be given a platform to empower and inspire women from my region to realize their potential as creative and powerful beings,” says Al Rashed. She notes the potential for positive change through transforming perceptions—creating a movement by creating movement. “As an Arab woman, I was conditioned from an early stage to believe less of myself, that I am not worthy of believing that I can, and that I will,” she says. Nike’s “Believe in more” campaign resonated profoundly for Al Rashed, and she plans to convey that meaning widely. “[‘Believe in more’] means to give myself permission to play, experience joy, expansion, connection,” she says. “It means growth … believing in myself and all the possibilities that I can create.”

Stay tuned with Al Rashed and the UMOCA exhibition at balqisalrashed.com and utahmoca.org.

Editor’s Note: This version has been updated from the print version of this piece, which incorrectly stated the duration of Al Rashed’s UMOCA residency as well as the work that she has on show at UMOCA’s Cities of Conviction.