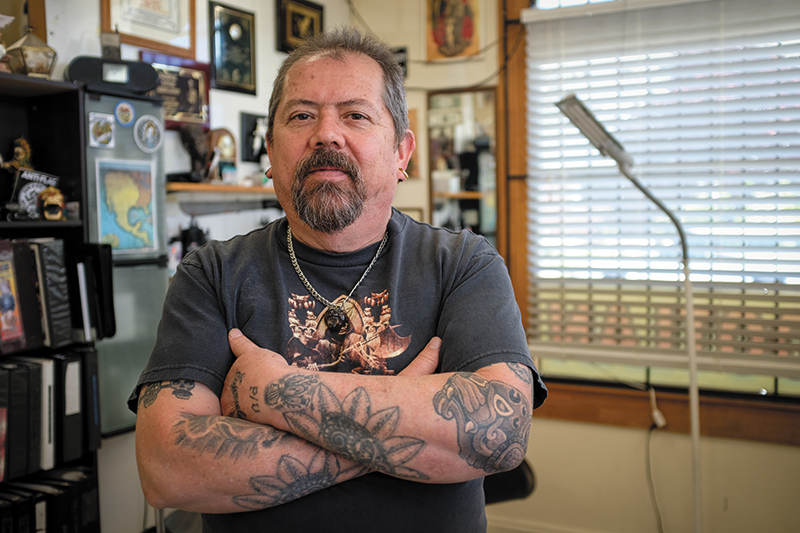 Tattooing Now and Then: Apprenticeships, Digital Media and Craftsmanship in a Fast-Moving World

The art of tattooing has seen a shift in the past two decades. With reality shows and a cultural change, getting inked no longer principally attracts bikers or members of countercultures, but a large swath of diverse consumers. This shift has flooded tattoo shops worldwide with people wanting to decorate their bodies and tell a story of who they are. This has spawned more tattooers who supply the demand. Along with these new waves of artists, there’s a vast pool of immediately available tattoo imagery and media via the internet. Three local tattoo artists and shop owners living and working in Salt Lake—with longstanding positions in local tattooing and hardy skills in their trade—respond to these Information Age changes in their own ways while they steward new generations of tattooing apprentices.

Sergio Reynoso, owner of Tattootlan on 1860 S. Main St., sits in his small shop, which is covered in skulls, Santa Maria icons, crucifixes and other relics of his Mexican heritage—a core style of tattooing in which Tattootlan specializes, though they can ink any kind of style. Reynoso began tattooing at the age of 12 in 1976 while in Mexico, using tools he built and taught himself how to use. “Back in the days, there were no suppliers,” Reynoso says, “so you had to improvise your tools.” Reynoso came to Salt Lake City in the mid-1990s to enter the tattoo scene. He got his start working at ASI Tattoo & Artistic Skin Illustrations, one of the oldest shops in Salt Lake City, and eventually left to open Tattootlan in 2000.

Since then, Reynoso has seen a shift in tattooing as being more culturally accepted. “Back in the day, people used to think only lowlifes were getting tattoos,” Reynoso says. “Right now, I tattoo nurses, teachers, cops … a lot more types of people.” With this shift, Reynoso fears that certain aspects of the art are dying and hurting tattooing as a whole. When he was learning to become a tattoo artist, Reynoso says that he was guided with a hands-on approach and had to learn every aspect of tattooing, from building machines and needles to drawing designs. With the high level of saturation of people wanting to learn and apprentice, Reynoso believes that tattoo artists may not be given the time and the guidance from their contemporaries that they need and are rushed before they have time to hone their craft.

Before, Reynoso made his tattoo machines by building electrical wiring, creating sets of needles and welding specific pieces of machinery together. Now, with the click of a mouse, aspiring tattoo artists can buy a brand-new machine, with little to no knowledge of how it works or the proper form and etiquette that comes with being a practiced tattoo artist. “What used to be a really nice kind of trade between people who are friends has gotten watered down,” Reynoso says. “I think some things have been lost.” He keeps what he learned from tattooing close to his heart, but also has realized that, to stay relevant, he needs to update his knowledge and continually strive to learn new techniques and embrace the technological world and what it means for tattooing. Reynoso has joined the internet tattooing community, posting many DIY tattoo tutorials on everything from machine-building to pedal-wiring. Reynoso hopes that in passing on his “old-school” knowledge on YouTube (called TATTOOTLAN), he can also continue to learn about tattooing from new generations of tattoo artists. “You never stop learning. I am still an apprentice,” Reynoso says. “I am still learning every day, and I know I will keep doing that in the future when things change more.”

GoodTimes Tattoo on 1249 S. 900 East has an open, welcoming vibe with artwork of many different styles covering the walls. The central area of the shop resembles a bullpen, sporting an open layout with waist-high walls separating each tattoo area. Colby Burleson opened GoodTimes in June of 1999. Burleson, a Utah native, did his apprenticeship in Salt Lake City at Susie M’s, then went on to open GoodTimes three years after. Like Reynoso, Burleson saw a significant shift in tattooing and tattoo culture shortly after he opened his shop. “Large-scale [and visible] tattoo work was not nearly as common as it is today,” Burleson says. He attributes part of the change to the increase in information that became available after the advent of the internet. Though Burleson recognized the high saturation of tattooing in today’s culture, he says that all of the shifts are not bad. “I used to have to go to a dingy magazine shop to get a tattooing magazine once a month,” Burleson says. “And even then, some of the tattoos in the magazine weren’t great. Now I can open my phone and see a thousand sick tattoos right this second.” Burleson says that the availability of information has changed the amount of time it takes for someone who is learning to tattoo to begin to create quality work. “When I was taught, it took more time,” Burleson says. “It was like, ‘Watch me tattoo, here is a tattoo gun, now go do it yourself.’ Start an apprenticeship now, and these guys are light-years ahead of where we started.” In many ways, Burleson has embraced the changing climate of tattooing—his shop is equipped with contemporary approaches for tattoo design and drafting. Artists bustle in and out of the backroom of his shop, using printers and iPads to quickly create new work and ideas. From wall to wall in the back room of GoodTimes, artists have posted beautiful pieces of intricate art, which Burleson says were almost unheard of nearly 20 years ago.

Rich D, from Big Deluxe Tattoo on 662 S. State St. and 730 S. State St., has an old-school view of apprenticeships and what it takes to become a tattoo artist. Big Deluxe is a well-established shop that has

been open since 1998. Rich D, who is originally from New Orleans, apprenticed with Don Brouse and wife Sharon Brouse, founders of ASI. Like Burleson and Reynoso, Rich D has watched the shift in tattoo culture happen since his shop has been open. “The pro to that is people aren’t so gun-shy about the negative connotations that used to come with tattooing,” Rich D says. “The negatives to that are also that now there are a lot more tattooers that don’t necessarily go about it in a more traditional manner. These new apprentices, they’re missing a lot. They’re missing the trade of it. You go through a lot of abuse back then—you go through a little bit of abuse now—but it makes you a stronger craftsman and artist.”

Rich D, staying close to his friend and mentor Don and following suit, takes apprenticeships seriously. His apprentices take an extended period to complete their work, from eight to 18 months, and often don’t touch a tattoo gun until months after they start their work. This can be frustrating for some apprentices, especially when they can go to a different tattoo shop and complete their work much earlier, but Rich D says that his style ensures that the people he’s teaching are passionate and learn everything they need to before they start tattooing on their own. “When [new apprentices] take their time and really learn by watching, that sets them up for success when they finally grab a machine,” Rich D says. “When they wait and prove they really want this and can do this, it shows they have a true drive.”

Tattooing is continually growing and changing. With the guidance and legacy of old-school tattooers in Salt Lake City, the ability to find passionate tattoo artists who curate shops with high-quality work is not going away anytime soon. While the art of tattooing may grow and change, Reynoso, Burleson and Rich D are sure to remain as pillars of Salt Lake City tattooing, passing their ideas—traditional and new—to future generations of tattooers.