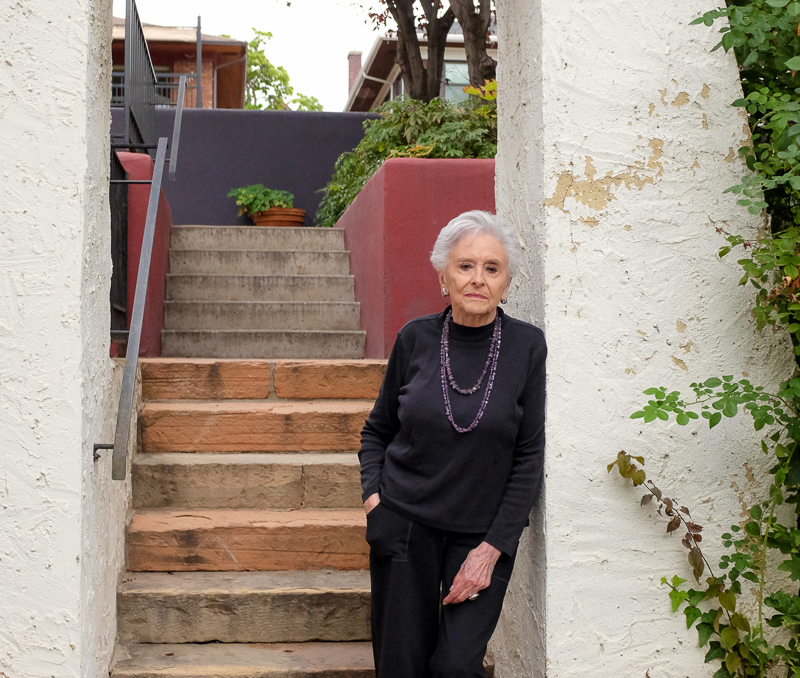 By the 1930s and ‘40s, following an artistic revolution and the peak of the Mural Renaissance, Mexico City had flourished into a thriving meeting-place of culture. An international sense of revolution loomed: Countries and individuals aligned themselves with or against various veins of communism, and McCarthyism inclined several U.S. writers and artists toward Mexico City. Diego Rivera depicted working-class narratives in his massive, incendiary fresco murals, and Frida Kahlo wrote and drew for a leftist broadside—called The Machete—and took part in every march, sometimes in her wheelchair. It was a melding of the arts—of writers and intellectuals, painters and sculptors, actors and architects, poets and playwrights—and in the midst of it all, across from the Palacio de Bellas Artes, was a landmark bookstore and art gallery, a place to see and meet people: Galería Misrachi. This is where longtime–Salt Lake City resident Tina Misrachi Martin grew up, and where much of her recently published book, My Father Alberto Misrachi, takes place. In the small but rich book, Martin gracefully details her memories of growing up in the heart of the prospering Mexican art scene. She speaks fondly of her godmother, Kahlo: “Frida would lie on my mother’s bed and pull up her shirt and tell us to paint over her belly,” she says, “and we did! She’d giggle and giggle. That was Frida’s refuge, her time away from everything.” Martin recalls Leon Trotsky’s “bright blue eyes,” the handsomeness of Rufino Tamayo and traveling to Rome with her close friend, artist Juan Soriano.

Most movingly, Martin remembers her father, Alberto Misrachi. In the foreword, Martin notes, “For many years I have wanted to record some of the wonderful memories I have of a man I deeply respected, loved, and admired, the person who was the major influence in my life: my father, Alberto Misrachi.” The book—which was compiled by Susan Vogel and edited by Joel Hancock, both of whom are Martin’s close friends—absolutely shows Martin’s love for her father, detailing his life and times and evenhandedly placing Martin’s many anecdotes within their broader historical, cultural and artistic contexts.

Misrachi’s most remarkable quality was his steadfastness, which brought him from the increasingly unstable Ottoman Empire to Mexico City. There, Misrachi opened up a business, eventually married Martin’s mother, Anita, and brought all of his and her family members overseas to Mexico. He became a well-respected and influential figure amongst various communities—artistic, intellectual, Sephardic Jewish—and, with his seemingly unwavering sense of principle, was often looked up to as a leader. There’s a striking sense of openness to both Alberto and Anita, considering their relationships with some of the most progressive—and even radical—ideas and artists of the time. “I so admired my father,” Martin says. “He was a mover … always in the background, but always there, making things happen.” With her father’s standing, Martin’s upbringing was steeped in the arts and surrounded by dignitaries: Misrachi came to represent such esteemed artists as Rivera and José Clemente Orozco, frequently brought home the likes of art critic Walter Pach for dinner, and personally connected Trotsky with Mexico’s then-president, Lázaro Cárdenas, to seek asylum.

Beyond detailing her father’s extraordinary accomplishments and prompting several double takes from readers with her casual name-dropping, many of Martin’s most profound insights are in her memories of Kahlo. Martin is often asked why her father never represented Kahlo, whose posthumous rise to fame arrived hand-in-hand with feminism and neomexicanismo (a mid-’80s Mexican art movement distinguished by a somewhat surreal, almost kitsch style that allegorized various aspects of Mexican culture). Back then, though, Kahlo simply wasn’t famous yet. “At the time, Frida just painted whimsically,” says Martin. “Whenever we’d go to visit, Frida would be in her bed with all of her paints and an easel. We’d sit and watch her: She had a four-poster bed with a mirror on top—that’s how she created her self-portraits.”

It wasn’t until André Breton discovered Frida and declared her a surrealist that she became better known, says Martin, “but she was always surprised, always self-effacing. She never seemed to believe in her own work.” In the midst of her volatile marriage with Rivera and her various affairs and relationships, Kahlo tends to be rendered as a revolutionary yet self-disparaging artist, a passionate but anguished woman and lover. With Martin, readers catch a gentle glimpse Kahlo’s motherly side—the side that adored children, that laughed and played with her niñas, niñas. “I think that my two sisters and I, for Frida, were the children that she could never have,” Martin says.

Currently on exhibition at the Museo de Arte Moderno in Mexico City, next to the instantly recognizable “Los Dos Fridas,” is Lola Álvarez Bravo’s black-and-white, 16-mm short film, Frida Kahlo y Tina Misrachi. There, a young Tina plays Kahlo’s daughter. Martin doesn’t bring this up in My Father Alberto Misrachi, though. Her life is remarkable in its own right, but Martin keeps herself in the background—the same way, it seems, that Alberto would—focusing mostly on her father, on Diego and Frida, on how art and politics often went conjointly during the 1930s and ’40s. Martin doesn’t mention how close she was with the younger generation of artists—“Juan [Soriano] and I would go to parties and sit together and be very critical of other people,” she says, grinning—and doesn’t elaborate on moving to the U.S. to become an actress. (According to Hancock, renowned playwright Emilio Carballido once exclaimed, “Tina Misrachi?! She was destined to be the first lady of the Mexican stage!”)

Like her father, Martin has continued to support the arts, helping to found Artes de México en Utah, hosting visiting artists in her home and sharing stories to keep that era of Mexican art alive. My Father Alberto Misrachi is not for sale, though. For Martin, putting together the book was an act of love. It’s a tribute to her father, Alberto Misrachi—a man at the center of the art world in Mexico City, a man who she so deeply admired—and a gift for her children, so that they might know him.