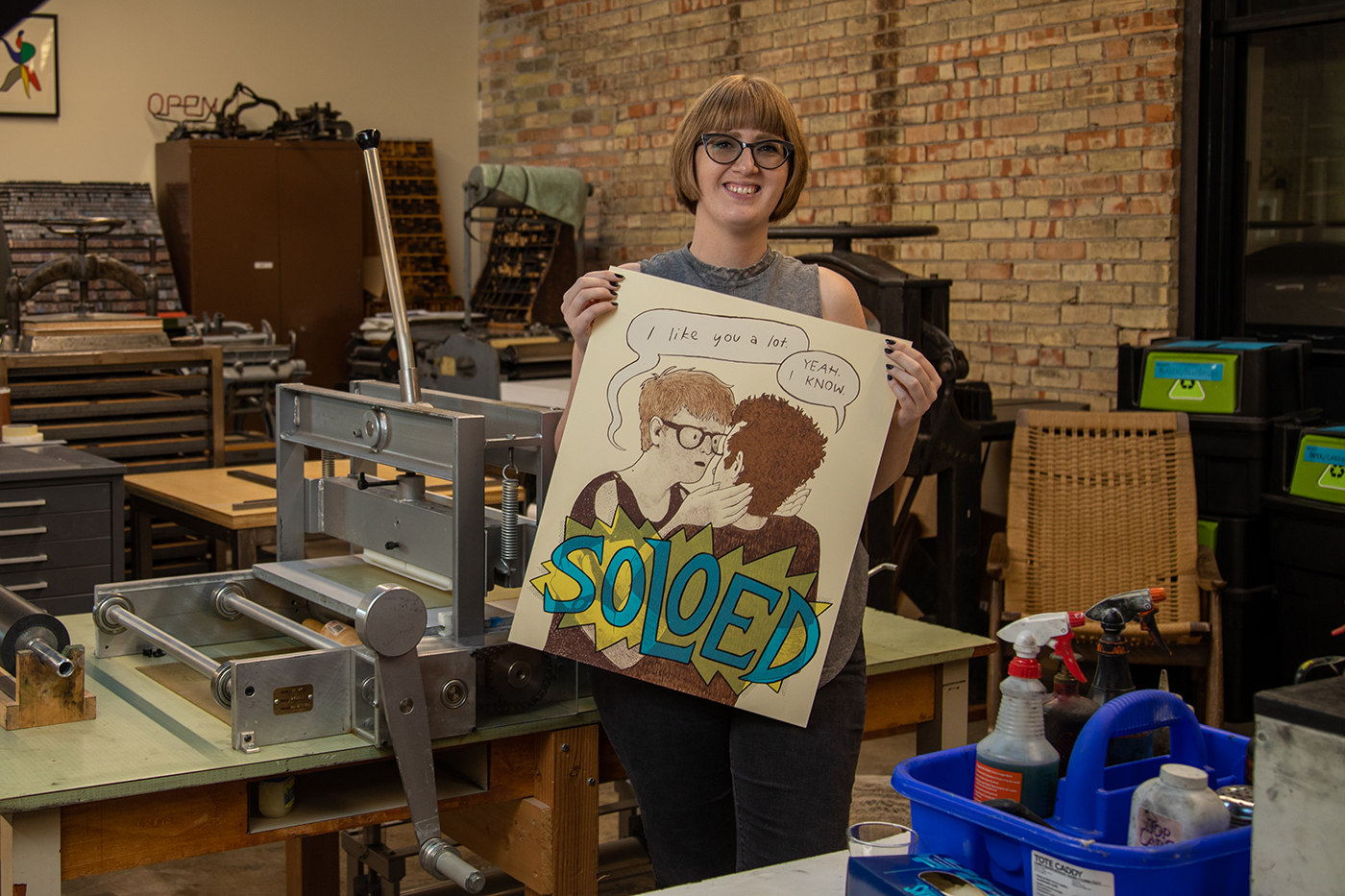 Trishelle Jeffery prefers to skip niceties and awkward silences and leap right into the deep end of her comic art. Her work takes a frank and personal look into mental health, body image and moving through the world as a woman. Through these candid narratives, Jeffery allows opportunities for self-reflection and sincere connection. Jeffery is a Salt Lake City native who attended Snow College and the University of Utah before obtaining her MFA from Wichita State University in 2018. Her collection Best Breasts in the West is currently featured at UMOCA and will be on display through March 21, 2020. Jeffery’s work was juried into the upcoming 35 x 35 show presented by 15 Bytes, which highlights the up-and-coming generation of Utah artists in March and April.

The comic medium comes naturally to Jeffery, who says, “I’ve been drawing comics as long as I’ve been drawing anything.” Whether multi-panel stories or single-frame snapshots, Jeffery’s pieces capture an insightful, memory-like stream of consciousness. “As I grew as an artist and started to figure out what I wanted to do, I realized that the things that mattered most to me and were most successful as art pieces were the things that were really personal and autobiographical.” She says, “Comic, as a format, is a good way of doing autobiography.” Making work that is completely transparent has been a rewarding process that reinforces Jeffery’s desire to be in communion with others who may relate to her art.

“Though Jeffery doesn’t consider herself strictly an artist of the American West, she appreciates the fertile ground that exists here for producing poignant pieces.”

Comics may not immediately come to mind when one thinks of contemporary art, but Jeffery’s medium allows for a certain accessibility that challenges outdated concepts of what it means to be displayed in modern gallery spaces. Separating art by genre (e.g., contemporary versus comic) doesn’t seem useful or necessary to Jeffery, who recently hosted a community art show in her home that ranged from seasoned printmakers to first-time showers. “Every exhibition is the same sort of opportunity, whether it’s a tiny group show in someone’s house or a museum show, to give a chance to respond to what you put into the world,” she says. “Anybody who wants to show art in any capacity has the power to democratize it.”

Having the resources to bring her comics to life on a larger physical scale at local exhibits such as UMOCA has been thrilling and affirming for Jeffery. As a member of Saltgrass Printmakers, a printmaking educator at the University of Utah and a participant in various fine art shows and galleries, she is invested in Utah’s artistic landscape, which she describes as beautiful and important. Though Jeffery doesn’t consider herself strictly an artist of the American West, she appreciates the fertile ground that exists here for producing poignant pieces. Jeffery hopes to make this state her long-term creative home and plans to be a part of positive changes to the culture of supporting art, artists and galleries in Utah.

“Jeffery finds a fulfilling balance outside of making art by “educating, curating, and building up others work.”

Jeffery’s definition of success as a Utah comic and printmaker has little to do with fame and fortune. “The goal is to make work,” she says. She strives to have enough conventional success through traditional means that she may uplift her community of fellow creatives. At one point in her career, Jeffery had just graduated her MFA program and moved back to Salt Lake City from Kansas with little idea what her path would be. She found immense support and motivation in her hometown community and was able to establish herself thanks to their help and kindness. Jeffery has intentions to reciprocate this whenever possible. Additionally, she finds a fulfilling balance outside of making art by “educating, curating, and building up others work,” she says.

One channel for cultivating kinship with others is to continue to participate in local gatherings of work, such as the upcoming 35 x 35 show. Put on every three-and-a-half years, the curated collection seeks to embody the “now” of Utah artists. Jeffery is delighted to be juried for a second time and is particularly proud to be displayed among artists she admires and looks up to. The 35 x 35 show will be held at Finch Lane Gallery and reopens March 28 after closure due to COVID-19. Jeffery’s comic art will be one of 35 artists under age 35 featured from a statewide call for entries.

To experience Jeffery’s intimate and inspiring storytelling via comic, visit her work on her website. Go to artistsofutah.org/15bytes for more information about the 35 x 35 show.

Editor’s note: On March 13, SLUG Magazine learned that the 35 x 35 opening reception was canceled due to COVID-19. We’ve updated the show’s visitation dates. UMOCA has also closed through March 27 in light of COVID-19.