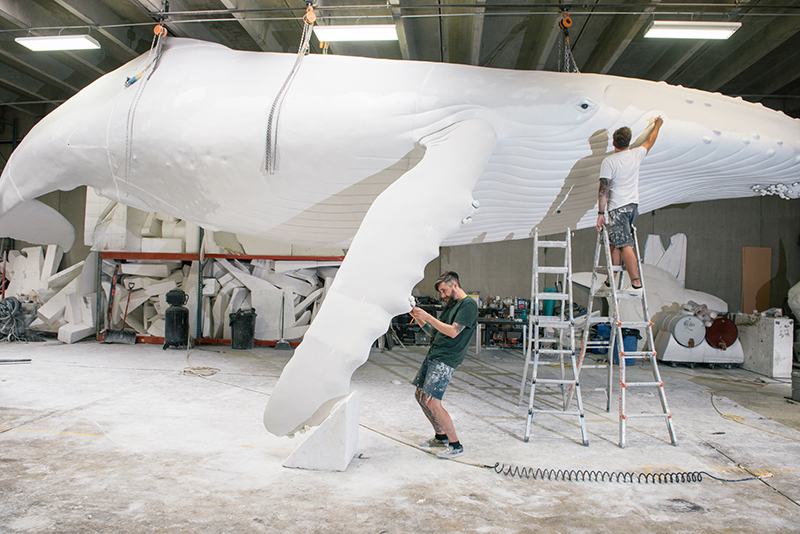 Artist Stephen Kesler has built a name and reputation for himself as a talented sculptor of life-size, emotive wildlife portraits. If you have visited Hogle Zoo or the Loveland Living Planet Aquarium recently, then you have run across his beautiful sculptures of giraffes and whale sharks, respectively. What is somehow even more impressive than the scale, detail and emotion built into these gorgeous artworks is the fact that Kesler has only been sculpting for a mere five years.

Kesler’s exposure to art began at a young age, creating for most of his life in the areas of music and graphic design, thanks to family members like artist Florence Truelson. Up until August 2014, he worked full-time as a graphic designer, creating work for corporate clients—including the famous logo for Wasatch Beers—which paid the bills and satisfied some of his artistic drive. In 2009, Kesler decided to try his hand at sculpture—his vision was inspired by hyperrealist sculptor Ron Muecks’ enormous, expressive sculptures of people, bodies and faces. The passionate connection to the medium was instantaneous. “I fell into design in my early 20s—it was something to make money at [while] doing art, I guess, and it scratched the creative itch,” he says, “but sculpture was something almost immediate when I started. I never stopped. I’ve sculpted every day since I started.” Kesler has recently been able to cut the day job out of the equation and dedicate his life to sculpting full time in his own Salt Lake studio, Tusk Sculpture. His works are unmolded “one-offs,” meaning that each one is a unique creation.

Kesler acknowledges that his rise to success in such a short time was unexpected—and quite an emotional rollercoaster for him as an artist. But the satisfaction he gets as an artist from working with his hands and building something in a 3-D space has been an incredible boon to his life, “more so than any other medium I’ve tried,” he says. “I can’t paint for shit. I drew a lot through high school, but I always had trouble with depth and shadow. With sculpture, I don’t have that. Shadows are created by the natural light, so it feels like I can see a lot easier [when] sculpting than I can in any other form. I guess it came naturally.” Instead of working on a traditional canvas to create atmosphere, Kesler uses the details on his sculptures as well as their placement onsite to connect emotionally with the viewer. His sculptures have mostly been either wildlife or human portraits, some of which have been commissioned by collectors. As a conservationist, Kesler brings his deep love of animals and their primal beauty to his work, and just a glance at his gallery shows why big players like Hogle Zoo have connected with him to create pieces that enhance the atmosphere and experience for thousands of annual visitors.

After almost two decades of working in the 2-D world, Kesler is glad to transition to creative work that gets him away from a computer and allows him to work with his hands. Even though some projects require an insane amount of logistics and creativity—such as his current in-progress work for the Aquarium—Kesler doesn’t view them as negatives. Having an enormous amount of space to work with has, instead, left him feeling much less constricted as an artist. “A lot of it just makes sense to me—fabricating and planning all this large-scale stuff never seems like an impossibility,” he says. “It seems like a welcome challenge, where everything else seems like a task.”

Currently, Tusk Sculpture is winding up the finer details on Kesler’s most massive sculpture to date: mother and calf humpback whales, both built to scale and clocking in at 50 feet long and 20 feet long, respectively. Like his other installations, the whales were painstakingly carved from polystyrene foam and supported by an internal, custom-engineered steel support frame. As of writing, Kesler and his crew are detailing the surface and paint job of both mother and baby and adding hyperrealistic details such as barnacles, also made in-shop. To solve the problem of fitting a literally whale-sized sculpture through the tiny double-doors of the Aquarium, Kesler built the sculptures to be disassembled into several sections, allowing his team to move them in, reassemble them and apply the finishing touches from inside the aquarium space. Once the whales are safe and sound in their new home, Kesler has two more works to finish for them, including a gorgeous giant squid and a sperm whale.

The mother and baby humpback whale sculptures are scheduled to be revealed later this year at the Loveland Living Planet Aquarium. Follow Tusk Sculpture on Instagram (@stephenkesler_tusk) to get peeks of the whales and other in-progress projects, or order your own sculpture work at tusklife.com.