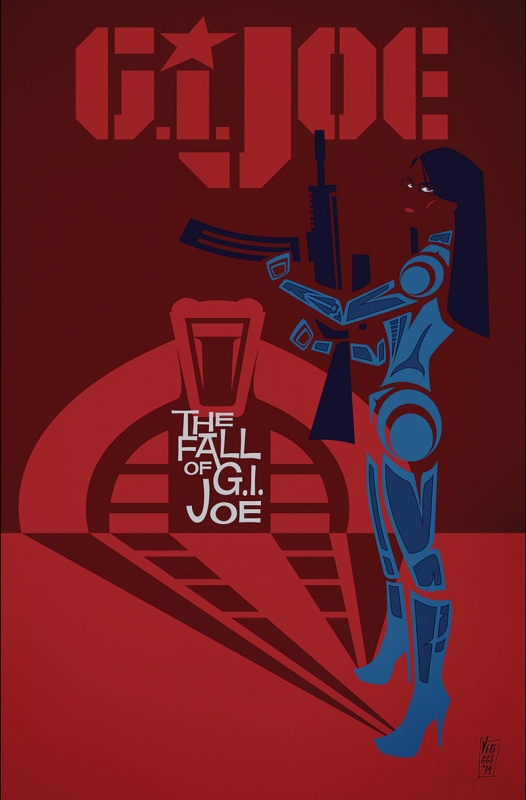 Clive Barker, Mark Miller
BOOM! Studios
Street: 02.24
Next Testament is beyond fantastic. This volume continues to show that this story is more than just thought-provoking horror—it’s deconstructionist art that demands full attention in every panel. Clive Barker, co-creator Mark Miller and artist Haemi Jang work masterfully together in Barker’s first original comic, which proves his writing expertise as a smart and chilling existential author who thrives when untethered to any existing property. Jang’s psychedelic God symbols splice into a dark and brutal reality that cast unsettling shadows on everything once presumed to be true. Barker and Miller present philosophical musings and moral thresholds with seriously world-altering consequences. The core concept of the book provokes a challenge to structuralism, as Wick, the self-proclaimed God, uses his newfound freedom to punish his disappointing creations with the threat of total extinction by torturing the non-believers while collecting an orgy of devout followers. Wick uses his powers to inhabit and transcend Christian biblical postulation, positioning himself as the center of everything while paradoxically declaring to the the masses of an unsuspecting city that “there is no meaning to existence.” Is there? The cliffhanger is a brilliant and violent examination of sex and significance that only the next issues can satisfy. –Taylor Hoffman

The Fade Out, Vol. 1
Ed Brubaker
Image Comics
Street: 03.10
The Fade Out is the perfect Hollywood noir comic from the brilliant team that brought you Fatale and Criminal: Ed Brubaker (Captain America) and Sean Phillips (Hellblazer). Behind the glitz of the famous movie stars are the producers and agents that keep the seedy underbelly of sludge out of public view. A starlet dies before completing a long-anticipated movie, beginning a spiral of conspiracy and cover-ups galore during the Golden Age of film. The typical amount of sex and alcoholism fuel depression and envy behind the scenes and on-screen. Brubaker’s writing style lends itself perfectly to this shady genre—it’s all smoke and distorted perspective. Anyone even remotely invested in the movie business becomes tangled in the ever growing mystery. Phillips’s linework and Elizabeth Breitweiser’s coloring makes the art flow like Oscar-winning cinematography. Characters look so unbelievably real, flaws and all, in their stark surroundings. Black-and-white flashbacks and pops of color contrast the horrors of the war and the glamor of the luxe. I’m afraid to say too much, not that I’m hiding anything, but just trust me. I have it on good word that you don’t want to skip this. –Taylor Hoffman

G.I. Joe Volume 1: The Fall of G.I. Joe
Karen Traviss/Steve Kurth
IDW Comics
Street: 03.04
With the Joes looking at disbanding, what can become of them? It’s no secret that Cobra isn’t defeated, but politicians will be politicians. This book, collecting the first five issues of the The Fall of G.I. Joes, is a great read for those needing a fix of military espionage and action. The political back-and-forth presented in the book is reminiscent of our current political times (although it may be reminiscent of every other political story as well). The art is solidly done, and the colors accurately reflect the mood. I wouldn’t put this book on my top 10 list for color and art, but it is definitely not hard on the eyes. While this may not be a book for every person, anyone who grew up watching G.I. Joe will instantly connect to the story—definitely worth investigating. –Thomas Winkley

The Life After, Vol. 1
Joshua Hale Fialkov and Gabo
Oni Press
Street: 03.17
What happens after death? Things get weird—well, weirder. When Jude realizes that his suicide has him trapped in a repetitive world with the same bureaucratic incompetence as the first, naturally, he teams up with Ernest Hemingway to fight the system. Think Wristcutters with even more disturbing whimsy. The dark humor is not overwrought or even depressing—it’s actually kind of bleakly funny because life and this purgatory are both grotesque and funny in the same way. The entire Life After System is a poorly run democracy with Aloheynu, a bad blobby monster like a Lovecraftian LSP, floating above and “in charge” of the desolate city. It’s philosophical without being preachy, theological without being outrightly religious, and gross without being disgusting. Gabo channels the surrealism more and more with each issue while his layouts continuously challenge what we think we’ll see next. One page will show an absolutely gorgeous—though suspiciously desolate and unsettling—landscape, and the next will zoom in so we can see the thorny cannibal space inner-demons approaching the scene. Joshua Hale Fialkov’s (The Bunker) cunning script leaves many delicious breadcrumbs for what lies ahead. –Taylor Hoffman

Revelations
Paul Jenkins
BOOM! Studios
Street: 01.15
Revelations follows a fairly redundant plot: A faithless authority investigates the corruptions and conspiracies of the Catholic Church when its members turn up dead. The more complex route that Paul Jenkins takes, however, poses an interesting question for atheists, agnostics and religious fanatics: Is it more dangerous to lose your faith or to find it? Jenkins fully invests in his main character, Detective Charlie Northern, a chain-smoking “recovering” Catholic, who is focused on only obtaining proof. All other characters are secondary, and little is spent developing or caring for them. Although heavily laden with outright religious images of churches, cardinals and priests, and despite being about a prominent sector of Christian faith, nothing about it actually felt theological in the slightest. There is a definite disconnect between the narrative of Jenkins’ characters and the message that he’s attempting to portray. I would attribute a portion of this to the clashing pencil stylings of Humberto Ramos to the colors done by Leonardo Olea and Edgar Delgado, which only seem to translate in simple, minimalistic panels. I have more to say about the novel’s failings as a religious metaphorical query than I do on its actual content. Since this is a republication, I was pleased with the additional sketches and covers included, which I feel more appropriately display the combined talents of Ramos, Olea and Delgado. A few are even wallpaper-worthy. I can see Revelations being an excellent discussion starter for those exploring the role of religion in comic books.  –Andrea Silva

The Rocketeer: Complete Adventures Trade Paperback
Dave Stevens
IDW Comics
Street: 03.18
This is a great way to find out how much you love The Rocketeer without spending an arm and a leg. While the ultimate collector will want to hunt down the hard cover, this collection is immediately endearing to the reader. The classic art and incredible story—full of every trope you can imagine—is a great way to relive the adventures of Cliff Secord and his mysterious jet pack. The comics are edgy, entertaining and, not to sound like a broken record, the art is incredible. Whether vying for the love of his free-spirited girlfriend or fighting Nazi spies, Cliff is an incredibly hilarious and lovable character right from the start. This comic is a universal superhero story that doesn’t require any advanced knowledge of a predetermined universe to enjoy every panel. This is a must-have for your collection. –Thomas Winkley

Star Trek: Harlan Ellison’s City On The Edge of Forever
Harlan Ellison, Scott Tipton, David Tipton
IDW Comics
Street: 02.17
The penultimate episode of Season One is a fan favorite and critically acclaimed, yet it bears little resemblance to the actual story. It was one of the most re-revised scripts in Star Trek’s rich history: Harlan Ellison’s original draft was thought to be too long and too expensive to make. Producers worried that it would be boring because most of the script is Kirk and Spock questioning the boundaries of reality with a wall. Overall, the plot and characters were too controversial. Well, 47 years later, Ellison’s vision finally gets the treatment it deserves. It’s all sex, drugs and profound contemplation about the value of life and the constitution of evil. Lieutenant Beckwith is an agent of selfishness who extorts alien cultures by hooking them on “Jewels of Sound,” space-crack. Well, things happen and it’s up to the Enterprise crew to stabilize time by going back to the 1930s. Half the comic is Spock trying to convince Kirk not to have sex with a particular woman—yep, perfect. J.K. Woodward’s phenomenal watercolor art and heavy inking, all by hand, prove those producers right—no CGI could convey the existential terror lurking within the story like this miniseries does. –Taylor Hoffman

Star Trek: Golden Key Archives Volume 3
IDW Comics
Justin Eisinger & Alonso Simon
Street: 03.31
Star Trek is a hard act to follow in any medium, and this collection is a great way to summarize the cheesy sci-fi combined with the imaginative world set forth by its creators. This comic compiles the classic issues from the original days of Star Trek, when Spock and Kirk travelled the galaxy encountering new life. This comic is a great read for fans of the series and a good segue for those looking to see what they missed in Star Trek’s past. The writing is in the same tone as the show, and the newsprint look to the artwork is well-matched. This is not a spot to search for a deep and serious story, but a place to revel in the classic Trek universe and all of its characters. Collectors, prepare your wallets for Warp 8. –Thomas Winkley

Weird Love, Vol. 1: You Know You Want It
Craig Yoe, Clizza Gussoni
IDW Comics
Street: 03.24
Tired of the typical Lois Lane and Lana Lang catfights over Superman? This is a collection of explicitly and extremely Freudian-therapy tales. The influx of romance comics of the ‘40s and ‘50s really highlight the post-war American attitude that no longer had a common enemy for Superman to fight. Instead, readers yearned to see who would win in the battlefield of love, and as the audience grew more mature, the stories got steamier. Soon, there was a flood of the same predictable courting-to-marriage story, but among the boring young-lovers repeats, the weird lurks right behind the peephole. Playing on the second wave Red Scare fears, the reprints of Weird Love include the unexpected gems like “I Fell For A Commie!” in between the pages of Love Secrets. Each one is a ridiculous story about either very ugly or very attractive white guys who love beautiful white gals. It’s a glimpse into the past to read these pages, almost a psychological analysis of how pop-gender stereotypes became solidified in the comic realm. Just see “About Face” for teaching tools for the classic misogynist. It’s definitely a worthwhile collection for the historian and kink. –Taylor Hoffman