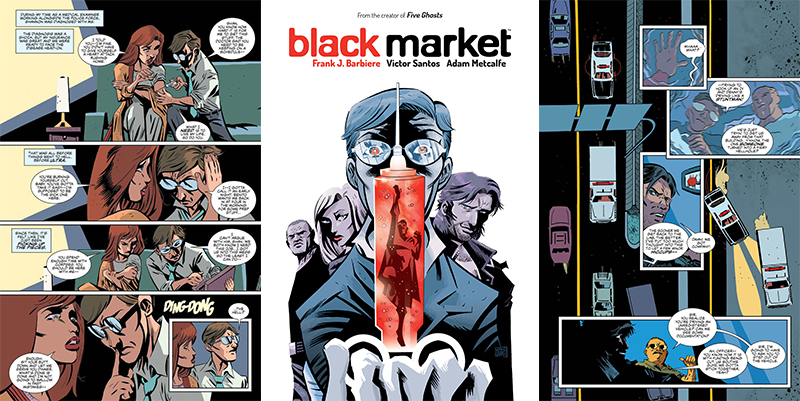 With the rise of graphic novels now in full swing, we have another incredibly creative, dark and fun ride into the world of superheroes. The neat twist with Black Market is it’s about killing the supers, taking all of their blood and possibly curing cancer with it. Essentially, killing supers could essentially save the world. If you’re put off by this, that’s exactly where creator/writer Frank J. Barbiere wants you to be. This is dark, intelligent comedy at its best. Our hero is not a tough guy or a sexy-in-tights guy—he’s just a smart, regular guy who loves his wife more than anything.

In this world where superheroes are entitled douchebags, we have a frustrated populace that’s fed up with being looked down on (figuratively, but also literally, with the flying thing and all). A government-backed bio company has learned they can use the supers’ DNA to cure just about anything and a black market has come about to acquire such goodies. Being that our hero is incredibly smart about the body (being a coroner and all) he is naturally the best man for the job and a team is assembled to track down supers and drain them of all their blood. If you’re wondering why this review is so nonchalant about this gruesome concept, then you’re starting to understand the comedy about this novel. My head buzzed in light of this wonderful humor the entire read.

So if you’re still reading I’ll assume you’re on board with this wicked concept. One unique thing I noticed about Black Market is how much of the humor is not just in the dialogue or pictures themselves, it’s in the panel structure (Though the “Keep Out Private Property” sign that looks like it came out of a child’s sticker book was hilarious in its repetition). Comic books have this advantage over any other medium when it comes to humor. The pacing is like a brilliant Sunday funny strip and the illustrations and colors just add to this.

The story jumps around a bit, but it is completely necessary. No fantastic ending ever came about by showing all your cards at once (Unless it’s a movie with Kenny Rogers). The whole novel felt very Venture Brothers–ish, so if you’re digging some Brock Samson, then the story is just a giddy delight. I also went deep with the concept many times and wondered if I could drain Superman to cure all disease and the answer to that was YES, I would kill the shit out of Superman to cure every disease known to man. I would probably eat Superman just to cure hay fever and stupid Utah allergy season. But what about you? Could you essentially drain all the blood out of LeBron James (Painfully) to cure something? Do superheroes without powers have a leg up in this scenario (Sequel, hint hint)? Do we deep down have it in for people that are naturally, scientifically, in every way better than us?

I guess that’s why it’s just better we read about it and you should definitely read Black Market if you want to see what happens. Both thumps way up, up and away!