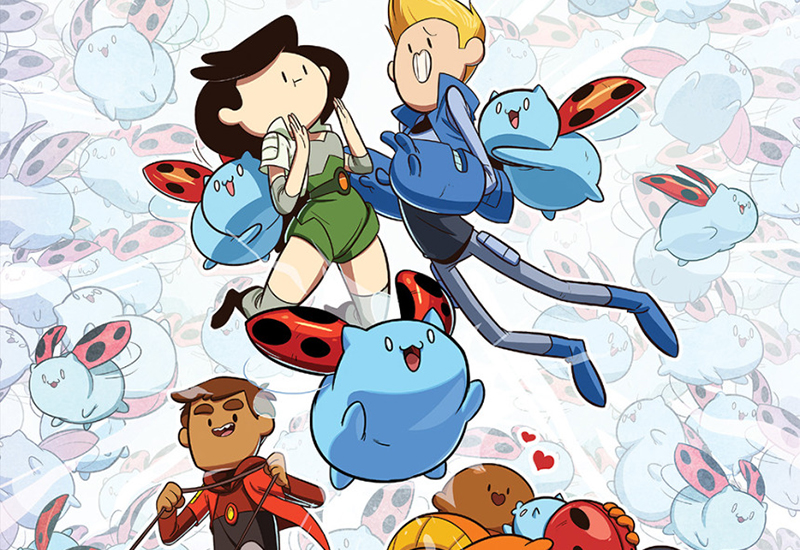 In this volume of Bravest Warriors they crash land on a tropical island, butter-skate their way into millions of people’s hearts, ride a space worm through the galaxy and crash a party of talking hamsters. Yes, this graphic novel is as crazy as it sounds. If you are a fellow Adventure Time lover like I am, then you will feel right at home with Bravest Warriors. Not only does it feature the same artists—Mike Holmes and Ryan Pequin—it’s also written by Joey Comeau. Bravest Warriors is basically a more kid-friendly version of Adventure Time. It doesn’t feature the hilarious adult jokes that Adventure Time seems to cleverly hide in both their cartoons and comics, yet it’s just as random and off-the-wall—maybe even more so.

Speaking of off-the-wall, while reading this volume of Bravest Warriors I imagined to myself that this is probably how a person with A.D.D. feels on a daily basis. There are a few main storylines, but there are so many random things that also happen during the story that’s a little distracting. Just as I was getting comfortable with what was going on, it would take me in another direction. It starts off with Impossibear picking gas-powered beans off a tree on their ship, then it ends with them crashed on a remote tropical island with Space Chicken selling tickets to his butter-skating performance. Your attention is constantly being shifted from one idea to another, and with all the randomness thrown, in it’s a little hard to follow.
Also, I feel like this graphic novel has way too many characters. I had a hard time keeping up with each character and felt like I was constantly being introduced to new ones. Granted, I have not read the first four graphic novels before this, but regardless, I still feel like there are too many characters in this book.

I’m not saying that I disliked Bravest Warriors due to its lack of focus and complete randomness; I’m just trying to explain the overall feel of the novel because random humor is not for everyone. As I’ve mentioned, I am a huge Adventure Time fan. I just feel like it’s a much simpler show and graphic novel than Bravest Warriors.

As far as the artwork is concerned, it is clean and colorful, and a little simpler than Adventure Time. I never felt at any point during the graphic novel that there was too much dialogue in any of the cells or pages. Overall, it had a really good balance and the cells were well organized. It is definitely aimed at people of all ages.

This particular issue chronicles season 2 episode 10 of the Bravest Warriors television show “The Parasox Pub.” The title is a reference to the future Chris that the Bravest Warriors run in to while stranded on the tropical island. He uses a “parasox”—a pair of socks that open a space paradox into another dimension—to travel through time. I have personally never watched the television show and am not sure if watching the episode would help me follow the graphic novel better or not. I’m also unsure as to how closely the novel follows the episodes, but I feel like it wouldn’t make much sense for the creators of the novel to copy the episode, as the people who read the novels probably watch the show as well.

I feel like Bravest Warriors: Volume 5 would be a little hard to jump into at this point in the series, but it could be done. It makes a few references to previous comics (and kindly points you to the exact volume) that you wouldn’t understand, but you can grasp the general idea. I think that younger kids would enjoy this much more than us old folks, but I still found this graphic novel entertaining. I wouldn’t mind reading the previous four volumes, then coming back to this one just so I could get the references they make and understand the characters more. –Nicole Stephenson