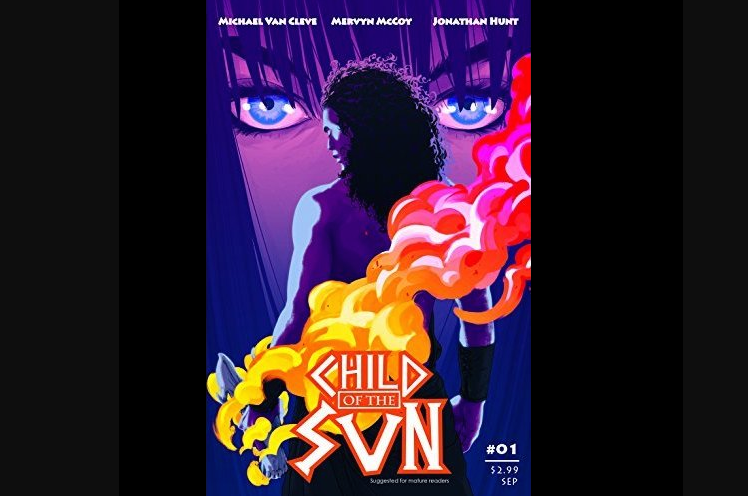 Review: Child of the Sun

Everyone wants to root for the underdog. In an era of mass-produced food, homes and even entertainment, there’s automatic value in individually crafted, independently produced art. It deserves an open mind, welcoming consideration and more than a little slack if it isn’t as slick as its corporate peers. However, one must also be honest with themselves and be able to confidently say “yes” to a simple question: “Am I enjoying this?” For all its raw passion, esoteric curiosity and occasionally stunning art, I’m afraid I can’t say I enjoyed Child of the Sun by Michael Van Cleve. Just as The Perspective Essays would have benefited from a more academic method of sourcing, Child needs some of that Hollywood professionalism to keep me engaged.

One may think they’d enjoy Child of the Sun on the face of its premise alone. Supermen of various cultures—Heracles, Samson, even Gilgamesh—wander the 14th century B.C. Mediterranean getting into hijinks and marital dramas. In this world, the gods are real and such heroes truly are their progeny. If the plot has any central thrust, it’s the typical Biblical superiority of the Hebrew God over baser deities like Dagon or Zeus. Such pagan idols are implied to be mere angels or spirits that mate with women. The Nephilim, those classic subhuman superbeings, even make an appearance. YHWH’s power is embodied in Samson, who slaughters with dubiously righteous outrage, whereas Heracles devolves into alcoholic uselessness and Theseus remains sidelined the entire plot. However, if this premise intrigues you, consider the following.

Most of the building action is about Samson’s courtship of the whore-priest Adriana, and it’s hardly the stuff of adventure as advertised. The turns of their romance pass without preamble or humanizing vulnerability. Both of them are unlikeable—he for his petulant possessiveness and she for her callous disregard. By the time she takes her own life with cartoonish ease and leaves Samson to his bloody revenge, the reader may have very well lost interest. All of this serves as fodder for imperfectly realized action scenes and is mere foreshadowing of the treacherous Delilah. What interest remains is almost certainly squandered when, upon reaching the plot’s climax in Issue 5, Van Cleve chooses to flash backwards for an issue and a half. The resulting narrative structure feels like an exhausting waste of time.

As for those action scenes, well, the core problem is that each issue has a different artist of wildly varying skills. Mervyn McKoy and Eli Powell have real talent, even if McCoy leaves his ocean waves as mere squiggles and Powell has more unnecessary lines than Sean Murphy (Punk Rock Jesus). Nick Sadek and especially Jabari Weathers, I regret to say, fall far short of their peers; Weathers in particularly has the unhappy task of an action scene to which he is not equal. The resulting disparity between the artists’ skills degrades the book as a whole and reminds the reader that for all its strengths, they’re holding a book that may not deserve their attention. It doesn’t help that the review copy was irregularly colored. The first few pages were thick with luxurious blues and reds and then suddenly, most of it was black and white. From then on any random page might be colored, and with consistent excellency, as if to taunt readers with its usual absence. If there were a rhyme or reason regarding which pages were colored, I couldn’t discern. In the end, the art completes the impression the story made: This comic is unfinished.

As a longtime fan of Biblical and Greek myths, I have to imagine I’m as incentivized to love Child of the Sun as anybody could be. So it’s hard for me to recommend it in any capacity when my final reaction was fatigued disinterest. I hope Van Cleve and McCoy coordinate on further projects or even remake Child with consistent art and full color. They both deserve better representation than this.