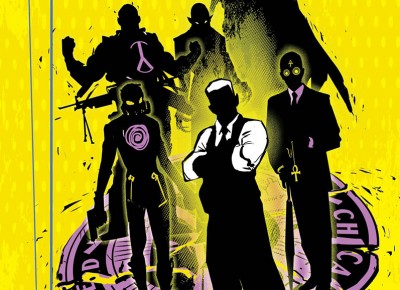 The understated, dark, fantasy characters as normal folks thing has become a genre all on its own. Of course, the standard for this is Watchmen, a book many consider to be the apex of this medium, but series like Fables, and TV shows like Grimm and Teen Titans GO! have made the genre a prevalent part of the space. So when a comic like C.O.W.L. comes along, it becomes incumbent upon the creators to bring something new, something that won’t make the reader say, “So … it’s like Watchmen.” Which is a challenge, especially when reading the story’s plot summary. But C.O.W.L. separates itself right away, and with its razor-sharp writing and unusual art style, it finds its own place in a space that grows ever more populated.

In the series, a group of superheroes have formed a union to help police fight organized crime. But as they are more successful, and the threat becomes less and less apparent, people start to question the validity of a group whose methods are becoming somewhat suspect. As Volume 2 begins, C.O.W.L. (Chicago Organized Workers League) find themselves fighting enemies inside and outside their ranks, as well public perception issues. But when masked baddies start to strike out against powerful people around the city, C.O.W.L. is once again asked to help.

What’s most striking about this story is the succinct manner in which writers Kyle Higgins and Alec Siegel cover so much ground over the five-issue collection, without sacrificing clarity or depth. The second volume continues to probe through the politics and subversion of 1960s Chicago. One of the main threads in Volume 2 follows a telekinetic hero named Radia and her struggle with playing the political game while the rest of her union strikes. Her conundrum is played out in a very real way, in a way we can almost relate to—and is presented with heart and even some humor.

More than, perhaps, any other component of this series as a whole, the art style makes it completely its own animal. We often hear, in cinema and in comics, the phrase “every frame a painting,” but the art of Rod Reis takes this to the next level. Hand-painted with watercolors in a sort of period appropriate pop art, Reis’ work takes C.O.W.L. from very good to great. Not only does it look great, but it also uses the medium in creative ways. At one point in issue nine, someone grabs a letter from another character’s dialogue bubble and uses it as a weapon. I’m not sure I’ve ever seen that before, and it was fucking awesome. This is the sort of thing that makes me believe in comics as a great medium—the way it can, and does, constantly break down the fourth wall.

So yes, these are heroes who are forced out of vigilantism because of public perception. And sure, some of them are inherently good, some have real issues, but most find themselves somewhere in between—asking difficult questions that I think even normal people constantly need to ask. There is no doubt that a lot of what the C.O.W.L. series does can come off as retreading ground, but when you look just beneath the surface, you find a world with diverse and original characters—as well as a story that almost goes out of its way to distance itself from THAT book. The Greater Good, as well as Volume 1, are top-shelf offerings in their own right. With time, and the right amount of exposure, these books should be remembered as important works.