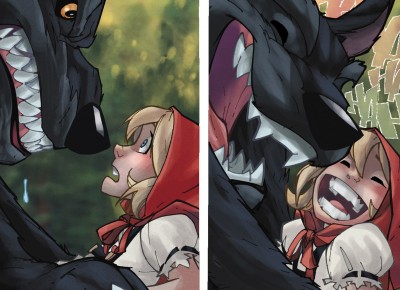 Fairy Quest: Outcasts chronicles the adventure of two main characters, Red and Wolf, who live in a world called Fablewood where all the childhood fairytales you were told exist. All of the characters from the fairytales are expected to stick to their script and live the same story every day. Red (Little Red Riding Hood) and Wolf (The Big Bad Wolf) decide that they want to escape from their stories and make their own script. They visit The Mapmaker who draws them a map to freedom and begin following the yellow brick road that will take them to a place where they can live their stories however they choose.

It’s strange how The Mapmaker is so willing to defy the Think Police and help out complete strangers, which is why Wolf is so suspicious of him, but Red takes no time to doubt his kindness, as she only sees the light at the end of the tunnel. During their journey down the yellow brick road, they’re constantly trying to escape the Think Police and Mr. Grimm—whose job is to keep all the characters in their script. During their adventure, Red and Wolf come across other famous fairy tale characters like Rapunzel—but there’s a twist. Rapunzel is not the sweet and innocent character that her fairy tale depicts her as—instead, she’s a twisted and mean version of Rapunzel, which I loved.

When I started reading this comic I breathed a sigh of dismay, as I assumed that this would just be a mish-mash of fairy tale characters existing in the same world, but I was pleasantly surprised to find that the author wasn’t afraid to deviate from the known character traits and make the plot more interesting. I loved Jenkins’ scary take on Rapunzel and hope that Red and Wolf come across more twisted fairy tale characters. I enjoyed the story overall, and I think that this comic book has a lot of potential to be awesome—as long as they aren’t afraid to change up the characters. There’s even an air of mystery about the story involving Sleeping Beauty, but the unfortunate part is that they only mentioned it for a brief moment and then never brought it up again. I really want to find out what this is all about, or at least get a little more of it in the next issue.

The artwork in Fairy Quest: Outcasts is beautiful and dark but still kid-friendly. The panels were a little confusing on some pages, but that could just be operator error (probably from reading too much manga). Ramos went out of his way to take a decent storyline and really bring it to life with his artwork. About half of the time there was too much dialogue, like they were concerned about keeping every small detail of the writing intact by sacrificing panel space, which is never worth it, in my opinion. The storyline in this comic book wasn’t incredibly gripping, but it has the potential to be, so I will definitely keep reading and see where it takes me. Fairy Quest: Outcasts would be great for anyone who loved the show Once Upon a Time, or really anyone who loves fairytales.