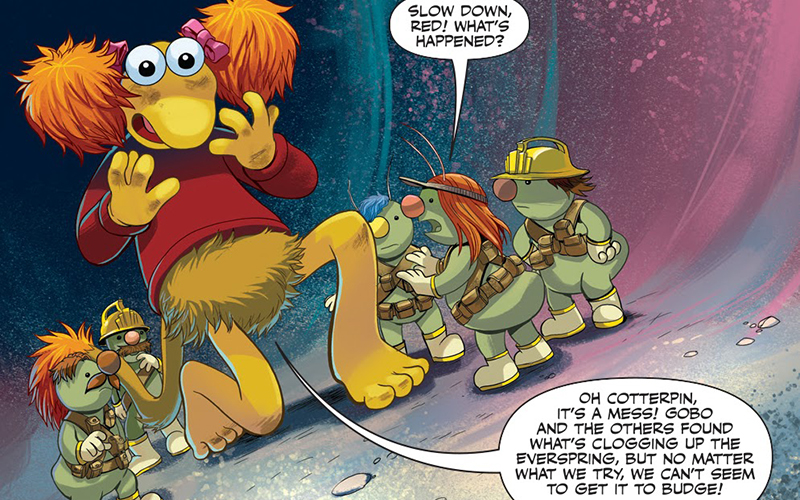 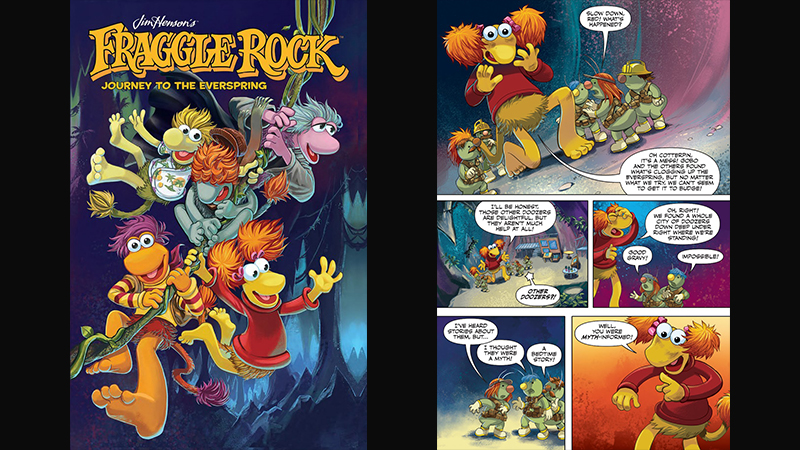 Though we, the 20- and 30-something nerds, have hijacked the medium over the last few decades, comic books, for the most part, have been thought of as primarily for children. Anyone who walks through the skin-centric aisles of Comic Con knows that those days are long gone. Nothing wrong with this—I love a moody graphic novel as much as the next guy—but I would be lying if I were to say that a splash of color and occasional smile wouldn’t be welcome every once and a while. Enter stage left, a Fraggle Rock comic book … which is a thing! Along with Labyrinth, The Wizard of Oz, and Teenage Mutant Ninja Turtles, Fraggle Rock videos were in constant rotation on my family’s VCR when I was a kid, so this was a real treat. With its whimsy and light humor, Jim Henson’s lovable, subterranean muppets return here for a five chapter epic adventure that will challenge you not to feel like a kid again.

In Fraggle Rock: Journey to the Everspring, we join Gobo as he is trying, desperately, to figure out something to invent to help the residents of Fraggle Rock. After not getting positive feedback on ideas like a solar-powered shoe polisher or “some kind of choosing, sorting, deciding machine,” Gobo is dejected. But after he finds out that water has disappeared from Fraggle Rock, Gobo and his friends venture out to find out why. Over the hundred or so pages, the Fraggles, with the help of their small friends, the Doozers, bravely search for what is stopping their water supply. In their exploration, they encounter another group of alt-looking Doozers who let the Fraggles know that, to save their water supply, they will have to deal with Gorgs—giant monsters who consider Fraggles pests.

Fraggle Rock: Journey to the Everspring is brilliant in taking you out of this world and pulling you into the unnaturally beaming world of underground Fraggle Rock. Artist Jake Myler (Orphan Blade) perfectly captures the colors and feeling of the old series while putting a fresh sheen on the beloved characters. My favorite thing was how much character Myler put into each character, especially the Doozers, who each feel like individuals. Coupled with the great art, the writing of Kate Leth (Adventure Time) is a brilliant mix of innocent banter dotted with some subtle edge. It’s great to be able to just let lighthearted fare roll over my eyes. The writing isn’t dumb by any stretch, it’s just refreshingly airy and the story is almost without consequence. The highlight here is the songs that come up suddenly, they really make the whole experience that much more authentically Fraggle … and Henson.

The only negatives here, among a pile of pure comic book joy, was how the story would at times drag. I think this is due to the fact that Leth was trying to drive home a point or lesson, which, I guess, is important for what is fundamentally a kids’ comic book. There are a few spots where characters have to talk themselves, or other characters, into pushing on. It can come off as cheesy, but again, this is a kids’ book, so stressing theme over agility can be excused. Still … I think kids are savvier—especially today—than authors give them credit for.

This is a great read. No doubt about it. It has adventure, humor, whimsy, music and everything else that made Fraggle Rock so great. Even the most jaded among us need these things in our lives. Yes, this is comic written for kids, but its sweetness and sentimentality—combined with a fun, comfortable art style—make it something that can appeal to all of us.