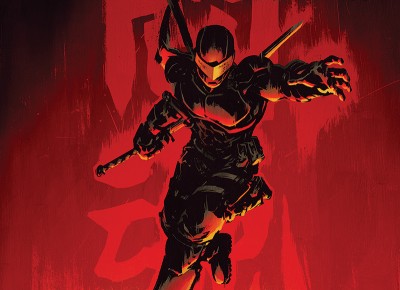 It’s been something like 13 years since I last consumed anything G.I. Joe–related. I missed the recent live-action films and, unfortunately, have not kept up with the comic book universe. So it was that fuzzy afternoon with my questionable friends Kodak and Patrick, sitting over Beto’s and surrounded by questionable smoke, that they made me watch roughly five hours of the old series. That was the last time I experienced the Real American Hero. A lot has changed, as evidenced by the title of this collection. Seriously Snake Eyes, what the fuck? You are literally the only cool good guy in G.I. Joe and you go and do this shit? Apparently, there’s a lot of upheaval in the G.I. Joe universe, and this twisty five-book miniseries doesn’t look to calm things down.

As someone who is relatively new to the G.I. Joe comic book world, I had a bit of a hard time following some of what was going on, but let me give it a shot. Okay so Destro, who has always figured as a major bad guy, and ally of Cobra, is captured. All is well, right? Nope. Because as he being transferred to a new prison, he escapes—with the help of none other than Snake Eyes. This confuses the fuck out of Destro, but he decides to use the traitorous bastard, tasking him with retrieving a package for him. Snake Eyes’s mission takes him to Erika La Tene—who implies that a young man named Billy as the person he is looking for.

The action that follows takes the reader through the underside of the G.I. Joe universe where intrigue and spycraft trumps explosions and tanks; showing off some of the more subversive characters, such as Snake Eyes, Ronin and Storm Shadow. Some of it can admittedly be sort of hard to follow. But it’s in the action packed moments that this collection really shines. Mashed in between panels of long conversation and exposé are incredibly well crafted fight sequences that remind us how awesome Snake Eyes is.

Even though I’m not fully versed in G.I. Joe and parts of this story confused me, I can only say that, for the most part, this was a very enjoyable read. The writing style and pacing from Mike Costa kept me intrigued until the very end. Paolo Villanelli’s art was dark and edgy enough to feel current but also didn’t take too many liberties, so characters were instantly recognizable. As I mentioned, some of the writing came off as too revealing but not so much that it took me out of the story.

As the story wraps, we’re left with a number of questions—which leaves the door open for Costa and Villanelli to continue with this arc if they want to—but not enough that I feel like it’s an incomplete story. Outside of Snake Eyes, several of the other characters were represented very well, and given a bit more depth, including a great section where we dive into Destro’s past.

Overall this is a great entry into G.I. Joe lore, and even a good series on its own—even if it can be confusing at times. But these books aren’t quite written for me—rather, they are penned for people like Kodak and Patrick, real fans of the universe that don’t need to scour the web, looking for any bit of context they can find. In that right, it truly is excellent—even if it does show Snake Eyes as a fucking traitor.