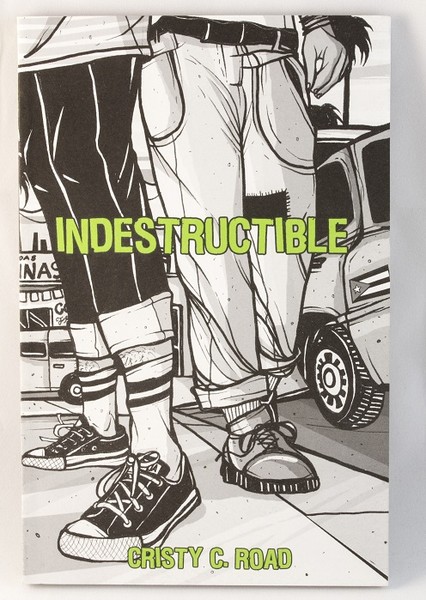 Indestructible by Cristy C. Road isn’t a comic per se—it’s more of an illustrated novella. Everything is told in prose with illustrations providing visualization for descriptions already present in the text. As such, the format risks redundancy, but it’s a small nit to pick in an otherwise engaging and charming autobiography.

The novella’s subtitle says it all: Growing up queer, Cuban, and punk in Miami. Whether that’s enough to capture one’s interest is largely dependent on whether or not they identify with any of those categories: the difficulty of self-definition when not part of the mainstream binaries; the cultural confusion of trying to maintain ancestral cultural identity while merging with the greater American zeitgeist; the dauntless hope and automatic victory of self-righteous youth burnt-out in age and justified angst. However common they may be, Indestructible’s distinctly well-written narrative and Road’s consistent use of inclusive “we, us, you” makes the reader feel like a part of her experience.

Her queerness began as it does for many of us—with others assigning it to her and subsequently finding the category fitting. She was an androgynous youth resentful of expectations of her budding femininity, and a few social missteps were all it took for her to be universally recognized as a “dyke” before she’d realized it herself. The question of cultural fidelity is familiar to anyone who doesn’t relate to mainstream narratives. Roads is as crusty a crustpunk as any, so that filthy lot will enjoy her unashamed odors.

One final attraction: The charms and miseries of adolescence are universally known but often forgotten. Roads captures the almost mythic abandon and zeal of sex-crazy, identity-bereft/obsessed teenagers as they indiscriminately fuck and drug. Even the relatively innocent youths will recognize that bold adventurism and eternal conflict between innocent youth and preening adult. Nothing makes sense, but we know it all; I  Roads doesn’t sugarcoat the challenges, dramas or problematic elements of her life or subculture, but she’s grateful to it for giving her that push into carving out her own space and identity when the world only offered her cookie cutters and high heels.

Indestructible will be difficult to track down, and as such, one ought know what they’re getting before putting in that effort, but to reiterate, I fully enjoyed it and was impressed by how well Road captured the raw emotional intensity of adolescence. I hope if this has struck your fancy you will indeed seek it out.