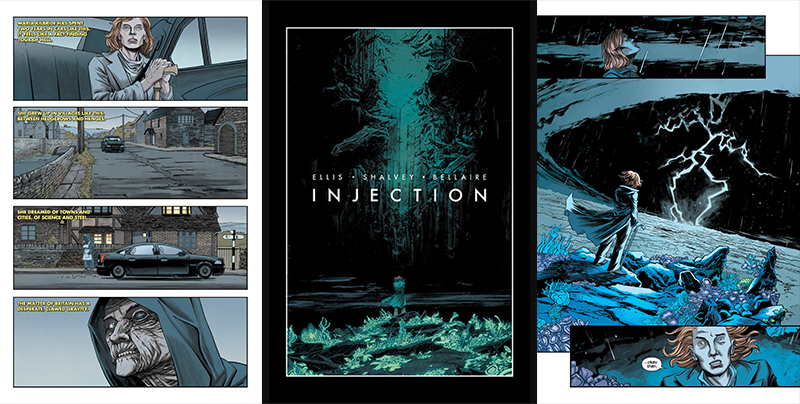 If you like science and a logical explanation to supernatural happenings, then look no further. Injection would be the Sherlock Holmes of the graphic novel world and intrigue with heavy thinking are the tools at its disposal. It’s a redemption story about five specialists who created an A.I. to keep the future interesting and now said A.I. is running amuck, causing our team to be reunited to handle the twisted future it’s creating. Each member of the team is “damaged goods” of sorts and longs, at their own expense, to right the wrongs of their past actions.

Injection centers around Maria Kilbride, an insane genius that never seems to get the credit she deserves. She’s a loner with a troubled past and spends her time between asylums and contracted otherworldly investigations. In the past, the team developed an injection into the World Wide Web that allowed it to be self-aware and make changes to the future in case it became stagnant. The injection then creates ancient folklores and implants them in the present day. Case in point; this story features evil fairies that can make cauliflower grow out from all of your major orifices.

The artwork in Injection is pretty straightforward. Its job is to move the story along and it does that well because the story is the big star of this graphic novel. The plot is linear which is nice to see among the timeline jumping of other graphic novels. There are twists and turns but they flow from the narrative and not flashbacks or, in Marvel’s case, alternate universes. The pacing is slow, but that effect is used to build on the mystery and its eventual unraveling. Overall this is a bit of an origins story, so the action is being saved for future volumes.

While the “A.I. goes bonkers” storyline is nothing new, I still get the feeling that this is new territory and that comes about from the excellent presentation of this graphic novel. This is confident and intelligent story writing, so as the reader, you feel this world is plausible no matter how far-fetched it gets. Much of modern storytelling relies on gimmicks to stand out and this story forgoes all that because honestly, watching five people slip into insanity is much more appealing.

Injection is definitely for the thinkers out there, so I wouldn’t recommended this to the comedic and campy mayhem of our superhero fandom. The violence in Injection feels real and its sparsity only adds to its authenticity. Each death poses questions and Injection leaves it to your head to figure them out.

Overall Injection is a solid read, and if you’re up for a night of thoughts this is an excellent read. The team in the story comes together as you slowly slip into their world. You bond with the characters as they learn to bond with each other. Halfway through the graphic novel, you’ll be shouting, “Don’t go in there!” and by the end you’ll be shouting, “Aw, wait … no. I need more!” Which I believe was writer Warren Ellis’ complete intention.

Injection is engaging at the worst of times and a juggernaut of internal psyche at its best. So grab some espresso or your favorite cup of tea and dive into something so compelling you’ll forget which world you started in.