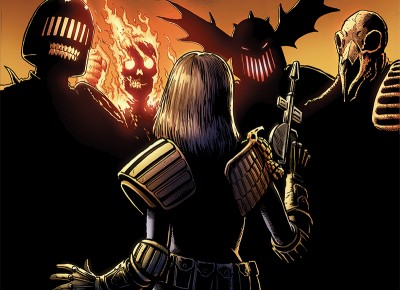 We can all agree that the 1995 Sylvester Stallone, Rob Schneider Academy Award–winning masterpiece Judge Dredd is one of the greatest achievements in the history of cinema. Seventeen years, later a reboot was made—simply called Dredd. It was rated “R” and was dark, gritty and, if you can believe it, leaps and bounds better than its predecessor. Here’s where it gets interesting though—did you know that these two movies were based on a comic book? That’s right, a comic book, or as your gramps would call it, “the funny pages.” Lets get down to the brass tacks. For those of you not familiar with the Judge Dredd series, let me school you for a bit.

Judge Joseph Dredd is a cop in the dystopian city of Mega-City One, a special type of cop. He’s known as a “street judge,” meaning he has the right to arrest, convict, sentence and execute the criminal on the spot, kind of like the modern-day police. Judge Dredd made his feature debut in the second issue of the British weekly science fiction anthology magazine, 2000 AD in 1977, being the magazine’s longest-running character. Dredd is just one of many street judges in Mega-City One, armed with a “law giver” pistol that is programed to recognize only his palm print. Another perk of being a street judge is the ability to ride around on a sweet ass motorcycle known as the “lawmaster”! The lawmaster comes equipped with machine guns, laser canon and A.I. capable of responding to orders from the Judge himself. Another fun fact about Dredd is the fact that he wears a helmet that covers about 90% of his face, which itself is rarely shown in the comic except for some flashback sequences here and there.

Now that we’re sufficiently versed in all that is Dredd, let’s get on to the comic at hand, Judge Dredd Classics: Dark Judges. To be blunt, the dark judges are some seriously bad dudes; they’re basically the four horsemen of the apocalypse. There is Judge Death (the Judge who symbolizes Death, duh), Judge Fear (symbolizing war), Judge Fire (symbolizing famine) and Judge Mortis (symbolizing pestilence). “What are theses new Judges’ deals?” you may be asking. Well, they hail from a dark dimension called “Dead World.” To these dark Judges, life is the ultimate crime, therefore everybody is guilty. Having mobbed through their own universe and having killed everything in their path, they have now set their sights on Mega-City One. It’s going to be a real tough time for Dredd and his crew to kill the dark Judges as, technically, they’re already dead. Their true forms are spirits that need to inhabit human bodies to inflict harm; so killing the body doesn’t kill the spirit.

This origin story of Judge Dredd’s arch-nemesis is fucking cool to say the least, in all its collected and stunning glory. The speed of the writing and how much they are able to cram into this mini-series is simply amazing. There are essentially four stories, and the way the writers are able to develop characters, plot and everything else that goes into a good comic is awe inspiring. To put the icing on the cake is the artwork, beautifully drawn but with a few touches of grime and dirt that match what Mega-City One would feel like in real life. To be blunt, I’m a huge fan of Judge Dredd Classics: The Dark Judges, and if you’re into comics, you should be too. I’m keeping my fingers crossed that a Dredd II film is in the works.