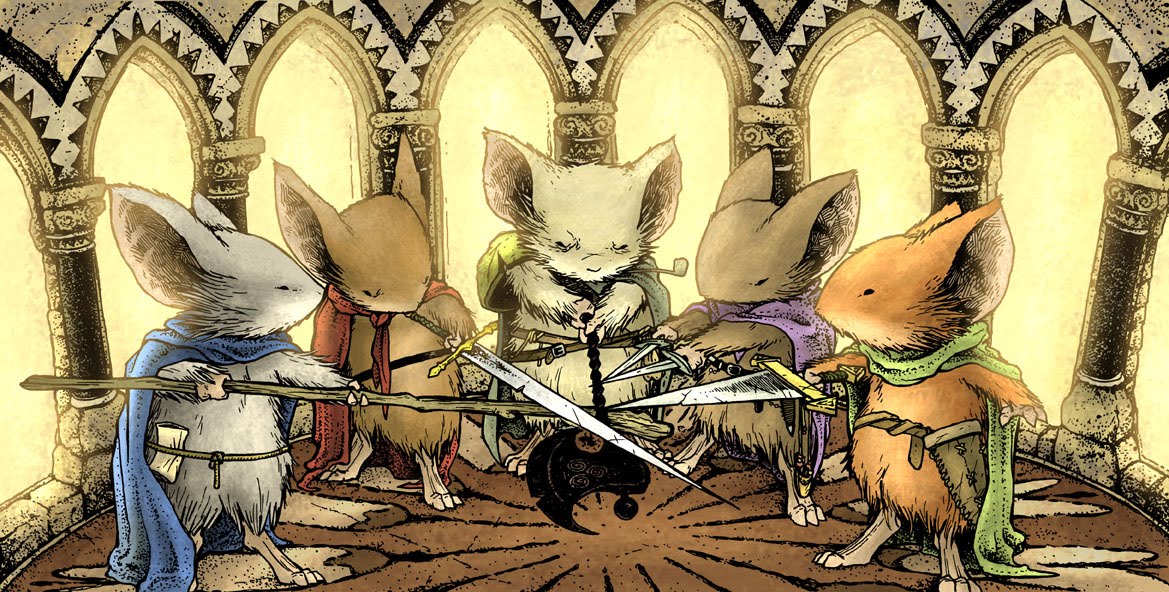 For those not familiar with the Mouse Territories it’s really quite simple. The world of Mouse Guard is one centered around talking mice during the Renaissance period. Mind you, I said simple, not plausible. These mice engage each other much like humans would have back in those days of yore. There are maidens, evil beasties and shady gray characters we’re not too sure about yet. The heroes, much like our own fairy tales, are unlikely but chock full of character. These Mouse Territories have been mapped out by brave quests, fallen soldiers and an odd bit of luck so each comic unfolds a whole new turn of events. This fantastic collection of graphic novels—brought to us by a slew of accomplished artists—is fun, endearing and just darn stinking adorable. We are now on the third volume in this series and we are really starting to see the world of Mouse Guard come into focus.

The setting for these tales is June Alley Inn, where patrons are given the opportunity to settle their unpaid tabs if they can tell the best story. The patrons are ordinary town folk and they tell each story as if it might be true. This is where legend comes into the graphic novel’s title and all that hear these tales are left to discern the truth for themselves. There are stories of dancing weasels, heroic blacksmiths and a fever that once saved a town. Some of these stories were long and some were short but each story did have a message. A few mice told their stories and paid their debt anyway; they knew their story wasn’t the best but still felt it should be heard.

Now, as an adult I was initially worried about these stories being too childish. The Wind in the Willows kept popping into my head and I kept expecting to see an extravagant frog pull up to the inn in a Model T. However, no frogs appeared and I found myself enjoying the graphic novel the way I would a high caliber animation film. Much of animation IS for children, but a good plot and fun characters will hook just about anyone. Mouse Guard makes great use of its colorful characters to the point where I was trying to find myself in one of them (until he was eaten).

Mouse Guard’s illustrated artwork varies with each artist and story but the overall artistic theme is beautiful and quaint. It reminded me of those old Richard Scarry books and seeing where the animals lived, while kind of wanting to live there yourself. The artwork is one of the stars in this series and it’s exciting to see all the different talents these graphic novels attract. Each story within Mouse Guard feels fresh because each story has a new set of people behind it. This is an incredibly clever concept and I look forward to seeing what this series does with that in the future.

Being that this was my first step into the Mouse Territories, I was pretty hesitant about shoveling praise on these comics. Since diving into this world, though, I’ve found that much praise is due because everything about this project is so carefully laid together. It’s a simple, beautiful and enjoyable yarn. So the next time you’re in the mood for fairy tales but are tired of the old English ones that Disney has beaten to death, perhaps consider a new world with smaller heroes and less evil stepmothers. Mouse Guard: Legends of the Guard Volume 3 is a big thumbs up.