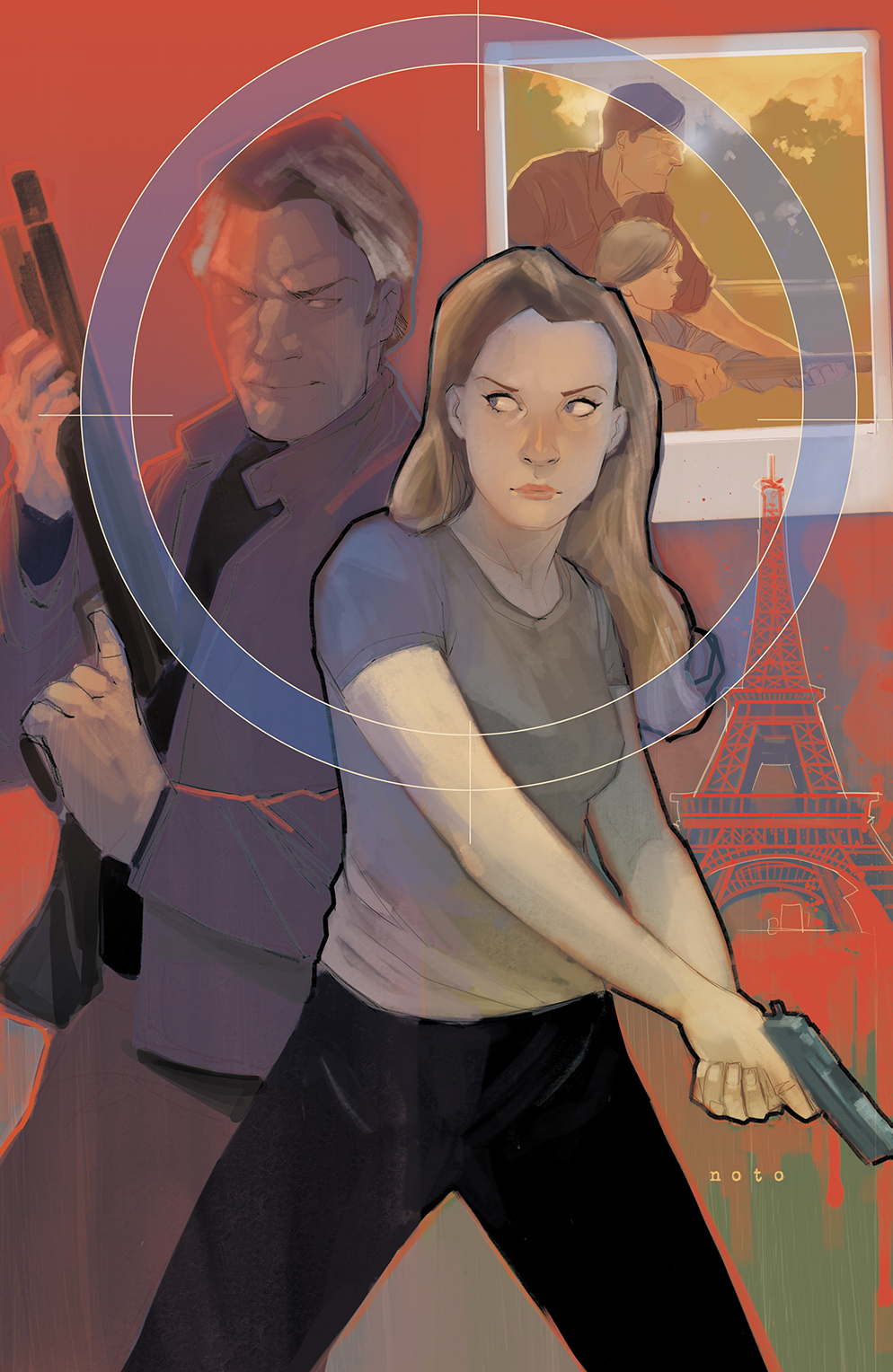 Butterfly follows the story of Project Delta spy Rebecca Faulkner dealing with the fallout of a botched operation in Oslo, Norway. The resulting series of events leads her to a vineyard in France, challenging information she accepted as fact for the majority of her life: She discovers her father David, codename Nightingale under Project Delta, alive and well with a new family to boot. A few pointed firearms and heated words later, they’re on the move, fleeing for their lives and away from a coherent plot.

While Butterfly’s initial chapter leads readers to believe this is about Rebecca, chapters two through four shine the spotlight more on her father and the shadows cast by his legacy. I think her story ultimately suffers for this, depriving her of much else beyond a personality equivalent to a wet blanket soaked in angst. I enjoyed the themes discussed within this comic, but I just wanted more out of it. Just as it sank its interest fangs into my brain, it’s over—and the jarring, at times downright arbitrary, flashbacks and time shifts veer the pacing to the point of frustration. At one point, you start from one date in 1993, then go back an hour, then another couple, then a couple months, then forward, then back again, then forward—it detracts immersion and comes off as weak writing. I wanted something with a little more clarity. I get the need for timing and situational context, but the result here is just a muddled narrative highlighted by the subtext of inner demons and a lineage stained with blood.

At times my mind wandered to the Metal Gear series due to similar themes of political subterfuge, violent mercantilism and convoluted plots—partly because the recently released free infiltration game inundated my every waking thought. Much in the way that Metal Gear Solid starts out with Solid Snake and eventually focuses on his “father,” Big Boss, Butterfly begins telling Rebecca’s tale, but ends up being more about her father’s ambitions for a better world through mercenary groups, albeit with less militarism in the latter example. Everything wraps up hastily and with little resolution. I didn’t feel like I had enough time with the characters to care about their outcomes. Rebecca comes off as flat and dejected to the point of boring. Granted, her emotional state is well-founded considering the trauma that a father’s death might inflict, but I wanted Butterfly to explore this better—something an additional four issues could accomplish.

Adam Guzowski’s heavy sepia tones wash over the entirety of the miniseries, complementing the residue of Rebecca and David’s pasts. Two different illustrators pen the pages in Butterfly with a surprising degree of continuity. Antonio Fuso’s illustrations in the first two chapters blend seamlessly with the latter half. I really appreciate that consistency—though, truthfully, nothing here gripped my eyeballs with enthusiasm. There are a couple of high-intensity action sequences, but I felt myself scanning the pages rather than stopping to capture any particular scenes. I don’t want to suggest that the art here is bad—there simply isn’t anything noteworthy within the thick border lines and faded flashback scenes.

If you’re looking for a something to digest quickly with few strings attached, give Butterfly a try. It’s a slow burn without much payoff, but there’s an intriguing story beneath the confusing action. I enjoyed the time spent reading it, but I’m left wanting more. In that respect, I commend Amel and Bennett for crafting a story with great potential. I won’t hold my breath for a sequel, but I’ll definitely keep an eye out for that possibility.