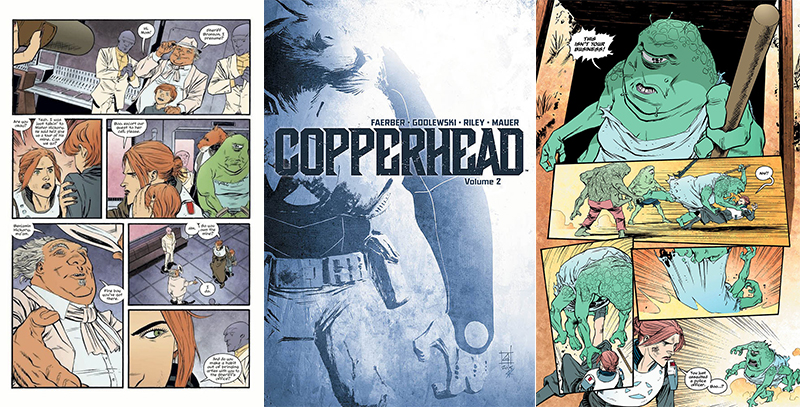 What if the final frontier was as wild as the Old West? That’s the basic concept of Copperhead, and given my interest in the era of manifest destiny, I decided to bite. My first impression of Copperhead was something of a mixed bag. I loved the space western setting and the art style definitely caught my attention, but I wasn’t sure what to make of the characters. Clara Bronson, series protagonist and the new sheriff in the titular mining town, struck me as abrasive at first, but I warmed up to her after a few issues expanded her personality beyond “surly workaholic.” Deputy Budroxifinicus, begrudgingly nicknamed “Boo,” is easily the fan favorite—certainly mine at least. He figures into the plot a little more this time around, but it’s definitely still Clara’s tale, and I’m happy to see her callous disposition shift from cliche to well-rounded.

To recap: the events in the first five issues sets the sand-scathed stage for Clara and her son Zeke after accepting a job offer as sheriff as the previous one met a violent end. After bucking the status quo shortly upon her arrival, Clara is quickly put to work attempting to diffuse a domestic dispute at the edge of town. After a gristly murder, a missing family heirloom, and a series of thickening plot twists, we find out that the family’s son had a gambling problem and indirectly contributed to their deaths, so it’s no surprise his mother wants nothing to do with him. Clara even develops a personality as well as respect for Ishmael, an artificial being created for a war gone by.

As the first volume drew to a close, I felt assured that Copperhead laid the proper foundation for captivating adventures, but after reading volume two, I fear my initial conjecture could be true. Where the former featured an interesting plot with a fairly weak cast, here we have (mostly) great characters with a bland motivating force. Most of the plot in volume two feels trite. There were a few moments that left me scratching my head. Why would Zolo, this arc’s cardboard antagonist, invest so much effort to hold one important character hostage when upon two seconds of reflection, he abandons the entire plan. It wouldn’t be such a big deal if it wasn’t the primary narrative thread. I do appreciate the way Faerber sets some of the comic’s wheels in motion (i.e. Clay’s foreboding prison escape) and I liked Boo’s and Brexinfoyle’s philosophical dispute about allegiance. Godlewski and Riley paint some truly beautiful portraits of the gritty nature of life on the planet of Jasper. There’s one particular panel in issue seven showing a gruesome headshot that I couldn’t look away from. Their alien creations are visually entertaining, though I wouldn’t necessarily say they push the limits of imagination.

I didn’t dislike Copperhead’s second arc, but I have little reason to applaud it. While Godlewski and Riley continue to impress artistically, there isn’t much substance to enjoy. The story has potential stewing beneath the surface—I found the “arties” intriguing and I’d love to know more about their dissention from government war machines to mercenaries, especially Ishmael. I think Brian K. Vaughan’s endorsement is the biggest contributing factor to the book’s success, but after I read the first few issues last year, I don’t exactly agree with the iconic story-mancer. If Faerber tightens up his dialogue and characters a little more, in addition to lessening his reliance upon Western tropes, Copperhead would be something truly special. Until then, color me concerned.