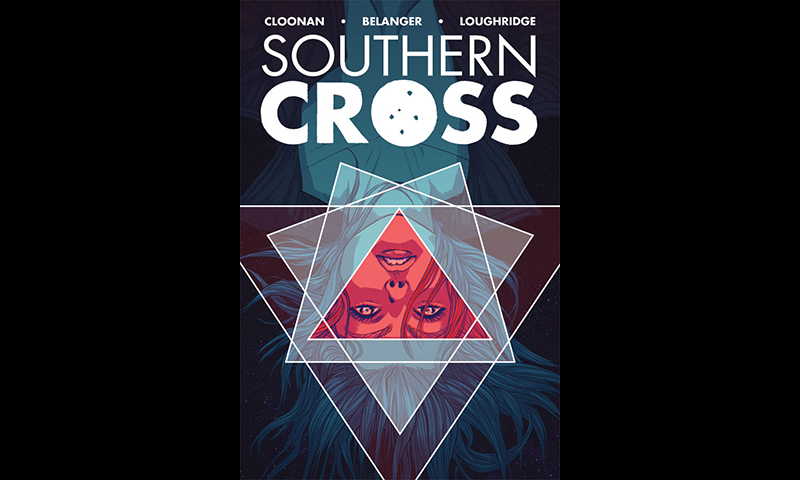 Alex Braith is a surly woman with a shady past traveling aboard the space-tanker Southern Cross, bound for Saturn’s moon, Titan. Her goal: to retrieve the remains of her dead sister and find answers about her mysterious passing. But not everything about this ship is exactly how it appears—her cabin mate has disappeared, and she keeps getting strange headaches and visions. Soon, she finds herself wrapped up in a mystery that threatens to end her journey just as it was beginning. Southern Cross is the latest creation of the talented and versatile writer/artist, Becky Cloonan (Gotham Academy, The True Lives of the Fabulous Killjoys). Inspired in part by Agatha Christie novels, Cloonan blends adult sci-fi and psychedelic horror into something to like for fans of ghost stories, Alien or just a good mystery that takes its time to unfold. Her cosmic co-creator is Andy Belanger (Kill Shakespeare, Swamp Thing), who illustrates ambitious page compositions that produce a sense of scale and hallucinatory wonder. He’s created an extensively detailed ship full of long, mechanical corridors and dark corners where things go bump. Everyone knows that space is generally a vast, empty void, but when Belanger draws it, there are swirling clouds, flying asteroids and ‘Kirby-crackle’ filling the sky. Cloonan and Belanger are a great team, making fantastic, suspenseful comics. If you’re looking for a skillfully paced thriller combined with cold, dark sci-fi, get on board the Southern Cross. –Nate Alley