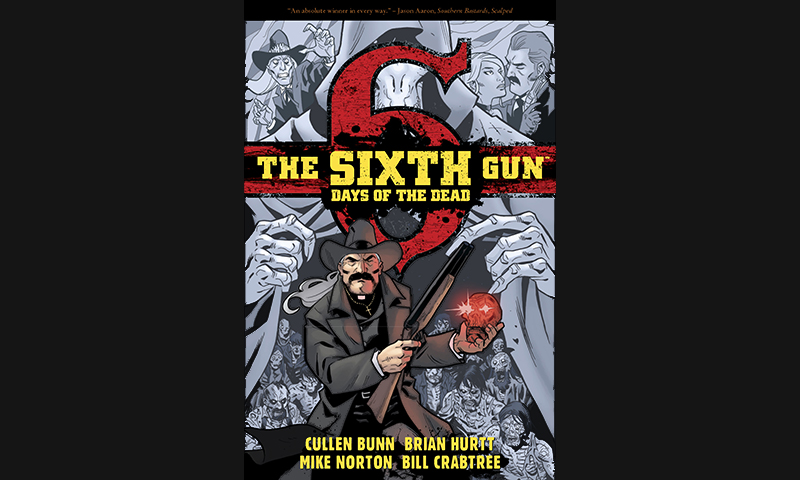 Review: The Sixth Gun: Days Of The Dead

As a fan of Western Fiction and horror, I had high hopes for The Sixth Gun, and I am pleased to say that I was not disappointed.  The illustration drew me in and the story, although a little slow at first, kept me engaged and excited to see what would happen next in this Old West gun-slinging story.  With a cast you would expect in a western, like cathouse owners, Civil War castoffs, Pinkerton agents and preachers, this story not only tickles and delights my enjoyment of western stories, it also brightened my dark little horror fanatic soul with a hanging tree and plenty of gunslinging action and dark characters. Missy Hume a mysterious woman with unclear motives, enlists Pinkerton agents to find a valuable gun that belonged to her late husband General Oliander Hume, currently in the hands of a preacher.  However, the perplexing gun falls into the hands of his daughter, Becky Montcrief, who discovers the gun has supernatural powers and imprints itself to the person who uses it after the previous owner passes away.  Only Becky is able to wield the gun and bad people are after her. The illustrations seem a bit cartoony at first glance.  However, Brian Hurtt’s art comes to life as he conjures the horrors on the pages and story’s action increases.  While portraying the action and horror in a way that draws you into the story rather than distracting you, he also does an amazing job at depicting the period costumes and settings. The Sixth Gun is a perfect mash-up of western and horror wrapped up into a highly entertaining comic. This was an excellent start to what I feel is going to be one of my new top comics to read. —Kristal Starr