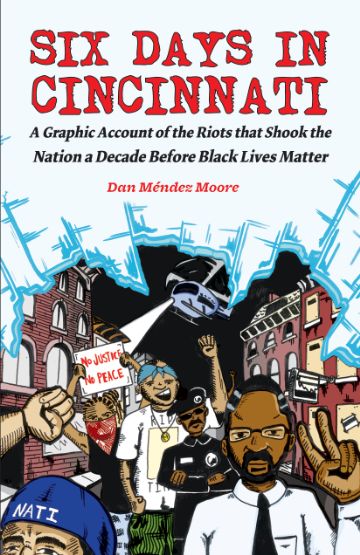 On a spring day in Cincinnati, 19-year-old black male Timothy Thomas was murdered in a back alley by CPD. He had a warrant for a retinue of traffic violations and was fleeing arrest, but he was unarmed and the injustice of the situation was plain. What followed were six days of passionate protest, looting and community solidarity that redeems the world even as the King’s Law shoves it back into the gutter. The year was not 2016, 2015 or even the now distant days of 2014, when Ferguson was similarly shaken. The year was 2001, 15 years ago, and little has changed.

Six Days in Cincinnati by Dan Méndez Moore is an earnest accounting of those days. It’s made up of his own memories, several interviews and dramatizations of events that more or less must have taken place. There is no great truth revealed within, and Moore justifies his comic’s existence by simply stating that in the history book of Over-the-Rhine (the poorest streets of Cincinnati, and at points, even the nation), Thomas’ story must be recorded.

However, it wasn’t Thomas alone for whom the community was demanding answers. He was merely one of 15 black men killed by CPD since 1995, and the familiar refrains had gained enough voices to be heard. “No Justice, No Peace, No Racist Police!” an impromptu crowd chanted as they marched on City Hall. They were led as they usually are—by black clergymen and teachers and youths unafraid of the system’s strength. The City of Cincinnati’s response was also as usual—resist the crowd and arrest the solitary. However, as the protesters trampled the American flag amid Black Panthers crying “Black Power!” and attracted looters and arsonists in their wake, they provoked more draconian measures. On the fourth of these six days, Cincinnati issued a curfew from 8 p.m. to 6 a.m., effectively strangling the movement’s momentum. After some arrests and casual assaults, the city made many grand conciliatory gestures, the protesters enjoyed a triumphal march celebrating their passion, and this exercise of American catharsis drew to a close. The officer who shot Thomas was dismissed but not charged and rehired elsewhere. Ultimately, Cincinnati was shamed but not sentenced for its crimes, and in the epilogue, 10 years later, all anyone remembered of those days are their individual victories and inconveniences.

Moore’s book, as previously stated, only wishes to represent those days honestly. The art is without flourish or even consistency, but one dares not judge an amateur on a professional grade, and it serves. As such, the book gives the reader the opportunity to look back on this forgotten (by some but surely not all) event and judge with their own eyes. My judgment? Despair, resignation and finally hope.

It’s amazing how utterly vanquished and isolated the protesters became once the sheer administrative might of the city came into play. Sure, they weren’t going to overthrow City Hall, impose new order and new justice, and declare sovereignty from the United States, but in a representative democracy, one needs representation for influence. What is revealed, and has been revealed time and time again before and since, is that impoverished black people don’t have that representation; the voice in the hallowed halls to plead their case before law and order. Without it, they only have rabbling in the streets: streets laid by the system, owned by the system, controlled by the system. Yet Moore insists upon the importance of these six days and how they brought the community together. The political achievements may have been few, but the spiritual victory redeemed Cincinnati as their home.