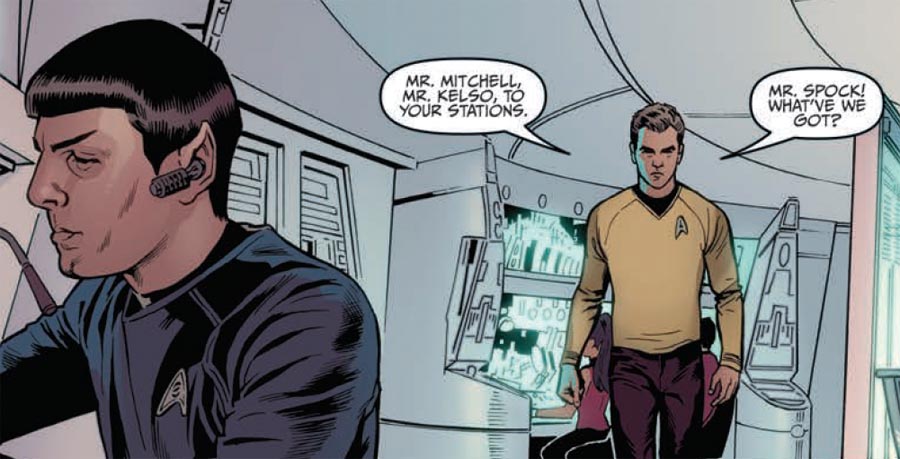 Seeing how successful the new Star Trek movies have been, it only makes sense that someone would eventually get the bright idea of writing of a comic based on the new characters and new timeline. If you are a fan of the new movies, then this idea may or may not sound like it could be pretty rad. I am here to tell you that this comic series is nothing short of perfection when it comes to giving you more information to a story that you don’t get to see on the big screen.

This comic takes place in numerous different time frames, starting from before the first Star Trek movie, up until events that take place after the second. There are nine parts and each focus on either a character from the films that you weren’t given a lot of information about, or a new situation that has occurred that we know nothing about. I really enjoyed reading the stories of a few characters that made  minor cameos in the films. It was interesting to learn about their past, why they were in the positions they were in and how exactly they got there.

It starts with telling the story of the big guy who ends up beating James Kirk to a bloody pulp in a bar. Hendorff is his name, and you learn about why he ends up becoming a “Red Shirt,” as they call it. For those newer to the series, Red Shirts are essentially the brutes of Starfleet basically, doing all the heavy lifting and security work. Another character you get to know a lot better is the little guy that hangs around Scotty in the films. You know the cute fella that looks like he’s made of stone? It turns out his name is Keenser, and that he isn’t just someone that gets pushed around and yelled at by Scotty all the time. He is actually a very smart creature who, as a boy, fixed a problem on a starship shuttle that not even the great George Kirk could figure out, earning his way into Starfleet.

You also get to see Scotty and McCoy having a few drinks while Scotty attempts to explain how there are several realities parallel to their own. Then the reader gets a look into one specific reality where the federation has finally defeated its arch enemies the Klingons. Instead of giving the majority of the credit to Captain Kirk as some would assume, the credit goes all to Captain Spock of the Enterprise. Can you say “plot twist?” Then, tired of living in the shadow of the captain, Commander Kirk and a select few crew members decide that they have had enough of the Federation and want change. So they embark on a plan to hijack a certain Romulan mining ship and live separate from the federation. Oh, and I almost forgot about how, after the events of Into Darkness, Commander Spock comes down with a fever that turns him into a raging sex maniac. I will leave that there and let the thought of that boggle your mind for a bit.

As I was reading, I honestly could not find one thing that I didn’t like about this comic. The dialogue wasn’t confusing at all, and even though there were a couple different artists throughout, it still is done very well. Personally, when I am approaching the end of a comic, I get one of two thoughts in my head, one of which being, “Man, this was a solid read—now I can move onto something else I have.” But the other thought that I get is, “Holy crap, what is the quickest way I can get the next volume of this?” The latter was the feeling I was left with when I finished Star Trek: The New Adventures Vol. 2 and am currently still feeling. I can truly call myself a Trekkie.