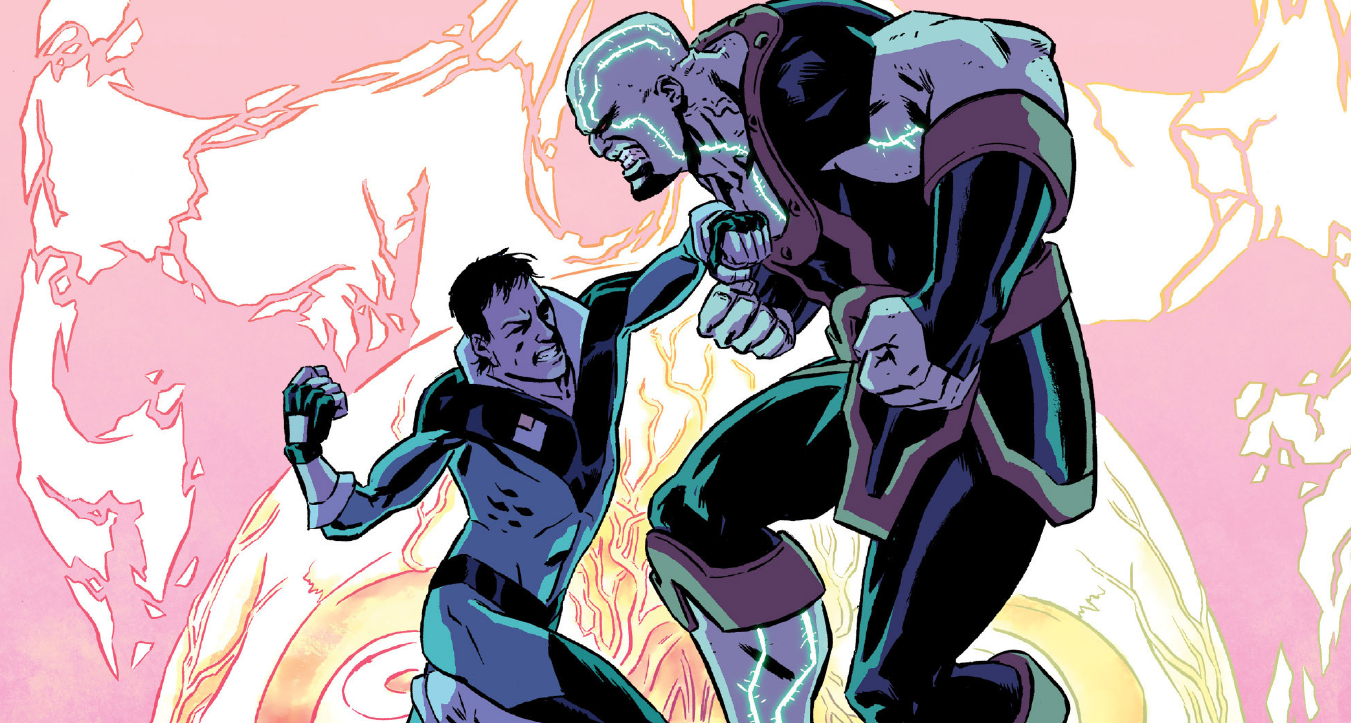 Image Comics is directly responsible for my benign addiction to reading comics. Back in ’92, I wasn’t poring over The Black Lantern Volumes for the third time; it was Spawn, Wildcats and Shadowhawk hidden in my room under more parent-friendly titles. Anytime I get the chance to curl up with an Image Comic, my giddy geek heart beams with youthful well-spent time. The Mantle is nothing shy of a continuation of Image Comic’s proud history in new titles.

First things first: In the Image Universe, heroes are odd, sex-prone, drug-using and occasionally evil—all for the greater, circumstantial good. You could be rooting for a character from one series then find out they’re the enemy from another series.

The Mantle is a superpower (With matching costume) that jumps from its host to another person at the time of their death. The Mantle is hunted by the most powerful villain in this unique world so The Mantle jumps persons with tremendous frequency. The catch is that The Mantle is more powerful than the villain, it just never has the time to develop.

The villain, referred to as The Plague, is incredibly fun to read and watch. He pretty much shows up and kills everything in his very overpowered path to The Mantle. He’s a tortured soul who has a very personal reason for hunting The Mantle and, because of this reason, he will never alter his path. The death scenes are a standout in this colorful graphic novel and you almost cheer when The Plague shows up because heads are about to explode to the tune of Game of Thrones. Think Friday the 13th when the campers start to make out and you see Jason’s shadow in the corner. Once again, you find yourself rooting for the bad guy and hope said sleeping bag gets hung over a campfire or wrapped around a nearby spruce. As a bonus, The Plague also sports an intense and constantly bleeding appearance that really imprints itself in your head for weeks after seeing it.

The hero Jen is frustrated and trying to make sense of it all. She’s not thrilled with her Mantle-hosting honor and desperately tries to stay one step ahead The Plague. Ultimately, she learns a few tricks by some unconventional methods, but her cheeky approach to impending doom keeps you smiling throughout.

In addition, The Mantle also has a team of do-gooders that travel around trying to keep the host alive. However, this quirky bunch just seems to serve a cannonfist (Not a word but you get the idea) fodder for this graphic novel’s wonderfully colorful deaths. The group keeps with the non-traditional flow of the comic and I look forward to see what happens with them in future volumes. Plus there’s a take on the strongest man stereotype that had me giggling spastically between panels.

The plot twists and turns, avoiding traditional happenings like a mom just served sushi at her five year old’s birthday party. It’s simple in course but the concept in itself could become infinity elaborate over volumes to come. More killer villains, more disenchanted heroes and exploding heads for everyone! The Mantle is outside of death—it’s infinite like Robin in the Batman comics. It’s a character in the way The Force is a character, just a bit more exclusive. They’re just way too many options with this concept.

Overall, The Mantle is a proud addition to the offbeat heroes Image Comics is known for, and once again I found myself enjoying a comic like the kid I never grew out of. In the era of graphic novels, The Mantle is refreshing, entertaining and just a hoot to view and read. I completely recommend it.