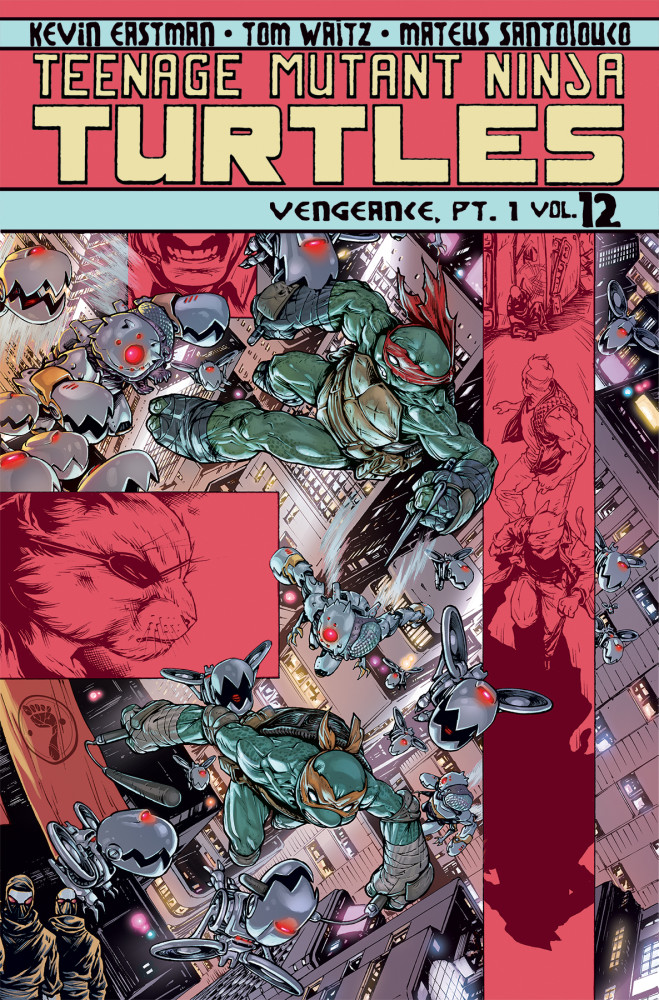 The IDW TMNT series has impressed me with every issue since the very first in 2011. Volume 12 of our reptilian guardians collects issues #45–47 as well as the 2015 Free Comic Book Day issue. Chapter 1 begins with a surreal dream-state, as Donatello’s consciousness wanders around something like purgatory, while our “heroes in a half shell” huddle over his battered form, licking their wounds after the epic finale fight against General Krang’s mobile battle fortress, the Technodrome. Professor Honeycutt, also known as Fugitoid, detects life flickering inside, giving hope to his grieving family. The Foot Clan also experienced loss in the aftermath of the battle on Burnow Island. The clan mourns for the loss of their leader Shredder, vowing to purge weakness and treachery from their ranks. Karai, Shredder’s granddaughter and interim overseer, takes charge in their sorry state, proving her legitimacy as Shredder’s right hand. Elsewhere, Casey Jones, the vigilante son of gang leader “Hun” Mason, fights the good fight against corner store crime and backalley violence. Each of these scenes set up something bigger for future arcs, and I really enjoy the depth given to each character.

Chapter 3 of TMNT Vol. 12, the FCBD issue, spends most of its pages summarizing significant arcs throughout the comic’s history—their humble beginnings as lab test subjects in a freak accident, the rise of the Foot Clan and Raphael’s brief, brainwashed involvement, the rise of fan favorites Bebop and Rocksteady, and so many other series milestones. It’s a great way for newcomers to catch up on such an iconic title without having to spend countless hours reading four years’ worth of content—it’s also fun for current readers as a refresher for important events. Chapter 4 builds tension for the next arc: Shredder returns to head the Foot Clan after forging an unlikely alliance with his savior Baxter Stockman, spelling disaster for the teenage mutants and putting Master Splinter’s life in jeopardy.

Waltz really knows how to write Turtles—from Donatello’s sharp intellect and Raphael’s angst and short temper to Casey and Hun’s dysfunctional family interaction, every character has impressive depth. Well, maybe everyone except Shredder—no matter which format he appears, Shredder is a universally flat villain, though I will say this is the best representation of him I’ve seen. I’m excited to see where they take the Immortals plot thread, as the repercussions for their discovery are already affecting our cast. Santolouco’s signature style continues to impress, balancing the series’ fantastical innocence and gritty violence. Donatello’s spirit journey sequences capture a childlike curiosity while still retaining a harrowing sense of loss. I love how Ronda Pattison’s bright, cartoonish color palette counters the grim events and lines that surround her hues.

As much as I love this title and franchise, I think the TMNT trades do feel somewhat brief. With three main series issue and a “recap episode,” four issues in a $17.99 trade feels a little light, but if that’s the price we as fans have to pay for a Ninja Turtles series of this quality to persist then so be it. If you haven’t already read this series, I highly recommend you fix that. Obviously I recommend that if you’re new to the series that you go back and start with the phenomenal first issue, but for being the twelfth volume, this is a pretty damn good entry point. The pizza-loving ninjas have a lot of fight left in them, and I have a feeling a lot of fight is coming their way. Cowabunga, my friends. Cowabunga indeed.