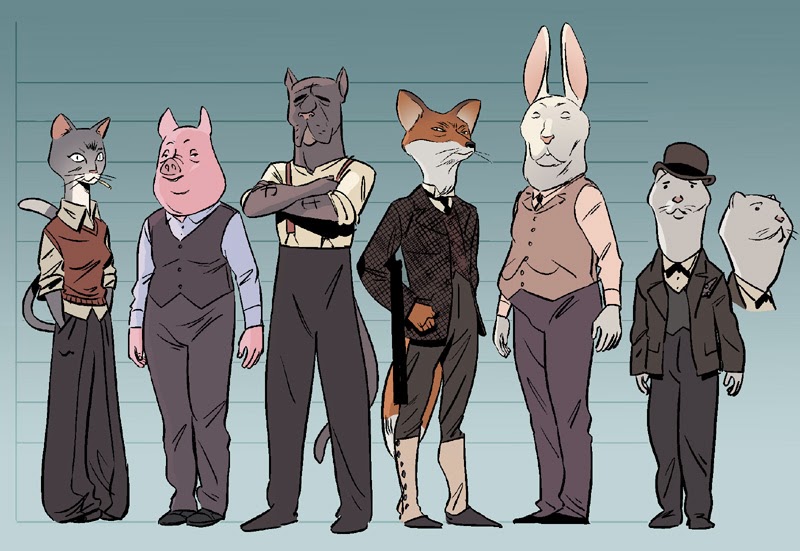 Wild’s End is very much a take on the classic alien invasion tale War of the Worlds, but with the added twist of the characters being anthropomorphic animal people. This isn’t exactly the most original premise, but overall, it was more fascinating than I expected. What really made it for me were the memorable characters and the way the creators crafted a solid feeling of suspense throughout the book.

It comes as no surprise that Dan Abnett, who co-created the modern iteration of Guardians of the Galaxy, excels at writing about a rag-tag team of characters from different backgrounds. Some of them strike me as simple archetypes, but when Abnett delves into their backstories, he gives you just enough of a taste to keep the reader wanting more.

It’s interesting how the creators use anthropomorphism in Wild’s End. It’s not at all like Animal Farm’s biting satire or Maus, where each species represents a race for social commentary. Any allusion to character that each specific animal portrays is pretty surface level. The story would play pretty much the same if it were recast with human beings. The animals are there to keep things stylish and give things a different tone than what you’d expect. It’s closer to something like Winnie The Pooh or The Wind in the Willows, if The Wind in the Willows occasionally had a character burned to death by alien spider-robots. Creating this mash-up of tones is where this book becomes subversive, not just because they made everyone into animals.

There are a couple of really great, nuanced characters here—starting with Clive Slipaway, a war veteran who is a recent addition to the town. He is portrayed as a stoic Great Dane with soft features, trying to live a quiet life. Wild’s End’s creators do this great thing where much of his dialogue is in smaller text, juxtaposing his soft-spokenness with the boisterous Gilbert Arrant, a rabbit who tries to get him involved in the town’s festival.

The best character for my money, though, is Susan Peardew, the reclusive writer who lives on the hilltop above the town. She is an anxious, compulsive cat who is none too happy to see the townspeople appear on her doorstep. Throughout the book she is constantly trying to alleviate her symptoms with cigarettes and booze and has to keep herself from putting her neuroses above the group. This leads to one of the best scenes in the book where our dog and cat bond over their respective “nervous conditions,” a reminder that these aren’t fairytale creatures, they’re adult characters with adult problems.

The back matter at the end of each issue is top notch. Usually, one can take or leave these things, but most of what we have here actually adds to the story. There are pieces of the actual map that the characters use to find their way across the valley and several pieces of writing that actually exist within the story and add a little to the experience if you want to take the time.

I.N.J. Culbard, who has worked with Abnett on several other indie titles (The New Deadwardians, Dark Ages), has a clean, colorful style that fills the book with rich, glowing purples and yellows. The characters aren’t particularly expressive (or in the case of Slipaway, not expressive at all), but I didn’t mind much because they were so well written. The Victorian-lamp-like alien machines are both elegant and menacing, although I’m not sure what the point of them attacking a quaint English village is.

While this book starts off slow, overall, it’s a pretty good yarn. If you’re looking for a quick read with gorgeous art and compelling characters, look no further.