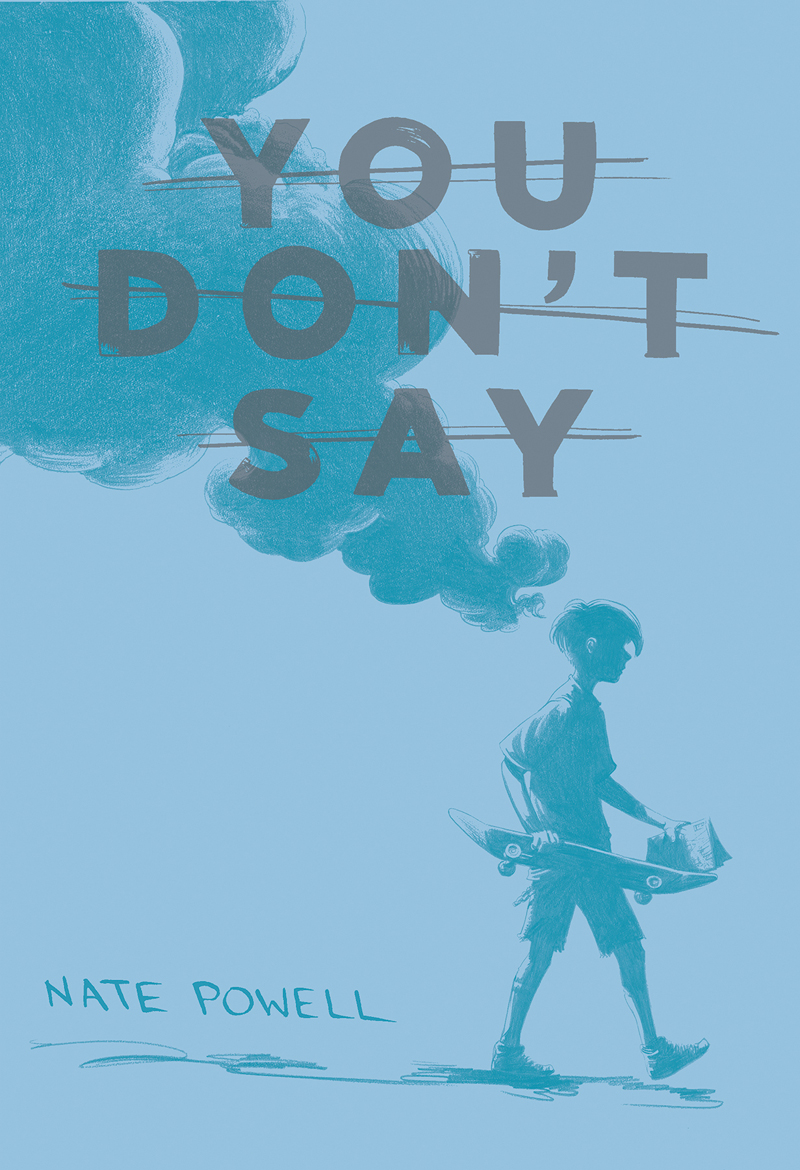 You Don’t Say is a graphic novel of collected comics from the mind of its author/illustrator, Nate Powell. Collected between the years of 2004–2013, Powell has picked some really great stories of his—some previously published, some long-forgotten until now. Powell got his first break in 2009 with his graphic novel, Swallow Me Whole that would go on to earn him the Eisner and Ignatz award for outstanding debut and outstanding artist. Powell would later go on to illustrate the book March, detailing the times and trials of Civil rights leader and US congressman John Lewis. Writing and illustrating beautiful comics wasn’t his only iron in the fire—no, Powell was also a musician. Owning his own punk record label, Powell also played in a slew of punk rock bands—pretty impressive, considering the clean-cut math teacher image that he gives off and the fact that he has been writing and self-publishing his work since he was 14.

With You Don’t Say, Powell tells 17 different stories that mostly involve being a young, carless adolescent. Some of the stories don’t really have a plot per se, but rather what happened to him, the author, (I assume) as a teenager. Some stories involve teens driving around aimlessly or hanging out in barren parking lots. Some are heavy-handed in tone and others deal with issues like racism and death.

A touch that I found interesting about You Don’t Say is the fact that each story has a brief introduction that describes the following piece as well as the comic in relation to the artist—something that I think gives more realism to the story, since it’s true to life. One of my favorite stories from the book is called “Cakewalk,” telling the story of a young white girl who decides to dress in blackface as Aunt Jemima for Halloween. When her teacher takes notice, she makes her wash the crude charcoal off her face, confusing the young girl. The way she sees it, she thought that everybody liked Aunt Jemima as much as she did, staring at her face each morning while eating pancakes—she just wanted to dress as her idol. It’s the simple stories like these that I like the most, a mix of innocence and racism.

Another racially charged story that I loved (and I had no idea it was a true story) was called “Like Hell I Will,” it tells the story of Dick Rowland, a black shoeshiner in 1921 who tripped entering an elevator and grabbed onto a white woman’s arm on his way down. Of course, being that he was black and the woman he grabbed to steady his fall was white, he was accused of sexual assault. So, of course, the racist people went crazy and started killing black people—a staggering number of almost up to 300 dead. It got so bad that the National Guard even joined in with plans on dropping bombs on black people’s homes. Crazy shit.

Not all is great with the book though; there is some criticism to be had. Some of the stories I found to be rather pointless. Most of them are just a mere couple pages long, seeming more like thoughts that popped into his head rather than a fully fleshed-out story. For instance, one story is about Powell and his friends eating dinner on his birthday, they then go to a party that he doesn’t like and leaves. That’s it. The word balloons on the pages bothered me, too. Although the art work is beautiful, sometimes Powell would try to cram so much conversation onto one panel that it came across as cluttered and difficult to read. Other than that, though, I found the book to be a joy to read, and it informed me about American history that I never even knew happened.