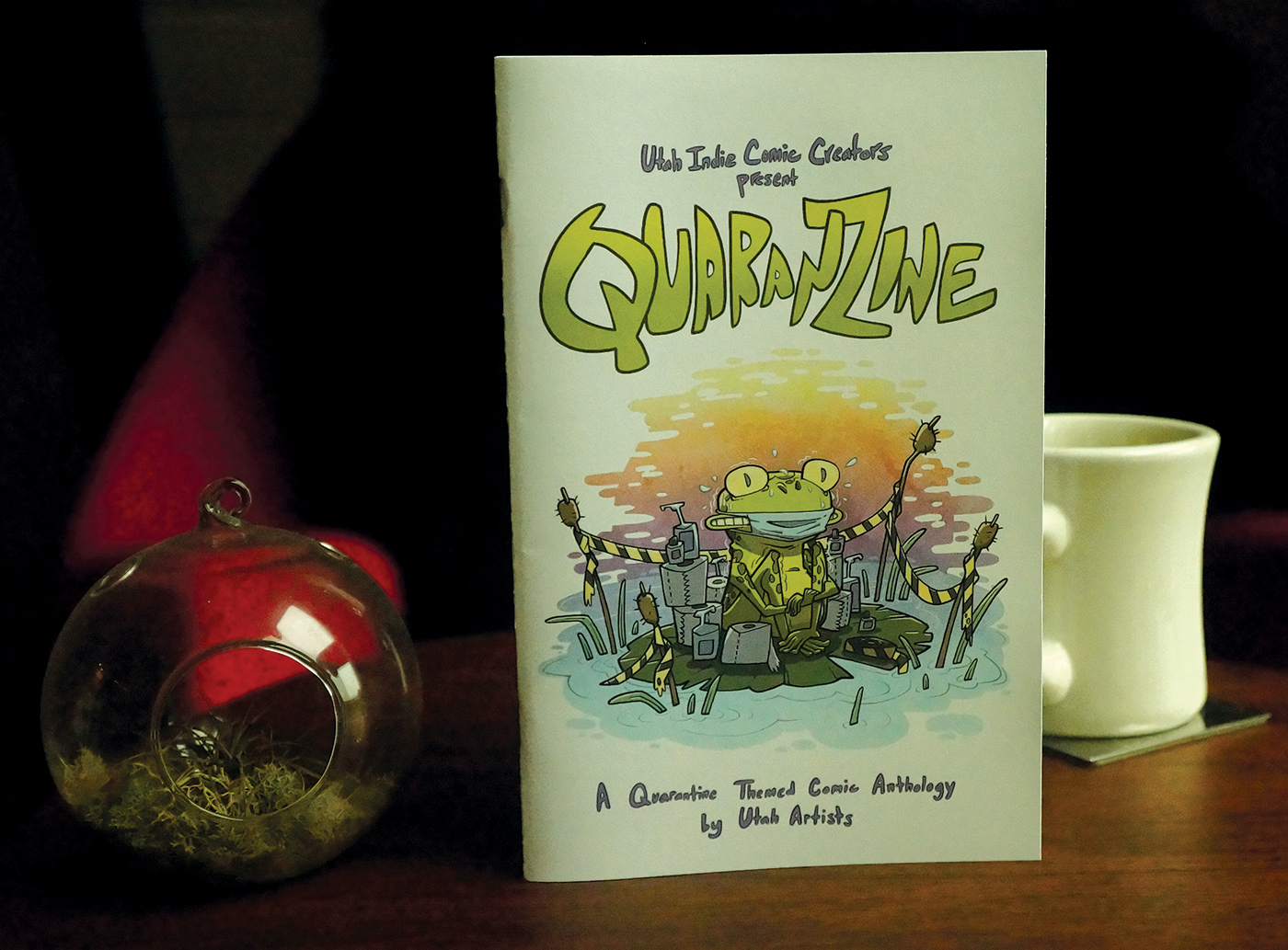 Attempting to maintain schedules and routines during self-isolation has proven strenuous, while any reasonable balance between work, life and relationships has gone awry. When staying at home is mandatory, and there’s a perpetual risk when interacting with others, it’s also difficult to sustain a sense of community. Quaranzine is a series of quarantine-themed mini-comics that offer a creative solution to this dilemma. Two local Salt Lake City artists and illustrators, Quaranzine founders D. Bradford Gambles and Spencer Holt, have found a way to fulfill their creative needs and preserve community fellowship.

Gambles and Holt have been in the business of illustration for several years. When he was younger, Gambles would create comic strips, “mostly ripping off Calvin and Hobbes,” he says. His first larger-project opportunity was making a comic strip for SLUG, and he has since worked on a number of his own personal projects—graphic novels, mini-comics and a webcomic among them.

Similarly, Holt has also been creating comics for “as long as I can remember,” he says. “I really started taking it seriously after a feature film I was set to direct fell through. I wanted to keep telling stories visually and quickly realized comics were a perfect medium to do so.” Holt has a history of writing comics for SLUG, City Weekly and for personal enjoyment. The two artists also collaborate on their project Token City Wondercade. “[It’s] about four kids in a spooky, run-down arcade,” says Gambles.

“Quaranzine was started to help foster community with other local comic creators and make a collaborative piece of art that comments on these strange times.”

A few years ago, Gambles and Holt created the “Utah Indie Comic Creators” Facebook group, which Gambles says was published “with the intention of creating a strong local community for comic creators.One of our favorite things to do is challenge ourselves to come up with new comics for some of the local small-press and indie comics/zine festivals in the area.” Amid quarantine, Gambles and Holt found themselves in a situation where many of their creative events were being canceled. Suddenly, the two were positioned to find a new, unique way to continue creating. In a collaborative effort between local artists and illustrators to engage with one another and fulfill the creative void, Quaranzine was conceived.

“Quaranzine was started to help foster community with other local comic creators and make a collaborative piece of art that comments on these strange times,” says Holt. The quarantine-themed anthology will feature several artists from the comic creators’ Facebook group. The zine offers creative opportunity in a time when it has become more difficult to engage with community members and local businesses where illustrative work would have previously profited. “We know everyone’s experience [with quarantine] is different,” says Holt, “[Contributors] mentioned doing it for a wide range of reasons: a sense of accomplishment, a sense of community, to share a message of hope, to make people smile and to process their feelings through art.”

Those participating in the project are creating their own mini-comic to be placed in the zine, ranging from one to four pages long. The approach and style of the comics vary. Though being in “quarantine” and what that means to each individual contributor is the overarching theme, some chose to go along a more humorous route, while other comics illustrate the emotional strain of self-isolation. A wide range of comics, from fictional to personal and from metaphorical to narrative, will be on display.

“Give us that raw, sequential art, baby!”

Gambles says, “The challenge to everyone was to interpret the concept of ‘quarantine’ in whatever way they wanted, whatever that meant to them. So you’ll get to see very different ideas, styles, feelings and stories from each creator.” Eleora Draws’ comic illustrates what she misses about normal life and concludes with the hope that, “we can come out of this a little less isolated from one another [as a society].” Other comics, such as the “choosable” comic by Cam Kendell, offer relatable content about abandoning the familiarity of your home to purchase desperately needed toiletries.

The anthology will include work from contributors Jess Smart Smiley, Ricky Vigil, Eleora Draws, Mitch Parker, Kade Whittle, Cam Kendell, Steve Anderson, Angela Sandberg, Noah Allen, Rachel Allen Everett, Chris Kirkham, Andrew A. Adams, Robert James, Holt and Gambles. “We hope that this gets the word out to other comic creators looking to connect,” Holt says. “Our Facebook group is open to anyone who is serious about making comics in Utah.” While the two are hoping this project provides communal relief to all those experiencing the strain of self-isolation, they are also aiming to expand their group to others who are interested. “Give us that raw, sequential art, baby!” says Gambles.

In addition to satisfying the artists’ thirst for creative fulfillment, Quaranzine allows community members to interact with one another and share relatable stories at a time when sustaining communication and outreach is often unattainable. Sharing creatively about the experience of quarantine can be largely cathartic. “Our hope is that we create something that brings our community of comic artists closer together,” says Holt

You can buy a digital and/or physical copy of Quaranzine via gumroad. Suggested prices are available, though Gambles and Holt note that buyers can pay whatever they want beyond the suggestion. All profits will go to the Utah Tribal COVID-19 Relief Fund, which focuses its efforts on Native American communities that have been especially impacted by the pandemic.