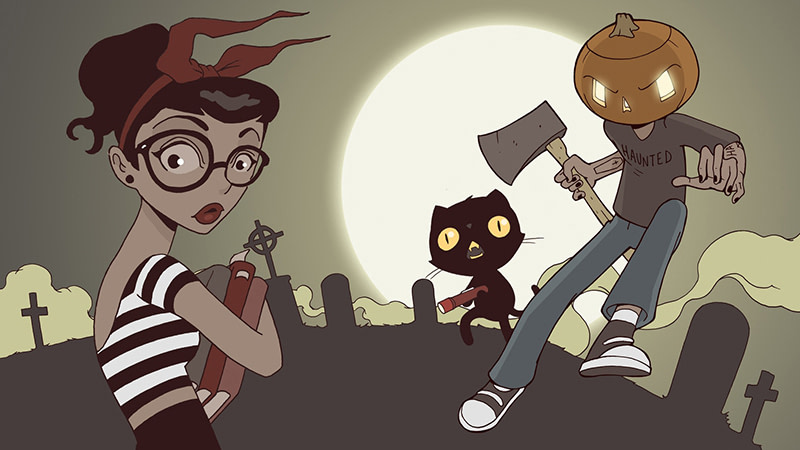 Walking the Path of Black Lantern with Chris Bodily

Imagine endlessly toiling on your life’s greatest work. Hours turn to days, weeks turn to months and years turn to decades as you perfect your craft—the slightest of adjustments changing the impact of your art in ways both slight and significant. Finally, your creation, your monster, your baby is unleashed upon the world—and your hours, weeks and years of work are consumed by the public in a matter of moments. This is the terrifying, Twilight Zone-y reality that most cartoonists live in, so you might as well throw in a cool, tattooed Jack-O-Lantern and rockabilly witch to liven things up a bit. Local artist Chris Bodily has been working on his graphic narrative Black Lantern for the better part of the last decade. Though he acknowledges the incredible amount of time and work that has gone into the project, his enthusiasm for the project is infectious.“It’s a Halloween fun fest!,” he says.

Bodily has made his presence known in the local art scene for years through sheer consistency and prolificacy. You’ve probably seen Bodily’s work on the cover of Utah Stories, in the pages of SLUG, at local art galleries or on the Internet–. “My art career is something I’ve been working on my whole life,” he says. Though Bodily is best-known for his illustration work, the seeds of his new path through comics were sown when he was very young. “I did a comic zine in high school called Hat. It’s embarrassingly bad, but that’s where I got my start!” Bodily built his career in art by participating in local events such as Craft Lake City, taking on freelance work and teaching classes at Bountiful Davis Art Center and Weber State Continuing Education. Throughout, he dreamed of creating his own comic.

Creating comics can be a daunting task, especially if you’re doing it all own your own. Comics combine graphic design, illustration and writing. Good comics combine those elements in a consistent and engaging way—it’s easy to overthink a project and get burnt out on it before it even really begins. “I had started projects before and would get five pages in, but they would overwhelm me,” Bodily says. “It wasn’t until I decided that I was gonna do one page at a time and not worry about where it was all going that I got the ball rolling. It’s like eating an elephant: Do it one bite at a time.”

After several false starts, Bodily found his inspiration in a Halloween art challenge. “Back before I knew about Inktober or all of the millions of drawing challenges on Instagram, I did 31 days of Halloween, so one drawing every single day of October,” he says. “One year, I thought to myself, ‘Instead of doing an illustration, if I did one comic page every day, by the end of it all I’d have a 31 page comic.’” Thus, the seeds for Black Lantern were planted. Over the past three years, Bodily has fleshed out the characters initially created for the challenge and refined their stories. The tattooed, pumpkin-headed Edgar, the rockabilly witch Fiona and Julius, the talking black cat, transformed from one-off illustrations into the central characters for Bodily’s epic narrative.

“I’ve been spending every day with these characters for the past three years. They’re alive to me.”

Black Lantern is truly epic—the first book clocks in at 250 pages—and Bodily estimates that it will take him three more volumes to tell the story in its entirety. As such, Bodily has found himself taking inspiration from the heavy lines and simple designs of cartoons like The Simpsons and especially Scooby Doo, with which Black Lantern shares a sense of spooky fun. Simplifying his art style was sometimes challenging for Bodily, whose work can have an incredible level of detail and intricacy. “Making comics is a lot more difficult than just making an illustration,” he says. “Part of my big approach to drawing is improvising and letting it be what it’s gonna be. But in a comic, you have two illustrations that are right next to each other. If they’re not consistent and don’t look like each other, you notice.” Even so, Bodily’s simplified stye is far from basic—his characters are dynamic and instantly recognizable—and he allows himself to get crazy with detail on some of the book’s splash pages.

On Sept. 30, Chris Bodily launched a Kickstarter campaign for the first volume of Black Lantern. The project was fully funded within six days. Bodily credits this to the connections and friendships he’s made with people over the years. Not only those who helped him to create the campaign, but to those who shared the project, those who have taken his classes and those who follow him on social media. Chris is an easy guy to like, and his enthusiasm for creating art is contagious. Even if you discount his artistic skill entirely (which you shouldn’t), he’s the kind of person whose projects you would want to support. While he is excited to have the project fully funded, he is even more excited to actually get it out into the world. “I’ve been spending every day with these characters for the past three years. They’re alive to me,” he says. “As an artist, I work by myself, so being able to share this book brings it to life. It can go from being my project to being everybody else’s project.”